good overview of valves and their configurations in applied circuits

Abbreviated DCV, these are commonly used to control flow to hydraulic actuators, motors and cylinders. They consist of a valve body, a spool, a lever or solenoid, and a spring.

The spool is the moving part within the valve that blocks or opens ports. They are commonly cylindrical, hence the name Spool.

Example: a 4 way, 3 position DCV has 4 ports (typically Pressure, Tank, output A, and output B) and 3 spool positions.

A common arrangement would be:

This is shown in the following image as the Tandem configuration. 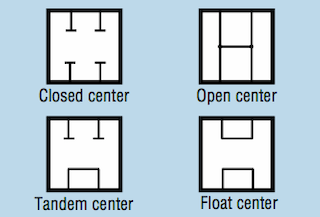 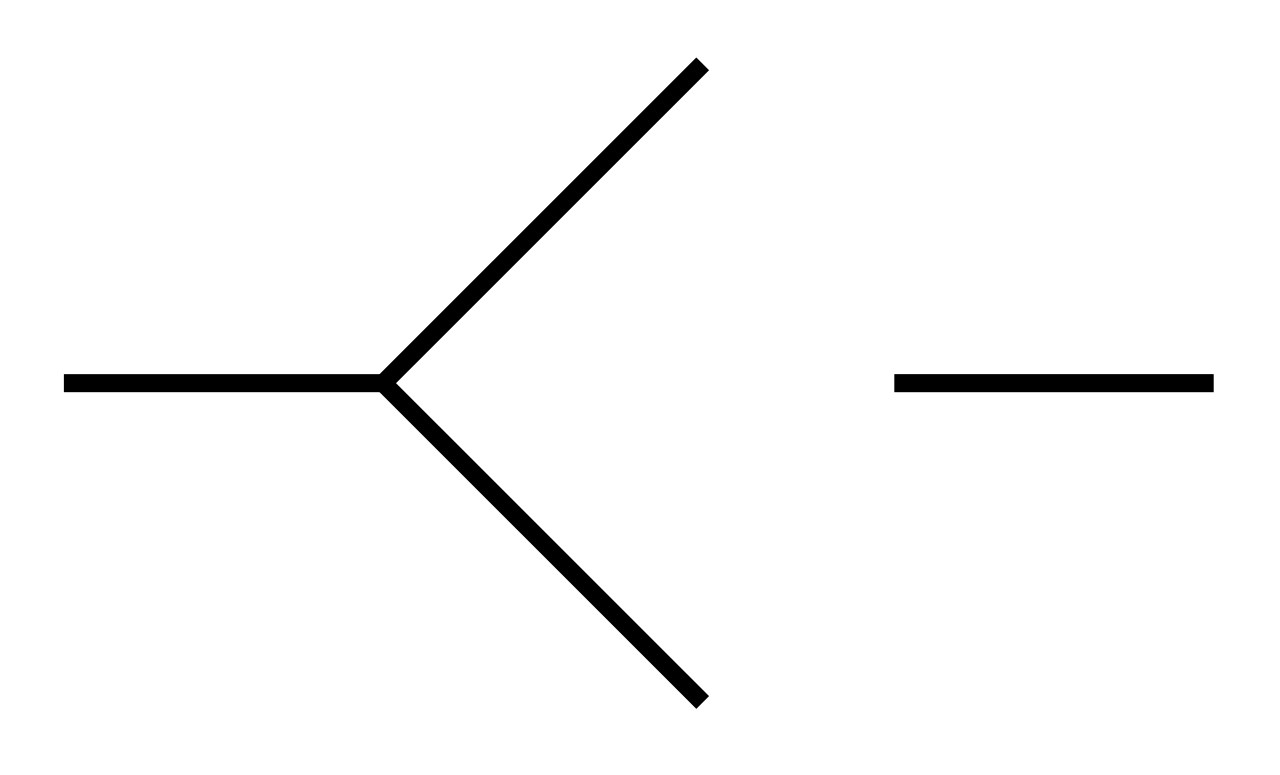 A check valve allows flow in only one direction. Typically these are a simple device consisting of a ball, a spring and a cone shaped orifice that seals with the ball. The spring forces the ball to seat against the cone and any additional pressure further seals the valve. Only flow with enough force to overcome the spring force can flow through the valve, and only in one direction. 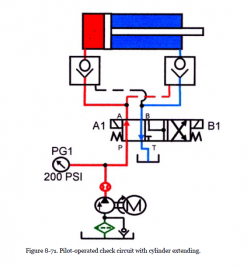 This shows the cylinder extending, and the rod side drain check valve being opened by the pilot pressure from the cap end.
Source:Bud Trinkel

On the left is an example circuit that uses pilot operated check valves that prevents a cylinder from moving when the spool is in the center position. This circuit overcomes the failure of a typical metal valve spool to seal with the valve body.

Pilot Ratio is the ratio of Pilot Piston Area to Valve Seat Area where the pilot piston is the area of the actuator in the valve, and the valve seat area is the area of the valve where the ball seals. An important consideration when choosing a Pilot-Operated Check Valve is the Pilot Ratio in relation to the cylinder's Cylinder Internal Ratio: Piston Area to Rod-end Annular Area. For a 5x8x2.5 cylinder, as used in earlier CEB presses, the Cylinder Internal Ratio is 2. According to Bosch-Rexroth (see links), you must have a pilot ratio much larger than a cylinder internal ratio when controlling flow from the annular chamber (rod end chamber). Thus, the surplus center valve above is suitable for the CEB press cylinder as its ratio is twice as large as the cylinder's internal ratio.

This is easily overcome, so using a pilot-operated valve on the CEB press is possible. If we were dealing with a much larger load and a lower system pressure, the pilot-operated check valve would not work to hold our cylinder stationary.

When Fluid cannot travel from the inlet to the outlet, the pressure buildup inside the valve opens the valve and the fluid travels to the other actuator.

This is from a Weed Badger agricultural implement. They want to spin a cultivator motor but want to be able to also run a swing cylinder to move the cultivator in between trees in an orchard or vineyard setting. The cylinders need to get priority to shift immediately. The sequence valve is used in conjunction with "closed center valves" (all ports blocked in neutral) switching cylinders in an open center hydraulic system.

Example: Soil Mixer 2019. We want to spin a motor nonstop but also move a cylinder quickly when we want to using an open center system. One way to achieve this is with a sequence valve.

I'm not sure but I think the amount of flow to the motor will be proportional to the PSI on the line to the cylinder valve - it's not all or nothing. This is useful for our application. We can flow control the cylinder and still have flow going to the motor. The sequence valves are sold in high, medium, and low switch-point models. 40-350psi low, 350-1700psi medium, and 1400-2500psi high. Using a medium set-point sequence valve, we could divide flow between the motor and the cylinder for the duration of the cylinder's actuation. Once again, not sure.

Priority-type set a flow for one output branch and put excess flow to other output.