1. IHS (initial height sensing)- this is the touch off height or pierce height for the torch (pierce at 150-200% of the cut height). Capacitive sensors would work best for thin material since a mechanical switch could deflect the material giving a false reading. Two chips I have used for touch screen buttons are:

These provide baseline sampling compensation so they act like a switch more than a sensor but for the initial height sensing I think they would work well.

2. Cutting height- is determined by the plasma torches cutting voltage, since the plasma torch uses constant current a 1% change in voltage (100 to 101 volts) is equal to several thousands (typically .015 or more) of arc gap change. This voltage can be read directly from the plasma torch, most torches have a voltage output (example):

This can be measured by a a/d on a microcontrol but needs to be isolated first. The sample rate should allow a A/D reading every .5 second.

The Atmega1280/328 sample rate for a A/D is 14 clock cycles the A/D has a internal clock that should be set to the lowest sample rate of 50KHZ this will help with noise and give a more accurate reading, also as many IO ports as possible should be in High Z to ensure better reading. It seems like a half second latency is the cutoff for sensing and correcting at 25KHZ 14 clocks would give 1785 samples, to deal with noise probably 50 samples should be averaged, most commercial systems are claiming a 6Khz sample rate. 10 bit resolution gives a 1023/AVcc if a 5v system is used that gives 4.88mV resolution.

2V/4.88mv resolution gives 0-409 range or .244V resolution from the plasma torch or theoretically 3 mill this should be fine.

3.Event monitoring- needed to monitor crash/limit switches and also torch control variables, if the torch slows down as in a curve the voltage will rise and cause a erroneous lower of the torch. These conditions need to be addressed in software.

Use with grbl The G code is parsed from serial input checked for exclusivity in command structure then parsed into a block which is stored in a ring buffer the ring buffer is read out one command at a time utilizing the fixed timer1 interrupt (TIMER1_COMPA_vect) to run the pulse event and timer2 compare to clear the stepper port I/O. They use different motion envelopes to interpolate speed/distance with each command.

Integrating a THC- To integrate the torch height controller four components would need to be integrated (limit switch, z axis motor control, two height/ A/D sensors and G-code parsing for a M command). Since grbl already controls the z axis in software a new block could be designed for each stage of torch setup, touch off, piercing, cut ect. The problem will come from integrating the sensors into the program flow grbl is right now a event driven machine either from a serial event or then a timing event to control the the rest of the control structure.

Since the THC is only a specific process for plasma and oxy-fuel cutting I recommend developing a second board to run the sampling and motion control for the z axis while using a plasma cutter this will avoid the problems of:

Latency caused by a conflict with the A/D sample rate and the stepper pulse train. This will decouple the sample rate from the timed execution cycle of grbl.

I/O for future iterations if height and angle are desired as in some commercial applications along with limit switches and sensors the available I/O might get in short supply depending on which Atmel chip is used.

To keep grbl a lightweight targeted code base development of code to run on a separate processor would in my opinion keep the code base cleaner, instead of writing a bunch of exceptions for new timing models.

Use with oxy torch

Most height control systems for oxy torches use a capacitive sensor with a ring:

Direct drive to threaded rod, Thread pitch/step pitch/minimum xy step needs to be computed in regards to compute sample rate for height sensor. Needs one stepper motor for z could use another for angle rotation. Most systems just use some extruded track material and a antibacklash nut to control height. Make sure it can accommodate Oxy and plasma torch head. 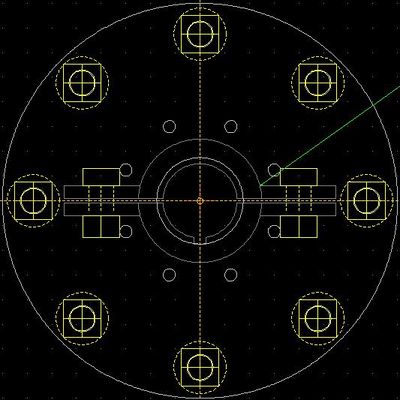 Discussing Bobcat Standard Quick Attach for LifeTrac with Marcin. Trying to log in to wiki with OpenID. 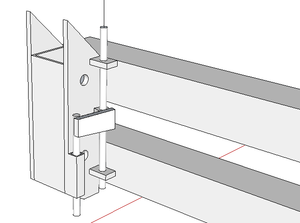