This page provides information for the approximate carrying capacity before vehicle tipping. Additional information is desired to determine structural strength when loaded. Operating load is defined as 50% of the tipping load. 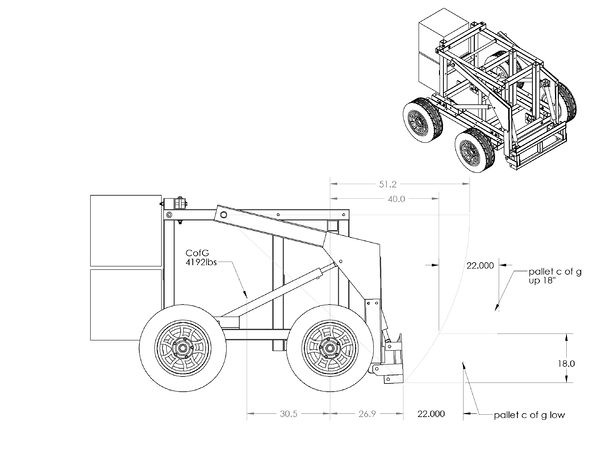 Wanted: Formulas for calculating the force distribution as a function of arm angle 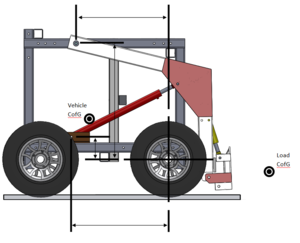 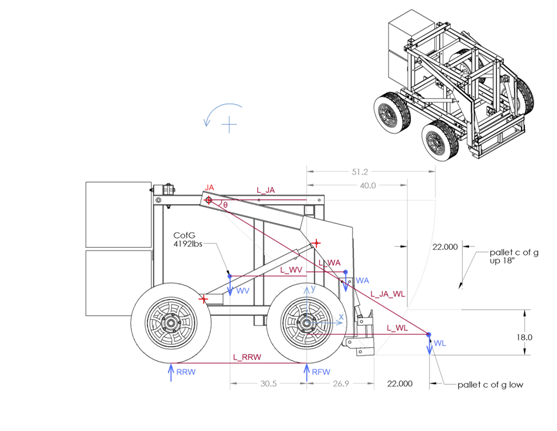 WL: Weight of load (pallet). All the weights are forces i.e. W=m*g.
WA: Weight of arm
WV: Weight of vehicle (without the weight of arm)
RFW: Reaction force at the front wheels
RRW: Reaction force at the rear wheels
L_WL: The distance between the c of g of the pallet (where WL is applied) and the vector y
y: The vertical vector that passes through the axis of the front wheels
JA: The position of the joints that support the arm on the frame of the vehicle
L_JA_WL: The distance between the joint of the arm and the c of g of the pallet
θ: The angle between the L_JA_WL and the horizontal
g: The gravity of Earth ( g = 9.81 m/(sec^2) )

Important: All the weights are forces. You can calculate them by multiplying the mass of each part by the gravity of Earth.

Similar equation can be found for L_WA. Negative value of the L_WA implies that the c of g of the arm lies on the left side of the vector y.


and the mass of the tipping load is: WL_tipping/g

Warning: Tipping load calculations, for the case that the vehicle is decelerating or climbing down a slope, might be also necessary.

Calculations of the static force on the joint of the arm

Warning: This is a rough static load calculation that needs verification. Additional dynamic calculations should be considered. 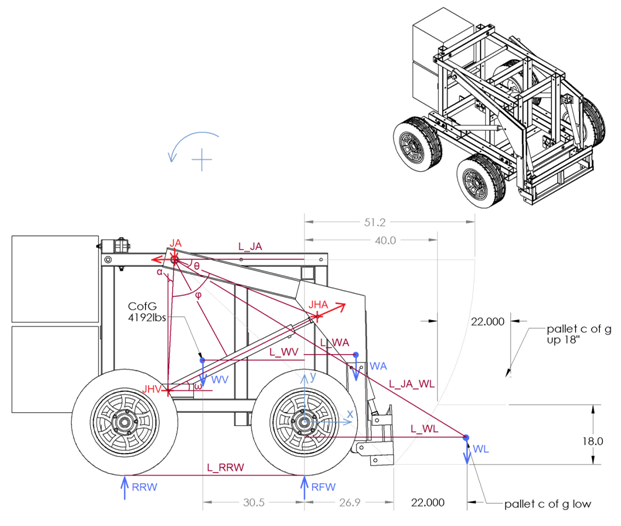 The vehicle is symmetric, so each of the two cylinders applies a force to the arm that equals to 0.5*R_JHA.

The balance of forces at the vertical direction gives:

The balance of forces at the horizontal direction gives:

The total force R_JA is:

This force is distributed equivalently to the two joints between the arm and the frame of the vehicle. Thus, 0.5*R_JA is applied to each joint. If there is no bending on this cylindrical joint, the maximum shear stress is:

This equivalent stress must be less than (<) the tensile strength of the material of the pin divided by a safety factor.

Warning: In reality the problem has three dimensions. Depending on the suspensions of the vehicle and other structural features, additional moments at the direction of x might be applied to the joints. 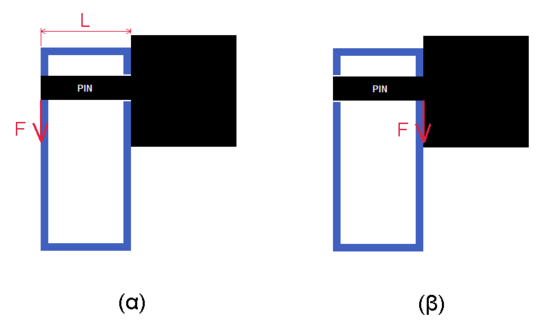 
is the applied moment at the pin, F is the force applied at the end of the pin and L is its length (distance from the start point of the pin to the point that F is applied).


is the second moment of inertia of the cross section of the pin and r is its radius.

In this case, which both shear force and bending moment are applied, the equivalent tensile stress is calculated using the equation below. 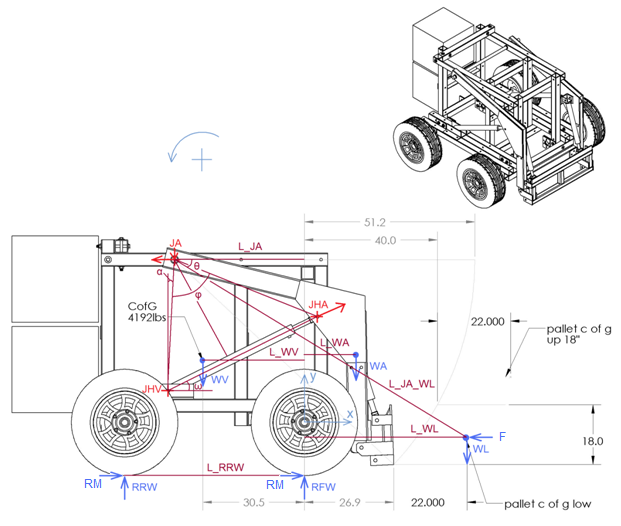 T_max: The maximum torque of the motor that is on each wheel.
r_wheel: The radius of the wheels.


F can be the reaction force that is applied when the tractor pushes the objects. At the picture above it is assumed that the contact point, which force F is applied, is close to pallet c of g. However, similar equations can be solved wherever the contact point is.


The vehicle is symmetric, so each of the two cylinders applies a force to the arm that equals to 0.5*R_JHA.


The balance of forces at the vertical direction gives:


The balance of forces at the horizontal direction gives:


The total force R_JA is:


This force is distributed equivalently to the two joints between the arm and the frame of the vehicle. Thus, 0.5*R_JA is applied to each joint.

The picture below illustrates the base of each of the two hydraulic cylinders that raises the arm. Each of these two identical bases is mounted to the frame with four bolts. These four bolts are distributed in two rows. 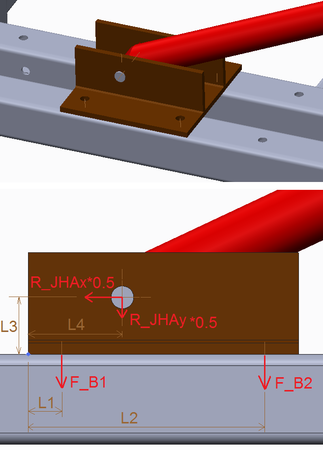 Balance of moments (at the point that is marked by the blue dot in the picture):


Proof: The second equation is derived by the following fact. The four bolts are the same and if we consider them as “springs” they will have the same spring constant k. If δ1 and δ2 are the elongations of the bolts of the first and second row respectively, then (0.5*F_B1)/δ1 = (0.5*F_B2)/δ2 = k. In addition δ1/L1 = δ2/L2 (similar triangles). Although that the elongations are very small, they imply that only the corner of the base is really in contact with the frame (blue dot in the picture). This is true when R_JHAx is far greater than R_JHAy (i.e. F_B2 is greater than zero, assuming that there is no pre-stress at bolts).


If we solve the above equations we find that:


If F_B2 is negative, then there is not tensile force on the bolts and only the shear force is applied. The shear force of 0.5*R_JHAy is distributed equivalently on the four bolts. This means that (0.5*R_JHAy)/4 is applied on each bolt of the second row as a shear force. Thus, the shear stress is: τ_shear = (4/3)*( (0.5*R_JHAy)/4 )/A_B, where A_B is the cross section area of the bolt. The equivalent stress of the bolt is σ_total = 2 * τ_shear, in this case.


Warning: If the bolt is pre-stressed, then σ_total is much greater.


Warning: We must always use a spring washer or a locknut or else the bolt might become loose.


The same method can be used to calculate the equivalent stress on every bolt of the vehicle.

A bolt is pre-stressed when you tighten it more than it is needed to flatten the spring washer. You can use a torque-wrench to measure the torque Mt that you apply when you tighten the bolt. This torque usually remains after the tightening. The additional shear stress that is applied when tightening (because of Mt) is:


A tensile pre-stress also remains, when you tighten a bolt. This additional tensile stress is:


σ_tensile_tighten = E*δ_B/L_B
and it should be added to the load tensile stress σ_tensile that is calculated above.


E is the Young’s modulus of elasticity, L_B is the length of the bolt and δ_B is the pre-elongation of the bolt due to tightening (i.e. the increment of its length due to tightening). It is difficult to calculate δ_B. A rough approximation is δ_B = (angle_b/360deg)*pitch_length, where angle_b is the angle (in deg) that you revolve the bolt when you tighten it and pitch_length is the distance between the two adjacent peaks of the thread of the bolt. However, keep in mind that δ_B is usually less than that because other parts also deform (e.g. the rectangular tube that the base is tightened to it with bolts). 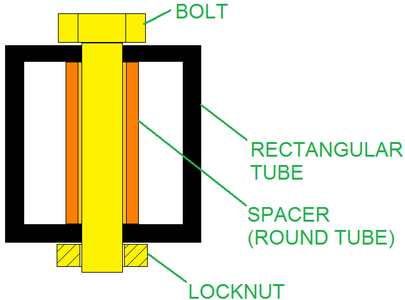 The conclusion is that you should be careful when tightening the bolt because additional permanent stresses are applied to it that might become really great in value. Over-tightening must be avoided.

Calculator for Stress Analysis of each module

File:Calculator for Stress Analysis of each module v0 1.xlsx

A few sets of calculations are written in the above excel workbook that concern some modules which can be used frequently in OSE machine designs. The idea is that since the machinery design is simple and uses standard parts (like beams and bolts), then analytical equations can be used to solve the stresses applied on each part. The goal is to avoid extreme oversizing of the components of the machines and therefore to reduce material and energy waste. The excel application is chosen for the calculations, since it can be found in almost every PC. The equations are also written as a text in the workbook, because it helps to an easier understanding and validation of the calculations and an easy copy/paste to other applications like scilab.


The V0.1 version of this excel workbook calculates: