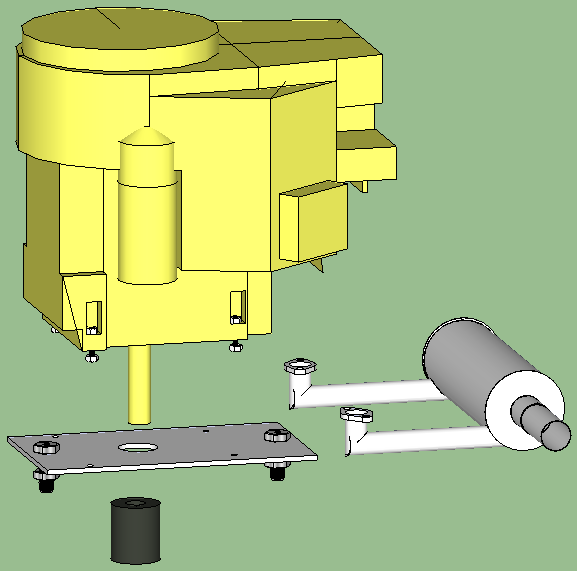 This work hopes to build upon existing development work on power cubes Tom:_Dallas_Log and various discussions. The desire to design a multifuel diesel power cube with similar power output led to both the proposition for using engines with drive on the horizontal axis (a wider choice of engines) and the incorporation in the design for a method to allow diesel power cubes, which will be heavier than their petrol equivalents, to be man handled. 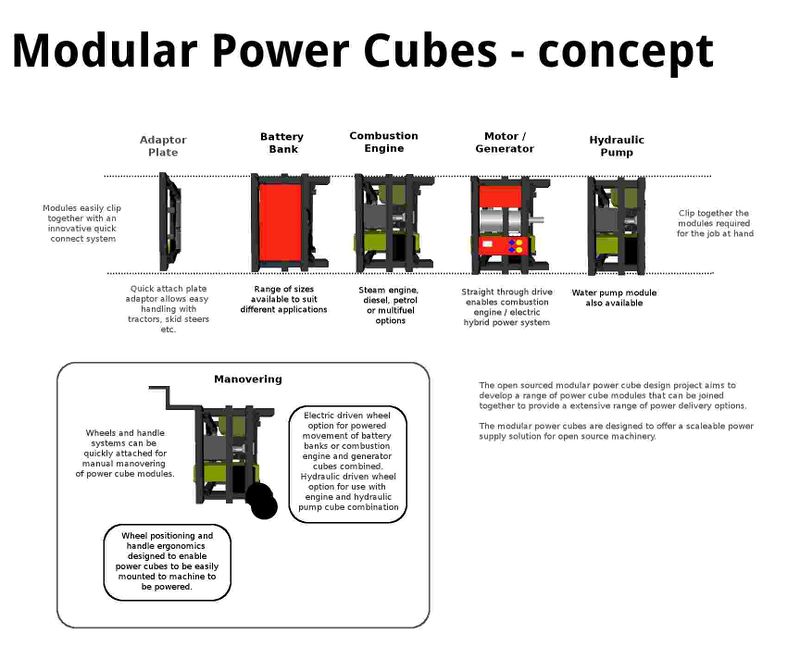 A number of different modules, some which provide energy, others that convert energy from one form to another can be combined depending on application and availability.

A system for joining power cubes would need to be designed. Main criteria for the design would be -

Offering a number of standardised attachment points around the frame would allow mounting, around the power cube, of various components. The power cube frame could also be effectively used as the frame, or part of the frame, for machines - as shown in this MicroTrac concept [2]

Could have either hydraulic, electric, mechanical or no drive. A system that allowed a pair of wheels to be position at various positions from front to back of the cube would allow it to be balanced when attached to other cubes or other attachments. In some applications it may be useful if the wheels can be attached to the cube while it sits on the ground with some mechanism allowing the wheels to then be lowered, lifting the cube from the ground.

Using a battery bank, a motor an engine to provide a source of rotational power (steam or internal combustion engine), and a generator a hybrid electric power source could be created to provide rotational power. The engine could be removed from the machine when a task would require no more energy than is stored in the batteries. There are options to how this could be achieved.

An electric motor provides the rotational power. This is powered by battery bank, with an engine, which is coupled to a generator providing electric power when the batteries are reduced in charge. The engine could be tuned to run extremely efficiently and electrical power produced, above that which is immediately required could be fed into the battery bank.

Combined motor/generator with straight through drive

The weight of some power cube modules or module combinations will negate the possibility for manual lifting. Some thought needs to go into how it would be possible to mount these to vehicles. This will require vehicle design to take into consideration these heavier power cubes. Possible options include -