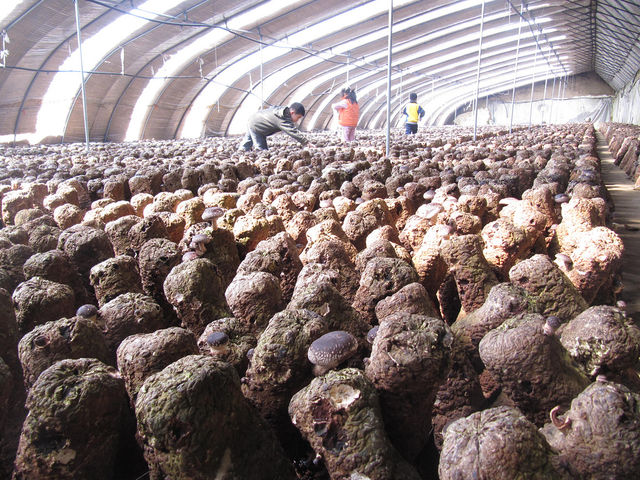 Mushroom Farm in China, using a solar greenhouse, "curtains" down. 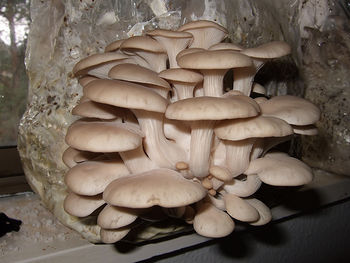 Mushrooms are the reproductive organs and the only visible part of fungi. The fungus organism consists mostly of mycelium, which is a web of very fine strands that stretch invisibly through the soil. The mycelium lives perennially and only produces mushrooms under certain conditions of humidity, light etc.

Mushrooms can fetch quite a high price compared to other foodstuffs, so their cultivation can be quite lucrative. Some edible mushrooms have shown impressive health benefits in studies and many help prevent cancer. Oyster mushrooms (shown to the right) hold a lot of promise for economic development; they grow aggressively in all kinds of substrates, including cardboard. By growing oyster mushrooms, you can transform old cardboard into delicious, valuable, cancer-fighting food.

On a farm, mushrooms can provide delicious food with medicinal benefits while decomposing logs, grass, grain and other organic matter, sometimes including substances toxic to most other organisms, such as oil. Growing beneficial mushrooms also makes it harder for parasitical fungal blights to get a foothold. Sawdust, grain husks, wood chips, logs and manure generated on the farm can be used to grow mushrooms. You can grow mushrooms either on logs or else in beds of wood chips, depending on the species. 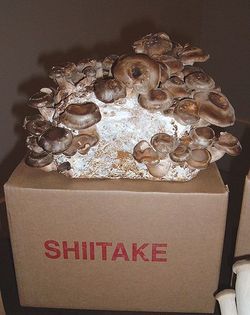 Growing indoors allows you to grow a greater variety of mushrooms than you could outdoors. The main advantage is rapid, constant, year-round yield. By growing indoors, you can grow ten harvests a year instead of one.

It can be recommended to buy the mycelium instead of growing it. This will ensure a better harvest (contrary to no harvest at all), as growing mycelium tends to require more expertise than growing the mushrooms.

The basic challenge is to build a room that can easily be kept sterile to avoid contamination and is equipped for measuring and controlling levels of light, carbon dioxide, humidity and temperature. The room needs to have a controlled air supply which can be sterilized and humidified.

Use mosquito net to keep flies away on all doors and windows, and sticky tapes or other methods to capture flies that have gotten in. Keep the room and material thoroughly clean, as problems often come more from the inside than the outside.

ArkFab are working on Spore v.2 an open-source mushroom grow house made of shipping containers. Their design (here) is projected to grow 80lb (36kg) of mushrooms per week.

Other uses of mushrooms

The mycelium of fungi often form a symbiotic unit called a mycorrhiza with a plant root. The Elm oyster mushroom, hypsizygus ulmarius can be grown in vegetable patches and is said to significantly increase yields.

The plant roots provide the mycelium with sugars, and the mycelium provides the roots with water and minerals in a bioavailable form.

Mycelial strands are only one cell thick, much thinner than any root, and so can reach smaller spaces in the soil to extract nutrients. And mycelium excretes enzymes that plants cannot, breaking down soil nutrients into bioavailable forms.

In addition, beneficial fungi around a plant's roots stop pathogenic fungi from forming there.

For background, please see Appropedia page. Mycoremediation practices involve mixing mycelium (the vegetative part of a fungus) into contaminated soil, placing mycelial mats over toxic sites, or a combination of these techniques, in one or more treatments. The lead researcher in this field is mycologist Paul Stamets. The information presented in this document comes from his book "Mycelium Running -How Mushrooms Can Save the World" (see: Piratebay: Mycelium Running).

Fungi were the first form of life to leave the sea and colonize the land. They prepared the earth for other life to flourish back then - and they can do it again. The role of mushrooms in the ecosystem is as pioneers; different mushrooms secrete a vast range of enzymes that can digest just about anything, including rock, toxins, pollutants, crude oil and chemical warfare agents.

The mycelium of certain species of mushrooms can turn grain husks into useful materials. 'Greensulate' is a low-impact alternative to styrofoam made from rice hulls digested by oyster mushroom mycelium.

Mushroom leather (or "Myco-leather") is an alternative to animal leather that resembles suede but is softer. It is a fully biodegradable material that is easily shaped and tanned. Mushroom leather can be produced as a composite, for example using hemp fibers for improved strength (example: "Myx"). 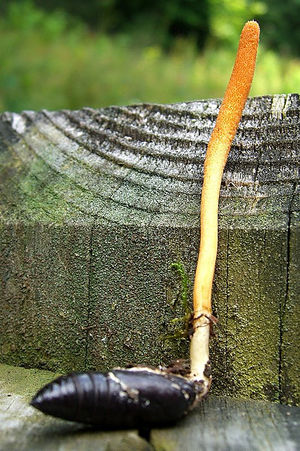 Spores of fungi like cordyceps can infect insects and sprout mushrooms from inside the host's body.
Pioneering mycologist Paul Stamets has patented a technique of using metarhizium spores to repel termites, carpenter ants and other such social insects. The fungus infects these insects, and the insects know it and stay away from any area where the spores are present.

Mushrooms can convert cellulose to ethanol

Put colonized bags in a stream and they can not only filter out hydrocarbons like benzene, but turn them into valuable food.