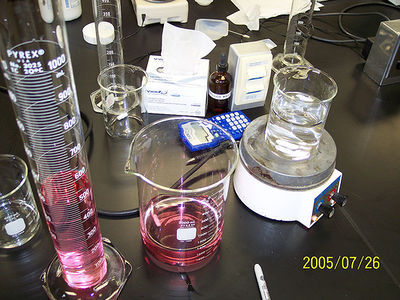 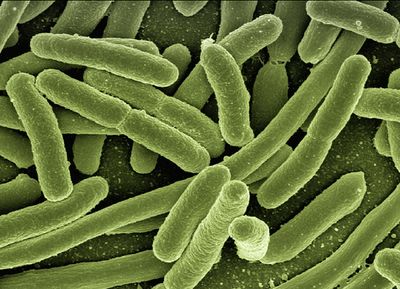 E.coli - the traditional workhorse of biotechnology 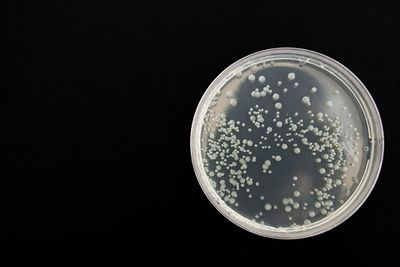 Open source biotechnology is in some ways more challenging than open source software, content or hardware. The unanswered question is: is there a place for an ecosystem based around free "software" running on biological processors ? Biological hacking has the potential to transform health care, address energy problems, mitigate climate change, and more. Or it could wreak environmental devastation and facilitate horrifying attacks by either individuals or governments.

The International Genetically Engineered Machine competition (iGEM) is the premiere undergraduate Synthetic Biology competition. Student teams are given a kit of biological parts at the beginning of the summer from the Registry of Standard Biological Parts. Working at their own schools over the summer, they use these parts and new parts of their own design to build biological systems and operate them in living cells. This project design and competition format is an exceptionally motivating and effective teaching method. iGEM began in January of 2003 with a month-long course at MIT during their Independent Activities Period (IAP). The students designed biological systems to make cells blink. This design course grew to a summer competition with 5 teams in 2004, 13 teams in 2005 - the first year that the competition grew internationally - 32 teams in 2006, 54 teams in 2007, 84 teams in 2008, and 112 teams in 2009. Projects ranged from a rainbow of pigmented bacteria, to banana and wintergreen smelling bacteria, an arsenic biosensor, Bactoblood, and buoyant bacteria.

Traditionally, genetic engineering has relied on techniques such as gene cloning, restriction enzymes and ligation. Introduction of the desired gene into a cell (in a process known as transformation) usually requires an antibiotic resistance gene to select for positive transformants. The antibiotic corresponding to the resistance gene is included in the media and kills (or slows the growth of) bacteria that do not contain the antibiotic resistance gene. There are a variety of techniques that are used to distinguish bacteria containing the fused (ligated) target gene from bacteria containing the resistance gene without the target gene including blue/white screening, target PCR, or gene sequencing.

More recently, progress has been made with alternative techniques such as recombineering, which is takes advantage of homologous recombination in cells undergoing meiosis. The resulting mutated sequence in the target organism may be indistinguishable from a naturally occurring mutation, for example when single-base substitutions are created. Therefore, it is becoming doubtful whether some patents that are based on this technique are actually enforceable. The user of the modified organism could claim that this is a natural, random mutation and there is no way to prove that it is not.