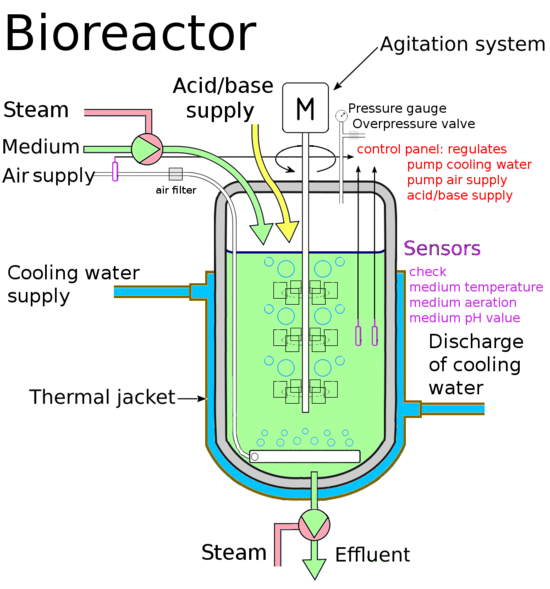 A schematic of a bioreactor as how it works in real life. Note that it may be possible that some bioreactors are also capable of controlling the motor for the agitation, based on the data from the sensors. Some valves are not shown. The steam seems to be used to prevent contamination in/from inlet/outlet pipes.

A fermentor or fermentation chamber is a type of bioreactor for containing and controlling fermenter microorganisms. Fermentation is an economical route to important raw materials (ethanol, lactic acid) and fermented foods. A fermentor must control temperature and keep the chamber anaerobic (free of oxygen) to optimize conditions for desired microbial fermentation. Fermentation is a basic and highly developed art, as well a pursuit of hobbyists. Necessary public information is available to create an economical and high performance OSE fermentor to complete certain product ecologies. A fermentor/bioreactor is proposed to be a component of GVCS III.

Fermentation is a way for microorganisms to continue metabolism when there is no exogenous electron acceptor. Microorganisms are forced to use an electron acceptor that is available endogenously, usually an organic compound. The organism gains high energy electrons by converting the molecule to lower energy forms by catalyzing the breakdown of oxygen functional groups to a lower redox state. The breakup of sugars into a large amount of modified small organic molecules such as ethanol, lactic acid, or acetic acid is useful to an OSE context for its ability to process agricultural feedstocks into desirable materials and preserve foods. Fermentation is carried out by yeast and bacteria, in liquid and anaerobic solids. Silage is an example of solid state fermentation and fermentors are used for solution state fermentation.

In addition to the numerous beer brewing fermentor designs publicly available there are efforts to create an open source laboratory grade bioreactors. 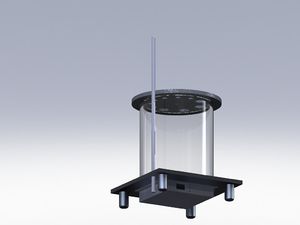 Universidad del Valle, Cali, Colombia contains CAD designs and arduino controller program code. The design calls for a polycarbonate material, which can be sterilized in an autoclave.

The projects description is copied below: This project aims at using an Arduino board to monitor and control a bioreactor from a web interface. A first prototype was build at the Universidad del Valle, Cali, Colombia as an attempt to produce a cost effective and easily maintainable alternative to usually very expensive genuine bioreactors. The setup encompasses a home made bioreactor, an Arduino Mega 2560 board for control and monitoring, an embedded Alix computer as a server and a router.

Open Wet Ware DIYbio has a list of resources for DIY fermentors.

The fermentor should be designed to control the conditions necessary to raise any nonphototrophic microorgansism (see Photobioreactor). An initial prototype should be built to control the conditions for lactic acid and ethanol fermenters. Anaerobic and aseptic conditions must be maintained by being sealed to the outside. Initial designs will be for batch production but allow for configuration for continuous runs with proper attachments. Gas hookups will allow gas exchange with the atmosphere or injection of gas hookups. Top or side ports would allow the removal of broth and addition of substrates. The fermentor will be designed based upon proven laboratory and industry designs, and open source designs.

In order to facilitate high productivity, reproducible results, and rapid experimentation with a variety of substrates, organisms, and growth parameters advanced features that integrate electronic sensors and automated control should be a goal in the initial prototype. 1. Configurable to allow different component hookup such as aeration, dialysis and inputs allowing continuous run
2. pH measurement with automatic base addition
3. Sensors for temperature, dissolved oxygen, liquid level sensor, nutrient density and cell density (via turbidity).
4. Growth programs 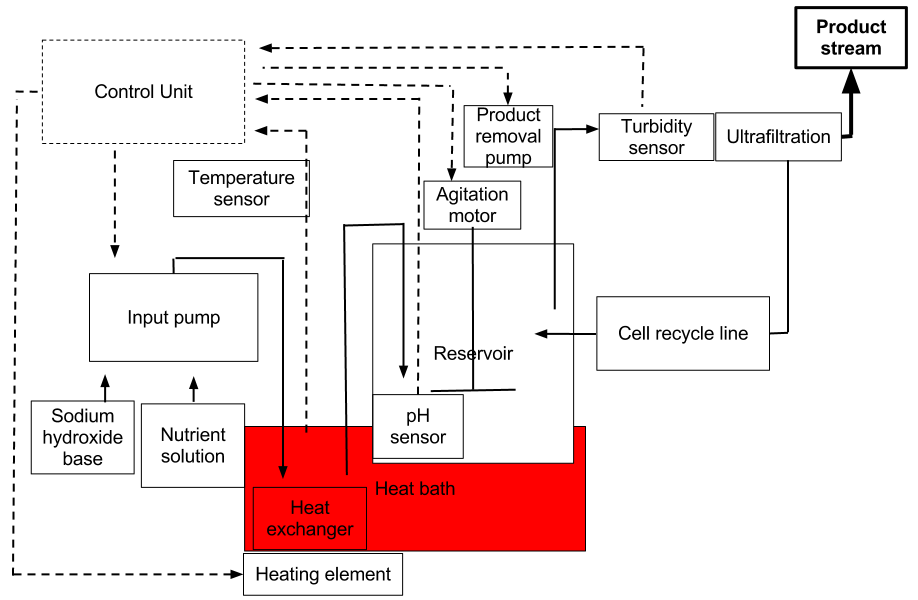 The growth chamber is the core of the system; it contains the growing organisms, defines the environments boundaries, integrates control of the growth parameters, and prevents contamination. A growth chamber can be made from a variety of materials, but must be easily sterilizes and easy to form airtight seals with. A variety of configurations can be used from multi-ported purpose designed chambers, standard lab glassware, off the shelf containers, or custom designed chambers. Material choices include metals, glass, or plastics.

Standard design calls for agitation to be driven by an impeller connected to a motor through the cover plate, baffles may be included to interrupt vortexes. Alternatively a magnetic stirrer could be built into the base plate, there are concerns that cells may be damaged by the stir bar. Rotary motion is the standard method of stirring, but creates undesirable action in the culture media, including vortex movement and cell damage. Linear movement that moves a stir cylinder up and down through the media presents many advantages and is being explored.

The appropriate technology solution would appear to be an overhead impeller driven by a low cost variable speed motor controlled by an arduino controller.

Consideration must be given to sources of heat; either a heated support, internal cartridge heater, heat jacket (solid or liquid state), or in a heat bath. A heated support would be through the use of an external cartridge heater and would be a simple design, but there may be issues with heat transfer. An internal heater cartridge would be the most efficient means to provide heat to the culture, however there would most likely be local overheating. A heat jacket allows heating and cooling of the culture but adds a layer of design complexity. Radiation infrared heating is a new technique that shows promise, an infrared heat source is placed in a metal reflector and placed under the reservoir. Heat baths have been used in the low-cost appropriate technology bioreactors that have been documented in the literature. A combination of these methods may be used.

A heat bath seems to be the appropriate choice for a low cost fermentor and addition and removal of heat from 0-100 C. The external bath is a readily available piece of equipment, which can be assembled from a few components. The water in the bath forms a large thermal buffer keeping the system in steady state, but also increasing the time and energy required to change the temperature.

An arduino controlled water bath is a modest electronics project that has been assembled and described by various netizens; project applications have included sous vide cooking, aquarium and aquaponics temperature control, and DIYbio. The basic setup uses a heating element (500-1500 watt) from household appliances, temperature probe, microcontroller, and a solid state relay. The microcontroller collects measurements from the temperature probe and turns the solid state relay connected to the heating element on or off depending upon the actual and desired temperature. A favored temperature probe is LM35 but must be waterproofed before use, alternatively a thermocoupler could be integrated into the water reservoir.

Sensors to accurately quantify the local environment and fermentation parameters are fundamental to the design of a high performance fermentor that can conduct a variety of production protocols. The parameters that should be measured by prototype 1 are cell density, pH, reservoir liquid level, and temperature.

Cell density can be measured via turbidity, the absorbance of culture at 600 nm. A proposed design is to incorporate a high powered red led into the broth removal line, and a corresponding photodiode with a 600 nm filter pass on the other side of the line.

pH can be measured via conductivity using publicly available circuit designs. Signal output will most likely be analog and collected by a arduino board. Measurements collected will be used to quantify addition of base to the parameter within the desired range.

Methods to measure the culture liquid level are still under review. It may be adequate to balance the flowrate of the product removal pump with the addition of nutrient broth and basic addition adjustment pumps.

A temperature sensor will be incorporated into the water bath and measurements will be collected on the control board.

Arduino is proposed to be the system's microcontroller. The complexity and full automation of the system will most likely require connection to a dedicated computer to handle data logging and user interface.

An OSE fermentor will be designed for small scale production of desired chemical material rich broth from agricultural materials. The design of the fermentor will allow for anaerobic microorganism fermentation to be conducted in a controlled environment with control over many of the impactful parameters of growth and metabolism. The fermentor will be shaped and ported for removal of spent broth, overgrowth of microorganisms, and addition of feed, gases, salts. The design will incorporate key features found in industrial and laboratory fermentors including agitation, level sensors, removal of media and addition of feed during the run for continuous operation, and pH sensing and automatic base addition to maintain an optimal internal environment. Agitation is necessary to maintain optimal mixing of the feedstock with the microorganisms and will be controllable in the range of 1-200 rpm. A level sensor is necessary to accurately control the removal of spent broth and the addition of feed for continuous operation. An electronic pH sensor will be necessary to measure this aspect of internal environment and control the acidification of the environment through the addition of a base. A turbidity sensor, that measures the absorbance at a specific adjustable wavelength (~600 nm), will be used quantify cell density and maintain optimal density for continuous run operations.