Product structure [modeling] is a hierarchical decomposition of a product, typically known as the Bill of Materials (BOM).
—Wikipedia, [1]

BOMs are of hierarchical nature, with the top level representing the finished product which may be a sub-assembly or a completed item. BOMs that describe the sub-assemblies are referred to as modular BOMs.

A modular BOM can be displayed in the following formats:

Domain Theory is a systems approach for the analysis and synthesis of products. Its basic idea is to view a product as systems of activities, organs and parts and to define structure, elements, behaviour and function in these domain.
—Domain Theory, Its Models and Concepts, [3]

According to Domain Theory, a product is seen from four system point of views:[4] 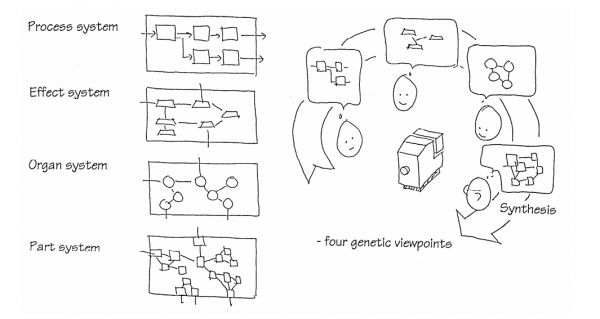 Each of the four structural views indicates possible ways of decomposing a product or product assortment. Functional decomposition seems to be the core of decomposition because it can be argued that functionality is the most important property of a product, i.e. if the product does not possesses right functions then other properties are uninteresting. [4] 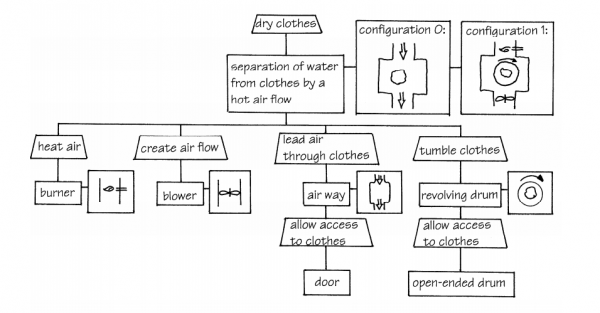 A function-means tree for a tumble dryer, Hansen

Product-Function-Component tree is rooted with product on the top of the tree, and then a merge of functions to next tree-level is made. Since in this stage we know nothing about product sub-systems or subassemblies, i.e. we know nothing about product’s component structure we assign functions to the second-tree level so they will substitute product’s subsystems. Assumption made here is that a product can be broken down into subassemblies corresponding to the functions of the technical system. According to this, Product-Function-Component tree is created by merging two dependant tree structures.

When dealing with functional decomposition, it pays off to have a good knowledge of some basic terms associated with it:

How To Perform Functional Decomposition

Pros and Cons of Functional Decomposition