In a general sense, "concrete" refers to a combination of aggregate (stone, gravel, sand, etc) and a binder (portland cement, epoxy, etc) which hardens into a solid mass. Everyday construction concrete, PCC (Portland Cement Concrete), is based on portland cement. "Polymer concrete" uses polymer resin (e.g. epoxy), instead of cement, to hold the aggregate together.

Concrete is an attractive material for machine tool frames because

Machine tool frames made of PCC date at least as far back as the Yeoman lathe, (see also Zagar) but have never been widely adopted. In contrast, since the 1980s, polymer concrete has become quite popular in construction of precision machine tools, first in Europe and now worldwide [1]. The first commercially important concrete for this purpose was the epoxy-granite composite Granitan, made by the Swiss grinding-machine manufacturer Studer.

Polymer concretes have much better dimensional stability than PCC. Slocum declares PCC unsatisfactory for precision machinery due to:

A scientific paper comparing PCC and polymer concretes in machine tool applications was published by a Studer researcher in 1985. Another article here.

While polymer concrete provides one route to resolving these PCC problems, it is much more costly than PCC and is less compatible with the OSE requirements. It is worth revisiting the application of "plain old concrete" to machine frames with an eye to ameliorate its known weaknesses. Some results cited below suggest that with adequate curing time, surface painting to suppress humidity exchange, and post-tensioned reinforcement, PCC can provide excellent stability.

PCC shrinkage during cure is 0.04 - 0.1%, and shrinkage continues at slower and slower rate for months or years. It is necessary to be patient -- probably waiting 1 to 3 months before considering the concrete dimensionally stable. TBD: do thinner sections stabilize more quickly, and if so, how much?

After the curing process is essentially finished, the concrete remains humidity-sensitive, a bit like wood -- expanding in high humidity and contracting when air is dryer. Concrete also responds to temperature: it has a thermal expansion coefficient close to that of steel. Sealing the surface with paint or similar coating can greatly reduce humidity effects. (This should also reduce carbon dioxide absorption, which causes an additional shrinkage chemical reaction: carbonation.)

In "latex concrete", which is PCC with a substantial addition of acrylic or SBR polymer emulsion, most of the pores are filled with polymer; this tends to reduce shrinkage, make the concrete more stable against moisture-related effects, and make it less brittle. Using acrylic latex concrete for thin-shell roofs is described here. Rheomix 141, a styrene-butadiene copolymer, has also been recommended for that application. It seems likely that one of these admixtures would considerably improve the stability of a cast-concrete machine base.

PCC is strong in compression but much weaker in tension. The loads on a machine frame will typically put some parts of the frame in tension, and these parts must be reinforced. The simplest support is to cast reinforcing bar (rebar) into the concrete mass. While rebar makes the section strong, it also, ironically, is almost certain to make it filled with small cracks. This is because the concrete sets and locks to the rebar long before it finishes shrinking[2]:

To avoid this, the concrete should use post-tensioned steel reinforcement. By maintaining the concrete always in compression, and never above 30% of the ultimate compressive stress limit, the concrete microstructure will remain quite stable[3],[4].

To obtain a dimensionally stable frame, the following steps are recommended:

These folks wanted stability (world's largest laser holography table in 1993[5],[6]) and got this: 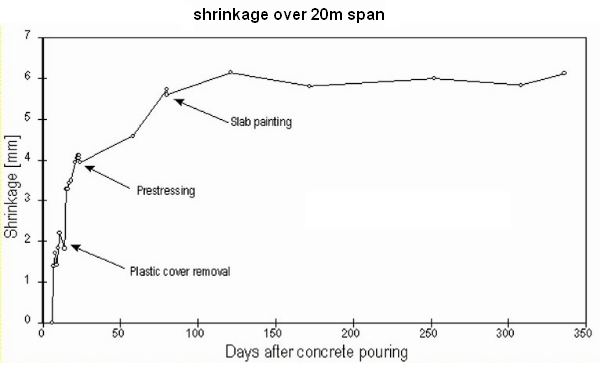 The stability reached after 120 days (~ +/-0.2mm over 20m, ~1e-5) is very promising for a machine tool application. The authors ascribe the residual dimensional changes to seasonal temperature variation.