In a uniflow engine steam is admitted only on one side of the piston. At the point of maximum expansion of the steam, an exhaust vent is exposed allow remaining steam to vent. Thus, steam flows in a single direction: into the cylinder, then out of it. Steam control is done via a ball, bump, or piston valve. 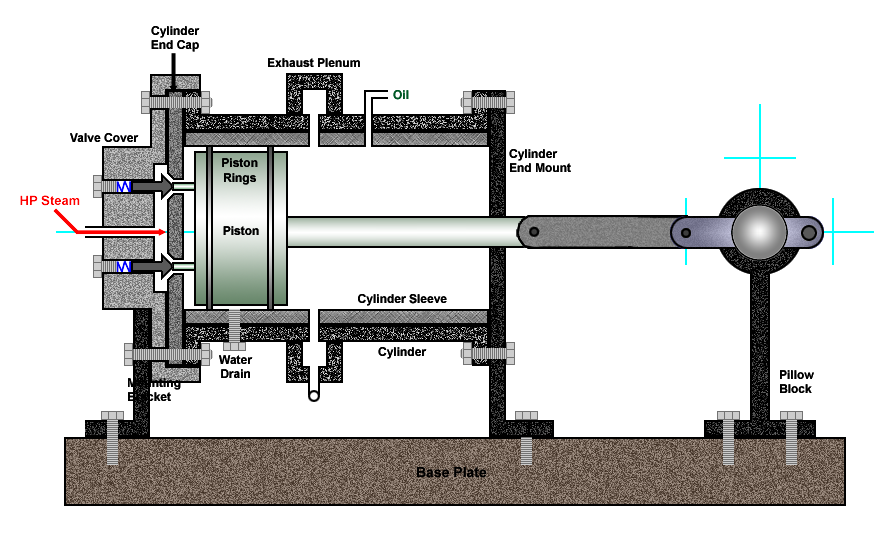 In a continuous flow engine, steam is admitted on either side of the piston, depending on it's position in the stroke. Typically, a slide valve is used to alternately admit steam into one side of the piston or the other and vent spent steam.

A careful examination of the slide valve (in black, center) shows the flow of steam into the left side of the cylinder while venting steam out of the right.

From Steam Engineering: A Text Book by William R. King

Of the two forms of engines, the horizontal and vertical, the former is very generally used in in plants of small and moderate powers. it is cheaper in construction and much more accessible for inspection and repair than the vertical engine, though it occupies more floor space. The main objection to horizontal engines of large power is the difficulty of supporting the weight of the piston and preventing it from cutting the cylinder and wearing it out of true when traveling at the high piston speeds required in modern practice.

It is because of this objection that the vertical engine is used in plants of large power. The shaft of a vertical engine rests in bearings which are part of the bed plat that rests on the foundation, the cylinder being held in vertical framing, thus throwing the weight of the piston on the bearings. The vertical engines runs more smoothly and with a greater mechanical efficiency than the horizontal engine, due to the fact that the unbalanced forces inseparable from the operation of the steam engine are more easily counteracted. In accessibility for repairs and the excessive head room required are it's chief disadvantages.

There are several common styles of conventional valves in steam engines

Some illustration of slide valve designs:

Each of these has their own advantages and disadvantages often depending on steam conditions and desired durability. Please consult an engineering manual such as Valves And Valve Gears for a detailed discussion of this.