These notes are made on "The White Cliffs Project - Overview for the period 1979-89" [1] by S. Kaneff, Australia National University. 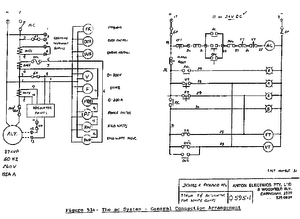 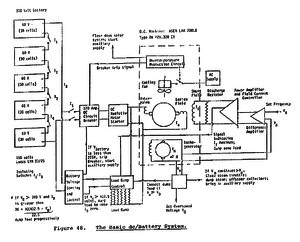 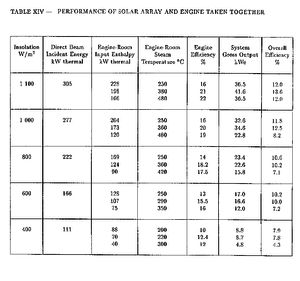 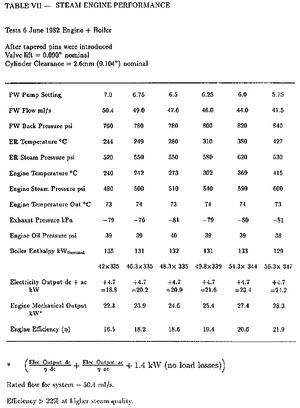 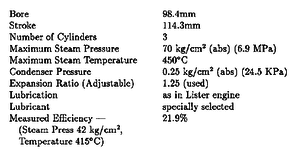 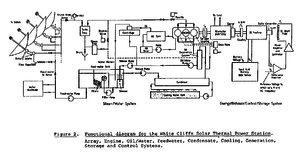 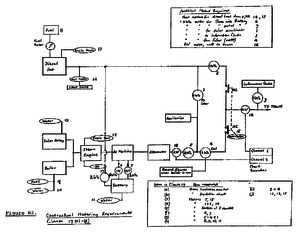 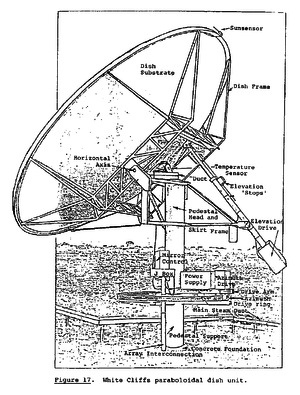 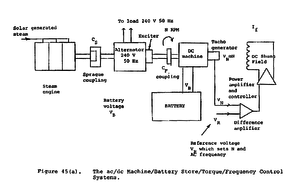 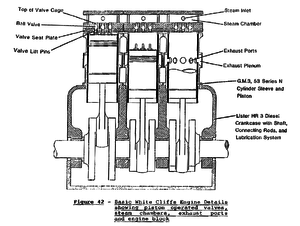 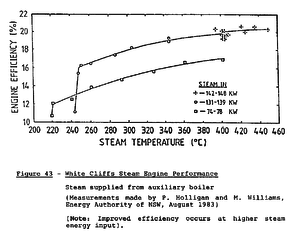 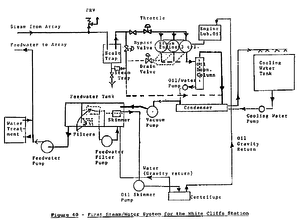 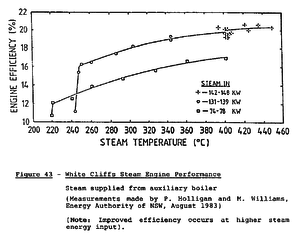 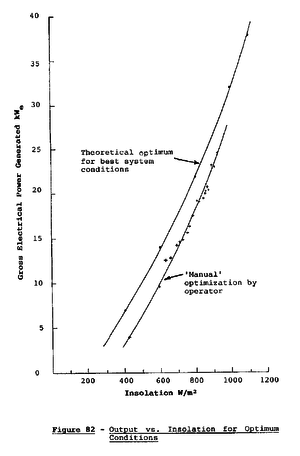 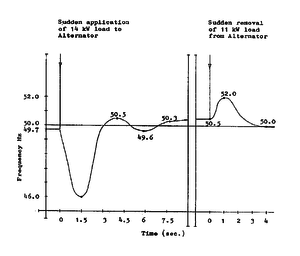 Feedwater at pressures up to 7 MPa (70 atmospheres) pumped in parallel through the absorbers of 14 parabaloid dishes.
Tracking in azimuth and elevation through two rotary joints in each collector.


When steam exceeded 180 degrees C, a bypass valve closes causes pressure to build. When pressure reaches 2.7 MPa, a throttle valve opens and the engine starts. An electric starter motor ensures correct rotation of the engine. Engine speed increases as it warms up. When 1500 rpm is reached (synchronous speed for 50Hz), further speed is applied to an AC/DC rotating machine set through a free wheel devices (this is a kind of govenor? - mjn)

Excess energy is stored in batteries.

A thermodynamic steam trap is used to prevent water from entering the engine - only steam.
Exhaust steam is condensed and recirculated. Oil is removed from the condensate by filter and centrifuge and by a vortex chamber.


Removal of lubricating oil from the exhaust steam and condensate was a challenging part of the project.

To reach 23% heat to mechanical efficiency, steam quality can reach up to 500degC adn 7 MPa.
Oil is injected into the cynlinders t o assist lubriation.

The report indicates that building the steam engine was the major part of the project. The solar collectors posed minor problems.

A Bill of Materials is presented on pg. 255.

Graphs show the effects of cloud cover on insolation.

Steam engine was based on a design by Cmdr. G. Vagg. 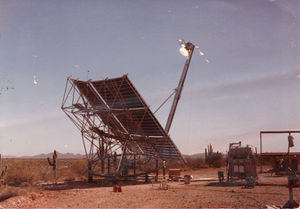 Lots of information on dish design. Details on absorbtion cavity.

The engine has automatic motor-driven valves for:

Water used should be pH neutral to avoid corrosion problems. 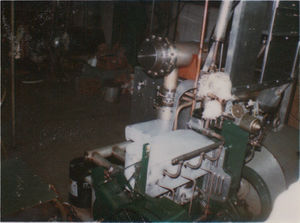 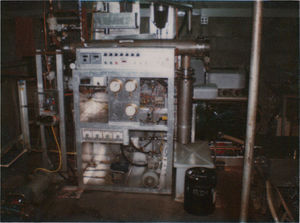 Steam is applied to a chamber in the head of each cylinder.
Engine is started by an electric motor.


As a piston approaches top dad center, the pins in it's crown lift the three ball valves from their seats and steam enters the cylinder until the valves seat again past dead center.

Steam expands while applying pressure to the piston until the piston exposes the normal exhaust ports int he cylinder liner which was made for a 2-stroke diesel engine.

Cylinders, cylinder heads, valve seats, and steam chambers (these are the conversion components) can be made from cast iron, mild steel, and stainless steel (no notes on which material was used for what).

Water can collect in the steam line to the engine which can enter the engine on start up. If there is water in the cylinders, the starter motor can't crank the engine. A motor-operated drain valve was fitted with a port to each cylinder. Interlocks prevent the stater functioning until the drain valve is open. If water isn't allowed to build up in the input lines, this is not necessary. As soon as the engine starts, the drain valve is closed via signal from engine speed. While running, water in the steam is diverted via a steam trap into exhaust lines.

The valve mechanism was a major area of development. Extended, reliable operation was only achieved after much attention was given to the geometry and dimensions of the valves. Material and hardness selection was important. 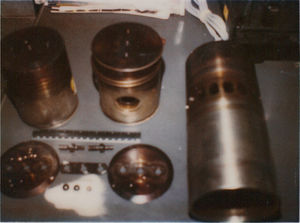 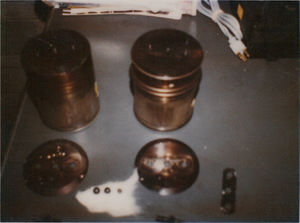 AC and DC machines are mechanically coupled to the engine via a freewheel (flywheel) coupling. Digression from 50Hz causes the DC machine field to adjust operation to restore frequency.

When there is no solar steam, the steam engine stops (or may be supplied from an auxiliary boiler). When engine is stationary, the AC/DC set continues to supply an electrical load from betters until 80% discharged (about 1.8 volts per cell). When batteries can no longer maintain the load, a backup diesel engine is brought into service automatically.

The steam system can be operated from either solar generated steam or fuel fired boiler. Conversion of fuel energy to fluid local heat is 85% efficient.

Boiler is constructed from three monotube energy absorbing sections comprising a preheater (tube coil), main heater (tube coil), and a super heater (pancake wniding between the two coils). 19mm OD, 1.6 mm wall thickness stainless steel tubs with welded connections in the heat zone. Insulated by a 50mm durablanket (calcium silicate) in a stainless steel cover. A small 6mm tube can be used to bleed off steem from the main line to clean the monotubes, thus preventing buildup of material on the outside of the tubes.

Unable to get the super heater to produce dry steam.

After initial problems were solved, the system ran for six years with relatively few problems. No design changes. Reliability has been excellent. Power demands have been met.

Hardware problems largely due to poor quality commercial components - pumps and relays especially. Coupling from the engine to the AD/DC set failed after five years (a Morse unit), likely due to inadequate lubrication. Replace with a Borg-Warner unit.

Too high or too low an oil level will cause problems in the steam engine. An oil level switch/alarm was installed. A scavenger pump was added to pump oil from the sump to the oil tank. This also cools the oil somewhat.

"Once we had grasped all of the affective parameters and understood their inter-relationships, we were able to produce very effective operation which we are now optimising,preparatory to developing and building bigger engines, including engines which employ ceramic valve (and piston) components."

The valve mechanism was difficult to perfect.

The final valve assembly has operated for more than 1000 hours with out failure. Ceramic valves and pistons would be cheaper to produce and allow higher operating temps and pressures.

Chlorothene was added at one point to remove oil suspended in water. It worked wonderfully in removing oil from water, but caused corrosion and pin-hole leaks in several parts of the system. Use was discontinued.

Use of commercial components was useful to enable cost effectiveness and maintenance.

The steam engine, with vacuum assisted exhaust/condensation achieved efficiencies of over 20%. This was achieved in part through high quality heat and steam. Use of a vacuum pump assisted in extracting maximum work from the expanding steam (vacuum is presumably on the exhaust plenum).

"Because of the restrictions imposed by license agreements, details of the engine which result in it's high performance are not included."

Engine runs at a constant speed of 1500 rpm.

An identical engine with appropriate valve settings operates at 1800 rpm, output of 49 kWmech, with a vacuum of -70kPa, 420degC steam inlet, and 73degC exhaust temps.

Starting and stopping the system is described on pg.238.