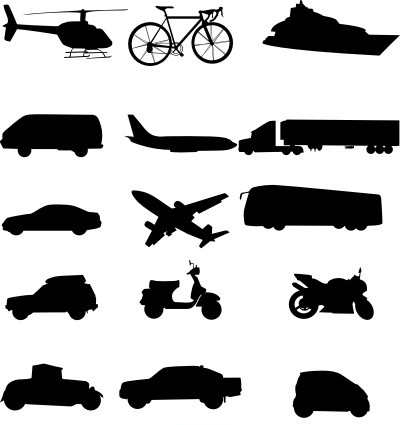 Transport or transportation is the movement of people, cattle, animals and goods from one location to another. Modes of transport include air, rail, road, water, cable, pipeline, and space. The field can be divided into infrastructure, vehicles, and operations. Transport is important since it enables trade between peoples, which in turn establishes civilizations.

Transport infrastructure consists of the fixed installations necessary for transport, and may be roads, railways, airways, waterways, canals and pipelines, and terminals such as airports, railway stations, bus stations, warehouses, trucking terminals, refueling depots (including fueling docks and fuel stations), and seaports. Terminals may be used both for interchange of passengers and cargo and for maintenance.

Vehicles traveling on these networks may include automobiles, bicycles, buses, trains, trucks, people, helicopters, and aircraft. Operations deal with the way the vehicles are operated, and the procedures set for this purpose including financing, legalities and policies. In the transport industry, operations and ownership of infrastructure can be either public or private, depending on the country and mode.

Passenger transport may be public, where operators provide scheduled services, or private. Freight transport has become focused on containerization, although bulk transport is used for large volumes of durable items. Transport plays an important part in economic growth and globalization, but most types cause air pollution and use large amounts of land. While it is heavily subsidized by governments, good planning of transport is essential to make traffic flow, and restrain urban sprawl.