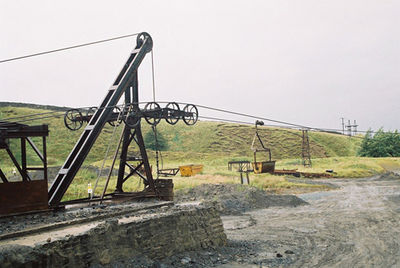 Simple, inexpensive yet powerful technology. One of the most energy-efficient forms of transporting goods and people. Relatively easy and quick to set up, operate and take down again. The most common materials used for constructing ropeways were first wood/fiber and then steel/steel ropes. The introduction of steel ropes and electric motors was a major efficiency boost, so these should be the preferred option.

In mountainous regions, a ropeway may be powered by gravity alone (see links below, Nepal). This has opened up opportunities for high-volume, low-cost trade between high-altitude mountain communities and low-altitude communities. Costs are fixed, and are dictated only by the cost of the ropeway infrastructure. There are no energy costs. A mountain community may deliver construction materials (e.g. stones, bricks and sand; all with low embodied energy) or minerals. A lower-altitude region may deliver finished products or biomass/biofuels to the mountainous region. 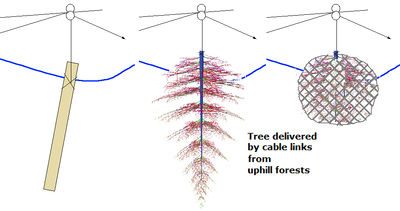 Part of mobile unit for biomass transport (image from: Biochar BC)

Biochar is becoming increasingly recognized as an important soil amendment and strategy to reverse climate change. Some regions of the world, such as the semi-arid drylands, have little capacity for producing biomass and biochar. Other regions, such as forests, produce an abundance of biomass but it is often at risk of wildfires, releasing gigatons of carbon dioxide into the atmosphere as part of the normal carbon cycle. Therefore, the production of biochar in forests has been proposed, followed by transport to nearby biomass-poor regions. If done by ground transport (trucks, rail), this would be prohibitively expensive and would make no sense from an emissions point of view.

Aerial ropeways may change that equation, as they have many qualities needed to transport large amounts of biochar energy-efficiently and inexpensively. The energy released from biochar production (heat) can drive a heat engine that powers the ropeway. Even topsoil could be transported in this way, for rapid regeneration of degraded soils.

Some open source hardware development is needed, and may include:

In the Rocky Mountains, there are billions of tons of dead wood that resulted from pine beetle kills. But turning that wood into biochar and leaving it locally would only make it last until the next wildfire (unless buried deep underground). If this carbon could be transported out into an agricultural area without wildfires, that would keep the carbon out of the atmosphere permanently. Same situation in Siberia, where wildfires release billions of tons of CO2 into the atmosphere every year. What if this carbon could be turned into biochar and then transported to a non-forested area, say in Central Asia or Mongolia ?

Modern ropeways could be installed to facilitate urban-rural transport. There is vast potential in re-establishing nutrient cycling systems betweeen country and city. Processed organic waste from the city (compost, humanure, ash) would be be transported back to the country to be used as fertilizer. The process could even be powered by the energy that is still contained in the waste (by heat engine, such as steam engine, biogas-fired turbine, etc.). There could also be farmers' markets and CSA (community supported agriculture) distribution points along the ropeway, selling products from the country to the city.

Conventional ropeways typically operate at speeds of about five meters/second, or about 20 kilometers per hour. Significantly higher speeds are not practical due to increased losses in the traction cable and its pulleys, guides and so forth. Another limit imposed by the traction cable is on ropeway length. There are long ropeways, to be sure, but for practical reasons these are subdivided into two or more sections, each with its own traction cable and motor drive.

To achieve an increase in speed and the possibility of carrying passengers and freight between cities in competition with railways and roads, while keeping the advantages of a primarily tensile structure, requires some changes, namely:

The result is a cable monorail. For an example of this kind of system, see: http://www.aerobus.com.

Aerobus, however, was designed primarily as an urban "people mover," so it doesn't meet all our requirements for an interurban transportation system.

One problem is that the track is allowed to bow upwards between supports when there is no car running on it. This leads to significant vertical distortion of the track as the car passes; the rate at which this can be allowed to happen limits the permissible speed of the car. This problem can be solved by replacing the simple suspension system with a two-way cable truss (see Irvine, 1981) which essentially preloads the suspension system and keeps the track straight whether loaded or unloaded.

Another problem is curves: Aerobus uses a rigid rail for changes in direction. This is expensive structurally and economically and favors small-radius curves which impose speed limits and difficulties with the car's suspension. What is needed is a method of supporting gradual curves with cables alone, just like the straightaways, along with a track design that allows the cars to "bank" or lean into the curve - in other words, a track that is torsionally soft without sacrifice of tensile strength. This problem has not yet been solved, but is probably solvable and is under study.