How It Could Work Now

1) Start with a Pandora Handheld. It's an open source portable computing/gaming platform. Not only can it run the high level programs necessary for communication and programming, it has built-in controls for translating operator input into control signals (video game controls). Since it has Bluetooth and wireless built in, a machine operator could step outside of the machine and walk around, while still controlling the machine, maybe to get a better view.

2) Build the UAC around the open source Papilio FPGA board acting as an Arduino shield. It can provide instantaneous logical control of the machine and the Arduino can provide higher-level functions like floating-point math. The most important reason to use an FPGA is that it can simulate all the expensive chips that would otherwise be necessary to control the actuators and interpret sensor signals. Simulating the chips, rather than buying physical chips, will realize an order of magnitude cost savings in some of the more complicated machines.

3) Construct a docking station. This would be a permanent part of the machine and would connect the UAC to all the RIUs on the individual axes.

4) Connect the docking station to the RIUs. Copper wire is probably the most straight forward. Plastic optical fiber is a possibility.

5) Build axis-specific RIUs. The RIUs (Remote Interface Units) will have no logic on them. All they will do is convert the serial signals from the UAC into amplified control signals and then convert the sensor signals into serial data for transmission to the UAC. The core of the RIU will be generic, but the amplification and connections can be specific to the actuators/sensors in the axis.

Along the lines of a universal power unit like the power cube it makes sense to create a universal controller that can be "plugged in" to whatever actuator system you need to control. Why let the control electronics for a machine sit idle? Take the controller with you and use it in the machine you happen to be operating at the moment. Controller broken for some reason? Switch it out for an identical controller and get the machine working again, then fix the broken controller at your leisure.

The Universal Axis Controller (UAC) wouldn't be automated. It would primarily be used by people as they move between different machines. However, it could easily have an automated control system layered on top of it later.

This approach would push the actuator-specific electronics down to the absolute lowest level. Actuator/sensor units that need to be controlled would have a small custom board physically attached to them. That custom board would basically just be a serial interface and an amplifier. All the logical decisions would happen inside the UAC. The UAC would be complex enough to simulate whatever logic happened to be necessary for a particular application.

This keeps the expensive and delicate electronics safe and allows them to be utilized as often as possible. Additionally, it means that the only electronics that are difficult to access/remove are the fiber optic cables, power bus, and serial/amplifier boards. These are all the most reliable components in the electrical control system. The least reliable ones are inside the UAC, which can be physically isolated and is easily taken back to a workshop for troubleshooting.

The actual UAC itself would be a (small?) box. It would connect to a portable computer through some sort of standardized connection like USB or Bluetooth. The heart of the UAC would be an FPGA. The FPGA would simulate whatever control logic was necessary for the specific machine. When the UAC moved to a new machine, the operator would use either the portable computer or a microcontroller in the UAC to re-flash the FPGA with a new "image."

The UAC would "dock" into a standardized connector on the machine. The dock would be a centralized hub that all the fiber optics connect to. It would distribute control signals from the UAC and consolidate sensor signals.

Fiber optic cables (probably the plastic variety) would connect the Dock to any number of Remote Interface Units (RUIs). The RIU would contain the absolute minimum amount of logic possible. Probably just a single chip to convert the serial signal into discrete control signals for whatever is on the board (and vice versa for sensors). For example, a single Plastic Optical Fiber (POF) cable would run from the Dock to an RIU. The RIU would have a power connection and four amplifiers (transistors or solenoids or something). That would allow pulses sent over the POF to directly step a stepper motor. The stepper driver would be simulated inside the FPGA. Step/direction pulses wouldn't be transmitted, instead the actual step itself would come out of the UAC, be transmitted across the POF, and be amplified at the stepper. Driver electronics are often more than half the cost of a stepper actuator system and they can be largely eliminated with this approach. The RIU would also contain an input for the sensor associated with the axis being controlled by the actuator. For example, the end stop(s) and emergency stop associated with the previously mentioned stepper motor would plug into the RIU and their signals would be serialized and transmitted back to the UAC where the logic inside the FPGA would respond to them.

This control system would sit on top of a power distribution system fed by the Universal_Power_Supply. It would also control the distribution of mechanical power from the power cube. 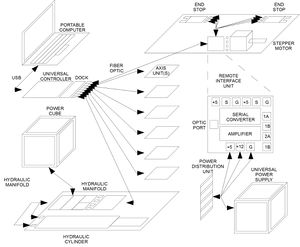 An Arduino using an LED and a photoresistor can pass serial data along an optical cable. Encoders/decoders for RF transmission work. Optics can link an RS232 connection at 9600 baud. Arduino forum

Joystick using no metal at all. The sensing and data transmission is optical. Youtube bkraz333 Fiber optic mouse by the same guy. bkraz333

Copper is more common, particularly in machine control. Whether or not it would be easier/cheaper to produce plastic optical filament or copper wire is not easy to answer. The GVCS is already intended to make metal wire and plastic filament. This subject deserves a full pro/con workup...but the default connection will probably be one of the pre-existing metal wire standards.

Building the UAC to be a robust and arbitrarily scalable system requires some sort of serial connection.

In terms of multi-mission flexibility and future-proofing, fiber optics are superior to metal wire. The single biggest reason to default to fiber optic connections is that they are totally immune to electromagnetic interference. That is important for a project involving lots of machines and high power/frequencies. There is no need to protect or condition the logical signal. Additionally, fiber optics have a greater range of data bandwidth than metal wires. You can send individual ON/OFF pulses, or you can multiplex a hundred different gigabit channels (not on all cables of course). The silica and/or polymers used to make the fibers/cables can all be produced on the farm from local materials. Another reason to default to fiber optics is they are inherently more secure than metal wires; they don't "leak" nearly as much and they're a lot harder to "tap" into.

Commerical Plastic Optcal Fiber (POF) networks can provide 1 Gbps. They are also fast enough to bridge the device/sensor and controller and enterprise networks, which are normally impervious to each other. Basically, you can sit in your office and monitor all your equipment in the field because each one has its own IP/MAC address. Fiber optic installations don't have to be expensive. POF can provide "Fast Ethernet (100 Mbps) over SI-POF links up to more than 150 meters using off-the-shelf red LEDs. (all this came from KDPOF)

Currently, it can be used for point-to-point links up to 75 meters for 100Mbps with support of low-cost repeaters that extend the Flexible Fiber network...Troubleshooting is quick and easy as POF uses a visible eye-safe red light to transfer data from one device to another. POF is the only interconnect technology where the signal can be seen at both ends which makes troubleshooting very easy. A quick glance inside the cable will indicate successful connectivity to the network by showing a red light...There are over 20 million cars using Plastic Optical Fiber to deliver high speed in-car infotainment. Why Use POF?

Wikipedia has this to say:

These are called Field Programmable Gate Arrays. They are sort of the "inverse" of microcontrollers. People normally think about programming a chip with lines of software, which is how microcontrollers work. FPGAs, on the other hand, are a giant grid of identical logic circuits. The FPGA is "programmed" by telling a bunch of the logic units how to connect to each other. After that instruction creates a sort of "image" inside the hardware of the FPGA, it will automatically execute the logic it was "imaged" with instantaneously in real time. Rather than wait for each line of code to execute, all the logical structures run in parallel (sort of).