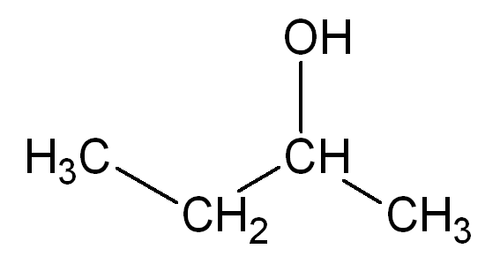 In acetone-butanol fermentation, Acetone and butanol are produced from glucose using strains of Clostridia, which are strictly anaerobic bacteria. Further, ethanol is also produced and therefore this is also often called ABE fermentation. Two distinct metabolic pathways exist (see figure), one producing butanol from starch, the other producing butanol from sucrose. It yields 3 parts of acetone, 6 of butanol and 1 of ethanol.

After brief resurgence of interest in the 1970s and early 1980s, interest in butanol as a biofuel dropped off during the cheap oil era. It has now revived, as it can be used as a direct gasoline substitute in unmodified internal combustion engines. Butanol, when consumed in an internal combustion engine, yields no or very low SOX, NOX or carbon monoxide, all environmentally harmful byproducts of combustion. Butanol is far less corrosive than ethanol and can be shipped and distributed through existing pipelines and filling stations. It does not have the safety problems associated with the infrastructure of the "hydrogen economy". Reformed butanol has four more hydrogen atoms than ethanol, resulting in a higher energy output. It can be used in fuel cells. Butanol is an industrial commodity, with a 370 million gallons per year market with a selling price of $3.75 per gallon. 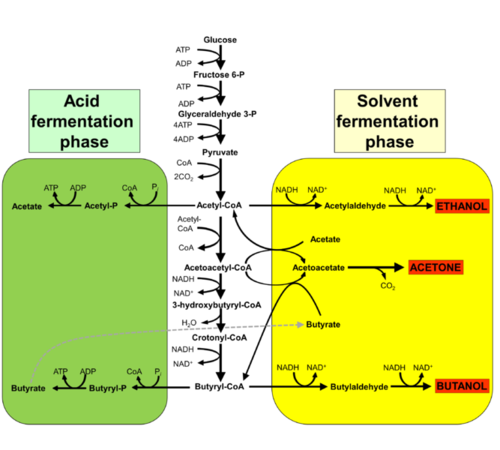 Pathway of acetone–butanol–ethanol fermentation by Clostridia.

ABE fermentation is one of the oldest known industrial fermentation methods with a history of more than 100 years. In the first part of the 20th century, it ranked second only to ethanol fermentation. In 1861 butanol production through microbial fermentation was reported for the first time by Pasteur. This was followed by Schardinger in 1905 reporting production of acetone by fermentation. From 1912 to 1914 strains of Clostridium acetobutylicum were isolated by Chaim Weizmann, showing the ability of fermenting starchy substrate. ABE fermentation was used to produce acetone during WW1 to make the explosive cordite and in the production of synthetic rubber. When Weizmann’s patent expired in 1936, a flood of anaerobic fermentation plants were opened. Molasses fermentation processes grew in popularity as new microorganisms were isolated. Every company had its own unique patented microorganism, which was able to produce acetone and butanol in great amounts from the molasses. In WW2, butanol was produced as fuel for fighter planes. The process disappeared in the second part due to the rise of the petrochemical industry.

Rasmus: ABE fermentation is definitely more complicated and failure-prone than ethanolic fermentation. Main advantages of butanol over ethanol are listed above and may be worth the trouble if appropriate strains of C. acetobutylicum can be developed.

From Wikipedia: In order to make ABE fermentation profitable, many in-situ product recovery systems have been developed. These include gas stripping, pervaporation, membrane extraction, adsorption, and reverse osmosis. However, at this time none of them have been implemented at an industrial scale.