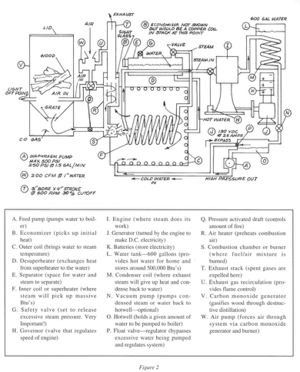 We are proposing an open-source steam engine project, to deliver a highly-efficient modern steam engine with the following features:

Steam power is not taught in general. To master this topic, you should consider having a look at the information in Steam Engine Research/Books Tom Kimmel, of Kimmel Steam Power has some good material [1] as does Mike Brown in a reading list [2]. Description of this system by author and excellent background info on home power steam [3]. Skip Goebel has thoughts on an electronically controlled steam engine taken from [4].

OSE policies on GVCS projects specify that only active, contributing people are considered part of the project team. While we are always looking for people to help out, we need people who are committed to making real contributions. We do not need people who want to talk about building steam engines, we need people who want to design and actually build them. If you are such a person, please fill out the Team Culturing Survey and get yourself set up with accounts on the forum and wiki. All Steam Engine documentation is publicly posted on the OSE wiki.

After joining OSE, have a look at Steam Engine/Things To Do and the Steam Engine Pivotal Project [5]. Pivotal is a project management tool that allows us to track tasks that need to be done. Figure out what you are interested and what matches your skills and experiences. Then get in touch with the Steam Engine Project Manager (Mark Norton - markjnorton (at) earthlink (dot) net).

You will be given one or two tasks to complete before being invited as a full project participant. To some degree, this is a test of your commitment. More than that, it is a way of building trust in your ability to make a meaningful contribution. OSE GVCS Project teams are deliberately lean and agile. The pace can be fast at times and we need you to adapt to the current rate of development.

Although it is a matter of some debate, there are many who feel that our global civilization has past the (so called) point of peak oil. Peak oil [6] refers to the point in time when easy sources of petroleum have been exhausted. Past that point, demand continues to rise (largely pegged to global population growth) but production rolls off. If we accept that we have past the point of peak oil, then how will we maintain civilization's need for energy? While part of the answer lies in reducing consumption, a bigger part lies in alternative sources of energy. The Open Source Ecology project is exploring a number of alternative energy sources. Given reliable energy sources, the Open Source Steam engine can be used to convert steam energy into motion (and thence into electricity, etc).

Steam engines have a number of benefits over other kinds of motive power:

Additional reasons to design and build an open source steam engine include: 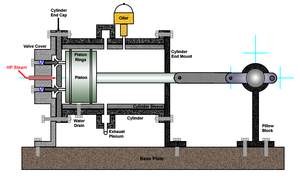 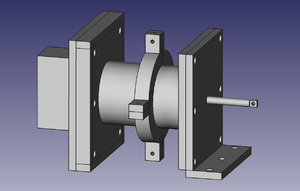 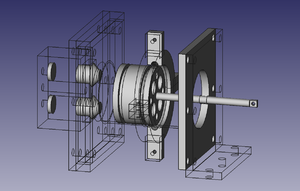 Overall design of the Open Source Steam Engine breaks down like this:

The current OSE Modern Steam Engine is based on design developed for the White Cliffs solar power station in NSW, Australia (see Steam Engine Design/White Cliffs). While the White Cliffs engine used a converted diesel engine, the essential concept is the same: a uniflow steam engine using a bump valve control mechanism. Our engine is greatly simplified from the White Cliffs design. Initially, it will be a single cylinder (scalable by adding more to a common crankshaft) driven by steam from a boiler or solar concentrator (such as Solar Fire). Two bump valves are activated by valve pins mounted on the face of the piston head. Just before top dead center of the cycle, the bump the steam valves open, letting new steam into the cylinder. A flywheel carries the piston past top dead center and at the cut-off point, the steam valves close. Expanding pressure causes the piston to move down the cylinder until it nears bottom dead center, at which point the piston uncovers four exhaust vents allows steam (any any condensed water) to escape the engine. An exhaust plenum is provided to capture spent steam so that it might be used for other purposes (like heating). 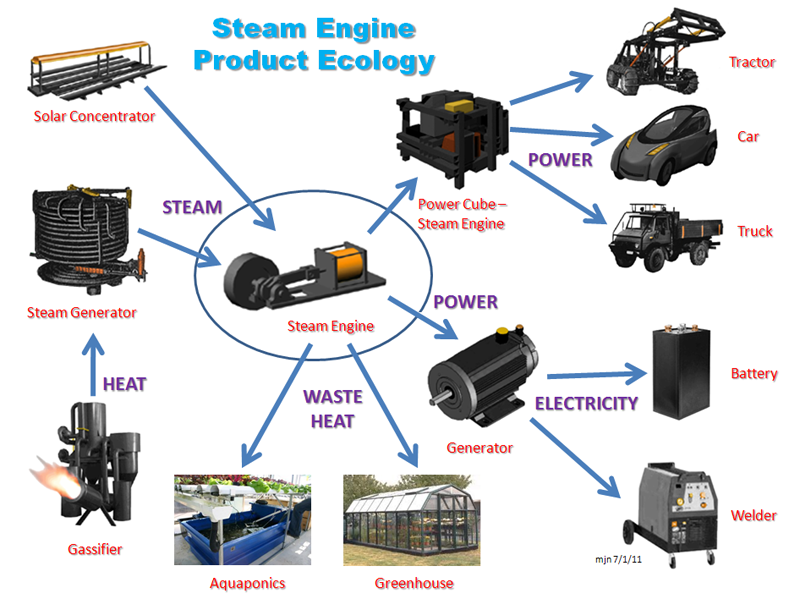 The steam engine gets inputs from:

and provides power to: