Goal of project was to produce a generator with a water production cost of 1 cent per gallon.

Communication with Nina Sinatra from Google X, via Colby 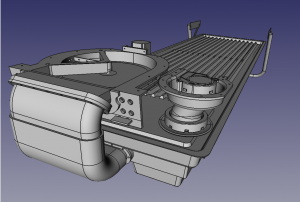 Off the Shelf Options (Not Solar)

Energy Use of X Model

Will send you the other step files this evening, but here is the reply that I received from one of the project engineers (they remembered your talk at X too!) per your question:

The prototype is designed to eventually run on solar power entirely, but expects the incoming energy in two forms: a majority in heat for desorbing water from the sorbent, and a smaller portion in electricity to run 2 fans and 1 motor.

1) Electric power: In this early prototype, we used way too much electricity on the fans. We simply didn't want to spend engineering effort to optimize airflow resistance for a design that would change with every iteration (this was the 4th major iteration). Pragmatically, we also sourced that electric power from power supplies, and not from solar cells (as this is a known art and wouldn't have gained us extra insights, aside from the show effect). We were using well north of 100W of electricity on fans (exact number I would have to look deeper). After a lot of optimization, I'd expect this to be reducible to 20W, or with some luck even to 10W, but we haven't proven this out. Again: the latest design we build is only optimized for airflow UNIFORMITY through key components (air heater, desiccant wheel), but NOT optimized for flow resistance at all.

2) Thermal power: This can be backed out of the data plot we open sourced on slide 9 of our overview deck on git hub [4]. We're sorry that it's not the detailed characterization we had planned to do, but it should give you roughly what you're looking for. The plot shows output (mL/h/sqm) vs. insolation (W/sqm). Together with the area of slightly above 1 sqm, this will come out (heavily rounded) somewhere near 100mL/h/kW_insolation. If you need it exactly, all the numbers can be found across the materials, but admittedly a bit scattered around. This is what we expected for this design, and a factor of 3 lower compared to what we think is ultimately practical after a lot of design iterations. Lots more work to do; luckily fairly approachable. As the plot shows, it's reasonably linear in insolation, but will eventually drop off somewhere below 200-400 W/sqm insolation, where there just isn't enough heat input anymore to support a sufficient temperature differential.