The instructions on this page are intended to guide the designer through the process of selecting bearings that are appropriate in type and size for its intended purpose and load condition.

The selection of bearings includes the following steps: (which are described in further detail on this page)

Determine the direction of the forces that the bearing is exposed to. (The magnitude of the forces will be calculated in step 4.2)

Use the table below to select a bearing type that is appropriate for the load condition along with other attributes of your application.

This section is based on a table found in SKF handbooks and on the Engineers Edge website. 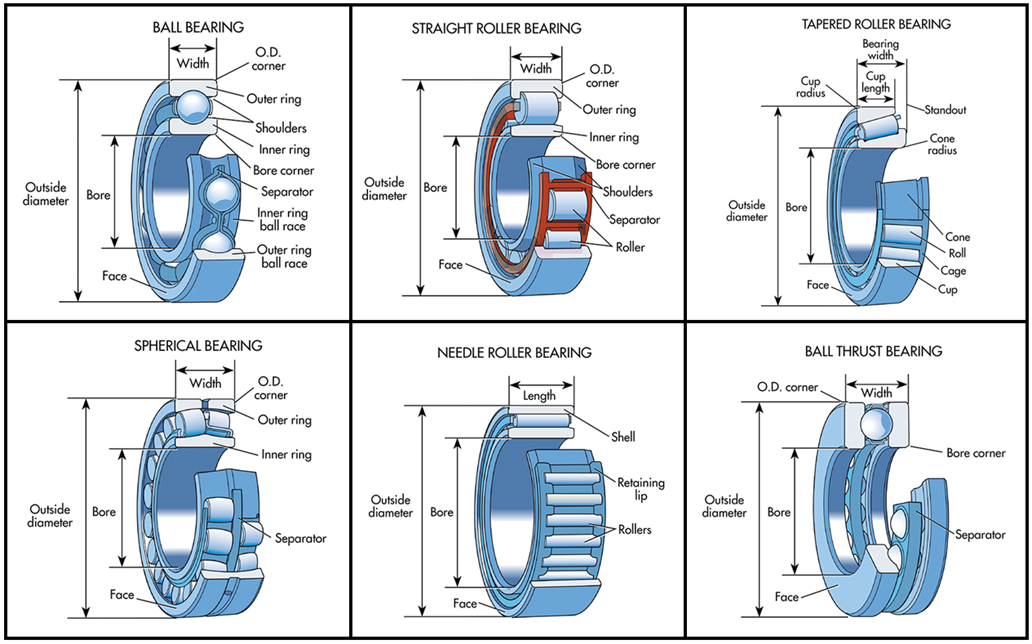 More than one bearing can be used at each end of an axle. If so, their arrangement should be appropriate for the load condition. There are three basic bearing arrangements:

These arrangements can also be combined. 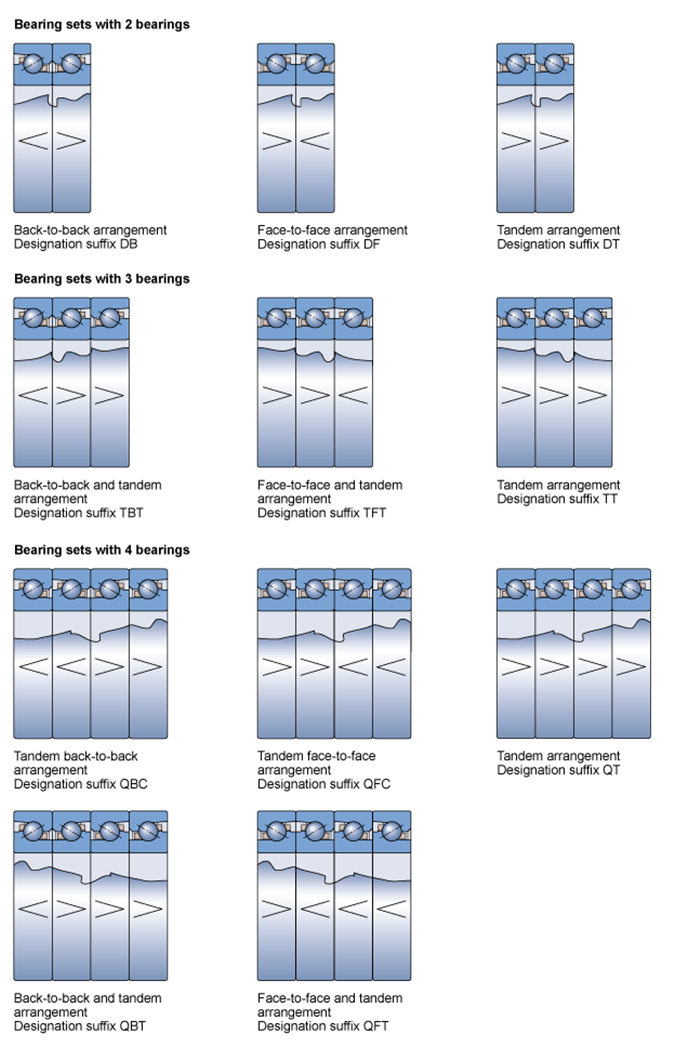 In a back-to-back arrangement, the load lines diverge along the bearing axis. Axial loads acting in both directions can be accommodated, but only by one bearing or bearing set in each direction. Bearings mounted back-to-back provide a relatively rigid bearing arrangement. The wide span between bearing effective centres makes this arrangement particularly well suited to support moment loads.

Universally matchable single direction bearings can be arranged in various ways depending on the stiffness and load requirements of the application. The possible arrangements are shown in the image, including the applicable designation suffixes for matched sets. If misalignment cannot be avoided between the bearing positions, face-to-face bearing arrangements are recommended. They are less sensitive to misalignment than back-to-back bearing arrangements. Combinations of tandem arrangements with back-to-back or face-to-face arrangements are usually selected to maximize the stiffness or load carrying capacity of a bearing set in a particular direction. This is the case, for example, when extended, preloaded, vertical or overhung screw drives must be supported.

This section is based on information listed on www.SKF.com and in SKF handbooks. 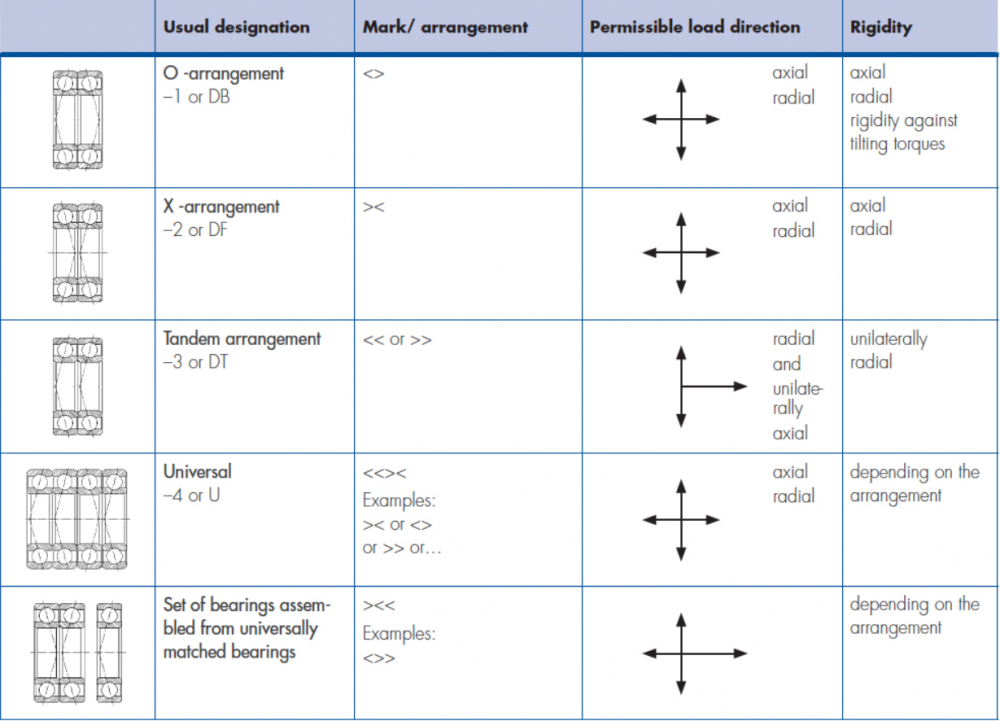 This section describes the steps for dimensioning a bearing using the L10h-formula;

4.1) Select desired value for L10h; how many hours you want your bearing to be operational.

4.4) Determine the value for the p-constant

4.1) Select desired value for L10h; how many hours you want your bearing to be operational

Bearings are dimensioned based on how long they are intended to last before failure due to material fatigue.

If you know the expected service life of your machine, for example 10 years, and want to avoid replacing the bearings during the machine's lifetime, you can select bearings that can be operational for 10 years = 8760 hours.

It is not uncommon for bearings to be operational for 8-12 years if maintained and greased properly.

To calculate a bearing's theoretical service life, we use the formula for calculating the so called L10 life. The same formula is used for both radial and linear bearings.

Some load cases only have radial load, some only have axial load and some have a combination of axial and radial load.

Let’s have a look at an example:

The image below shows an industrial fan made up of the following components:

These additional components are not shown in the image because they don’t directly create forces acting on the bearings: 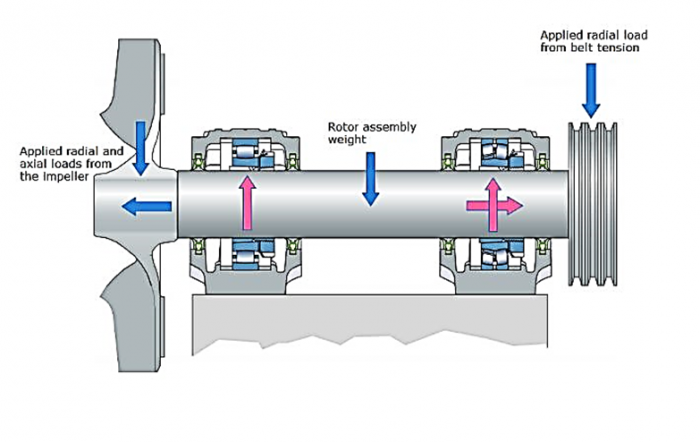 Let’s break these forces down:

1. Assembly weight The full weight of the components in the image are held up by the two bearing assemblies. The force of the weight points perpendicularly to the axle, therefore the load acts radially on the bearings. Here’s the formula for this load:

2. Belt tension The belt between the two belt pulleys must not be loose in order for the small pulley (not in picture) to drive the big pulley efficiently. The tightness of the belt creates a tension force inside the belt which pulls down on the big pulley and the shaft that it’s connected to. When the belt is pulling the axle downwards, it creates a radial force in the bearings.

3. Radial Impeller force As the blades of the impeller spins, they create a centrifugal force pulling on the axle, much in the same way a ball can be felt pulling on your hand with a centrifugal force when you attach it to a piece of string and spin it in a circle. When the axle is pulled in this manner, it pushes against the bearing so that a radial load is created.

4. Axial impeller force The blades of the impeller creates a thrust on the axle making it want to go forward, much in the same way the blades on a propeller on a boat or an airplane makes the vehicle go forward. When an angled propeller blade spins, it pushes water or air behind it. Newton’s third law of motion states that for every action, there is an opposite and equal reaction – so when air or water is pushed backwards, a reaction force in the opposite direction, a thrust, is created which causes the boat or airplane to move forward. Of course the industrial fan is locked down and doesn’t have wheels on it so it remains stationary, but the thrust still creates a reaction force in the form of an axial load on the bearings.

Depending on the load case the formula for P will vary;

when the load is constant in magnitude and direction and acts radially on a radial bearing or axially and centrically on a thrust bearing.

for certain thrust bearings that can only accommodate pure axial loads, such as thrust ball bearings and cylindrical and needle roller thrust bearings, provided that the load acts centrically.

4.4) Determine the value for p-constant

The value of the constant p will depend on the bearing type; 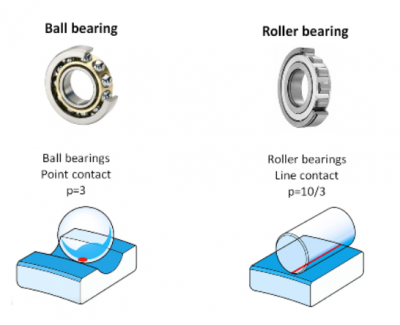 The value for the Dynamic load rating (C) and the value for Rotational speed (n) is listed by the manufacturer or the designer.

Identify a bearing in a product catalog that corresponds to the following:

Try different bearings by inputting their different C-values and n-values to the L10-formula (along with the values calculated for P, and p) until you reach a value that his higher than and as close as possible to the desired L10h-value you selected in step 4.1.

p = a constant depending on bearing type.

If you are interested in a bearing's lifetime in terms of number of revolutions rather than in terms of operational hours, the L10-formula (rather than the L10h-formula) is used.

p = a constant depending on bearing type.

The baring housing, aka known as bearing holder, is the component that supports the bearing. 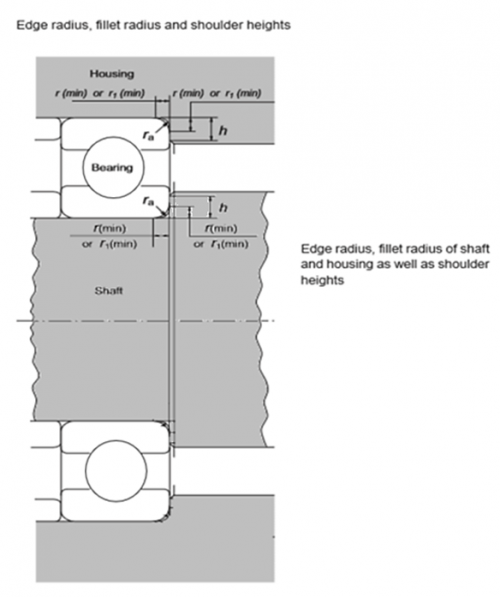 Note: all dimensions are in millimeters. 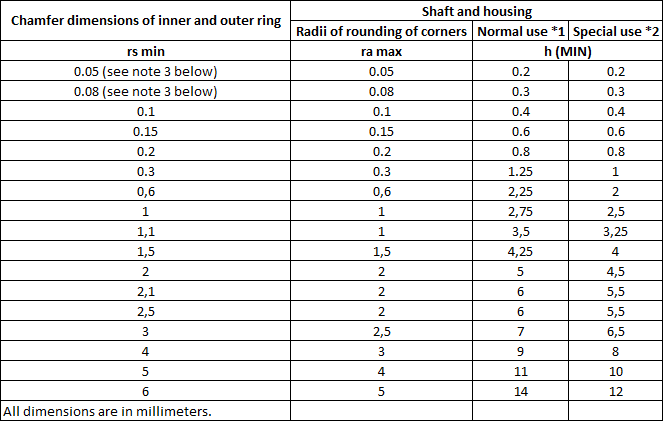 Consider listing values (such as C-value) for bearings that are designed and listed in the Bearing Part Library.