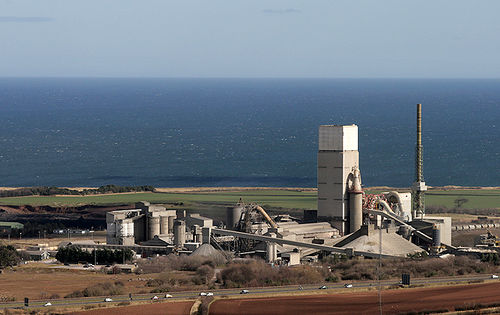 The production of Portland Cement is mostly on a large scale. Can we do it smaller? Picture shows Dunbar Cement Works in Scotland. It uses limestone from an adjacent quarry.

General layout of a rotary kiln

How much cement can you make per kWhr of heat? 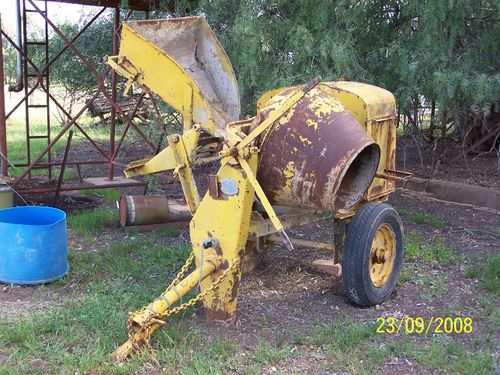 From the foreword: One of the main reasons for the limited expansion of the production capacity of the cement industry has been the choice of technology in favour of large-scale production facilities. Most developing countries, in the past, have opted for large-scale rotary-kiln technologies, requiring large investment and long gestation periods. For a variety of reasons, such as supply-side constraints imposed by energy costs, the size of the market and its volatility, and rising distribution costs, these large plants have neither been able to achieve economies of scale nor have they been able to bridge the demand-supply gap.

The advantages of small-scale, decentralized cement production are being increasingly recognized. The inherent flexibility of small-scale operations to cope with volatile and shifting demands, and their ability to take best advantage of available factors of production in developing countries are the main sources of their strength. Yet, the total installed capacity of mini-cement plants outside China and India remains very limited, mainly because of the lack of wide-scale dissemination of the required information relating to this technology among prospective entrepreneurs.

(source unknown) "My friend Bob Gower, who I talk to primarily through Facebook, his family is in cement. His brother has been doing interesting things making his own cement mixing machines, and making interesting mixes, for quite an enjoyable while. My friend Bob talked to him. He's not into the sustainability model. He just loves cement. We can establish a relationship with him if we have more expert questions about cement." - George D. Gower, P.E. Refractory Minerals Co., Inc. W-610-869-3031x201 C-484-467-2333 refmin@verizon.net

From Practical Action: "Since its invention in the first half of the 19th century, Portland cement has become the most widely available cementitious material. Its dominance over alternative cements has been in part, due to successful, aggressive marketing. This is despite its clear technical disadvantages for certain applications. Alternative cements are not capable of replacing Portland cement totally, but they can be used in the many construction applications where they have advantages. These are as mortars, renders and non-structural concretes. Alternative cements are not normally considered suitable for structural applications, such as reinforced concrete beams and columns."

There is a whole class of cement that was very popular in the days before the invention and manufacture of Portland cement quickly replaced its use. Generally classified as magnesium-based cement, this material was used in historic times, dating back to ancient times in Europe, India, and China, among other countries. It is unfortunate that Portland cement has replaced the use of these magnesium products because there are many ways in which they are superior.

One of the advantages is that production takes place at much lower temperature. This makes it more suitable for community-scale production and makes the use of solar and biomass heat much more realistic. GreenHomeBuilding has some articles about it (longer article here and shorter article here). They mention a natural affinity of Mg based cements for cellulose materials.

There is a TecEco Newsletter dated 2010 "What it takes for Commercialisation of a Carbonating Magnesium Cement" [1] (internal .pdf'd copy here) that lists many different magnesium cements, production methods and patents.

The magnesium cements discussed in the previous section are a re-discovery of natural blends such as the Rosendale Cement that helped build New York City. It is a mix of dolomite (calcium magnesium carbonate), which is a variant of limestone (calcium carbonate), and clay, which forms a pozzolan when heated. The natural blend needs merely to be heated and ground to a powder. As a side note, Portland Cement is a mix of limestone and shale (solidified clay) which is heated and ground to a powder also, so it is part of the same family of cements.

In areas where the natural mix does not occur, you can make it artificially by mixing dolomite and clay, both common minerals. They need to be heated to alter their chemical composition in the range of 700-900C, then ground to a fine powder. This might be done with a solar furnace. Then they are ground to a fine powder. When mixed with an aggregate and water, the cement recrystallizes and takes up the CO2 driven off in the heating process, binding the aggregate. A concrete uses sand and gravel as the aggregate, but soil-cement mixes can also work.

Fly Ash is another potential ingredient. It is the small particles filtered from coal power plant smoke. Having been heated in the furnace, it exhibits the same type of reaction as other minerals do in cements. It is also produced in very large amounts as a waste material. It is already used in some concrete mixes as an ingredient because it works, and is cheap. It might be useful in magnesium cement mixes. The right blend and process for making local magnesium cements will depend on the local geology, so testing and experimentation will be needed.