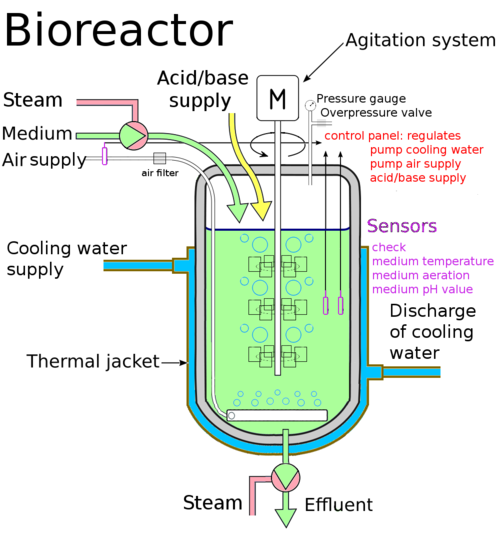 A schematic of a bioreactor as how it works in real life. Note that it may be possible that some bioreactors are also capable of controlling the motor for the agitation, based on the data from the sensors. Some valves are not shown. The steam seems to be used to prevent contamination in/from inlet/outlet pipes.

Dialysis Fermentor Systems for Concentrated Culture of Microorganisms by Gallup and Gerhardt (1963) describes a fermentor connected to a dialysis unit that allowed extremely high cell density and other favorable features. The semipermeable membrane was made of regenerated cellulose and held taut in a frame in a separate chamber.. Feeding could be conducted by exchange at the membrane. Extremely high cell density was achieved with the Serratia marcescens culture. When a reservoir chamber was used to with dialysis tubing a second phase to the growth phase was introduced. Addition of polyethylene glycol can drive the water from a culture and cause them to flocculate (and can clog a machine).

Low-Cost Microbioreactor for High-Throughput Bioprocessing by Kostov et al (2000) details a design for a 2 ml microbioreactor and an optical system to detect the pH, dissolved oxygen (DO), and optical density (OD600, OD). The behavior of the microreactor was compared with a standard laboratory grade 1 liter bioreactor.

To measure pH the ratiometric pH-sensitive dye: 1-hydroxypyrene-3,5,7-sulfonic acid was added to the media. The dye has two excitation peaks, 400 and 450 nm, and an emission peak at 520 nm. The ratio of the excitation from 400 nm and 450 nm shifts based upon pH allowing for measurement of pH. A blue led and UV led are used to excite the longer and shorter excitation wavelengths respectively, and the 520 nm emission wavelength was measured with a large active area PIN photodiode with a filter for 520 +/- 5 nm. A calibration curve of the instrument was prepared in sterile media adjusted with 1 M HCl or NaOH and a pH meter. This is an interesting demonstration which could be adapted to quantifying GFP labeled protein products, however the inclusion of a dye in the growth media is undesirable and a method for immobilizing the dye would be a necessary further step.

Dissolved oxygen was quantified via quenching by O2 of fluorescence of a ruthenium-based oxygen sensor, Ru(diphenylphenanthroline)3 2+. A blue led 460 ± 15 nm filter was used for excitation and emissions measured with an avalanche photodiode module with a mounted 590 ± 20 nm bandpass interference filter. The phase delay of electronics was measured by referencing the red led of the optical density detector. A calibration curve was prepared using a controlled combination of nitrogen and atmospheric air.

Optical density was measured with a red ultra-bright led and a photodetector (PIN photodiode coupled to transimpedance amplifier) with an interference filter at 600 ± 5 nm. Output measurements were measured from the analog to digital converter board. The OD measurements are not linear to Beer's law and accurate measurements up to OD 9 are possible.

An automated home-built low-cost fermenter suitable for large-scale bacterial expression of proteins in Escherichia coli by Riek et al (2008) developed a fermentor from basic laboratory supplies for E. coli protein expression for a cost of $2250 based on new components. A 12 liter reservoir produced by Nalgene is placed in a temperature controlled water bath and agitation is supplied by an overhead stirrer. Filtered air is supplied to the reservoir after going through a heat exchanger in the water bath and exhaust is passed through a cold filter to recapture airborne bacteria. A pH measuring unit was connected to a control unit and triggered a peristaltic pump to deliver NaOH to the media to maintain neutral pH. The cell density (OD) was monitored manually but an automated pipet was loaded to add inducer solution at the desired OD of 10 (activates promoter of inserted protein gene; usually lac promoter and an inducer of IPTG Isopropyl β-D-1-thiogalactopyranoside). Additional pumps were controlled by the control unit for the addition of glycerol (as a carbon source) and an antifoaming agent. The fermentor was successfully operated to produce a number of expressed proteins in yields 10X higher than standard shaking flasks.

The supplementary contains build instructions and a bill of materials. Certain salient details are included such as the configuration of the inputs and outputs for the five ports of the fermentation chamber and detailed supplier lists and parts numbers for the preassembled components. Sterility was maintained by autoclaving heat stable components and storage in 70% ethanol of the probes. Air tight cable glands were used to port the lids and the mixer shaft was passed through a ball bearing sealed with lithium soap and dual teflon discs. The control unit was a MC68HC05B6-microprocessor based control unit (Cat. no. 95 05 80–77; CControl/BASIC), including a “starter board” (Cat. no. 12 10 37–77) and a detailed schematic for the connection of input and output signals is included in figure S2. Despite OD being monitored manually the linear relationship between base addition and cell density was used to trigger the addition of the inducer solution.