Inkscape is an open source drawing tool for creating and editing SVG graphics. More than just a text vector editor, Inkscape provides a WYSIWYG interface for manipulation of vector images, allowing the artist to express himself freely. While other free and proprietary software with similar capabilities exists, Inkscape provides an interface to directly manipulate the underlying SVG code. This allows one to be certain that the code complies to W3C standards. Since the beginning of its development, the Inkscape project has been very active, providing stability for the current software and the capacity for future growth.

FLOSS Manuals has a manual for Inkscape - http://write.flossmanuals.net/inkscape/about-inkscape/

Inkscapes naturally has symbols libraries, such as this, allowing ready drag-and-drop into a working document: 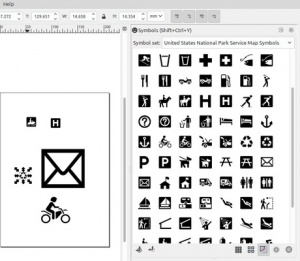 This allows for mass collaborative workflows using OSE Linux. As of 2020, libraries useful for documenting other projects would be useful here. Some workflows for large-scale collaborative design could be:

To Create an Icons Symbol Library

Inkscape supports extensions and many have been created.

The default extensions folder appears to be: /usr/share/inkscape/extensions
Copy the relevant files to that folder and recompile.