A lamella roof, also known as the "Zollinger roof" (after Friedrich Zollinger), is a vaulted roof made up of simple, single prefabricated standard segments (mostly in timber) as a way to span large spaces. The individual pieces are joined together with bolts and/or plates to form a rhomboid pattern. Wooden sheathing covers the structure on the outside. The lamella roof was patented in 1910 and became popular between the World Wars, especially in Germany when metal for construction was in short supply. Some of these structures are now almost 100 years old and many of them remain in very good condition. Sometimes very similar roofs were built with steel (see paper linked below about buildings by Hugo Junkers). In the 1950s, this concept was adapted to the construction of large dome structures by architect Gustel Kiewitt in the U.S.

These roofs are inexpensive, very easy to build (see videos), and elegant. Local wood can be used. The standard wooden segments are short and can therefore easily be mass-produced. There is no need for an extensive temporary scaffolding.

Here are two videos of a test-build in Germany and then real build for a school building in Tanzania (also see Facebook link below).

Possible Use for Greenhouse: "Lamella Greenhouse"

This building technique can potentially used for greenhouse construction. This has been done and looks really good (see examples here and here). Such a "Lamella Greenhouse" may have somewhat lower solar gain than conventional greenhouses (due to the size of the wood panels, which may block some light), but would still be acceptable. Humidity might be a problem for the wood panels. This could be remedied with a double barrier (one transparent foil on the inside, one on the outside). This would have the added advantage of providing extra insulation but would also raise the cost. It might be a good option for cold climates though. It is a possible alternative to 3D Printed Multiwall Greenhouse Glazing. The Lamella Greenhouse could be combined with the Walipini idea (i.e. earth sheltered greenhouse) as well as some kind of nighttime blanket for extra insulation (compare to: Chinese Greenhouse). 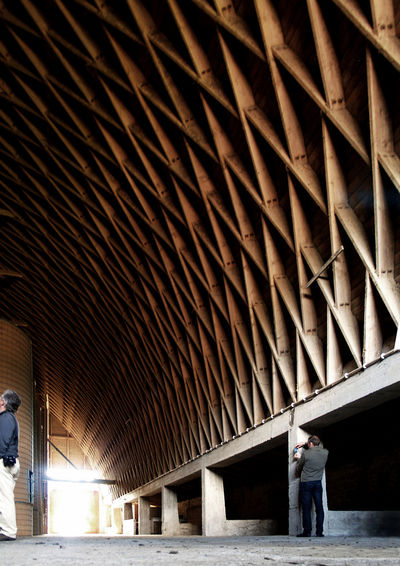 Exterior view of a barn with lamella roof.

Models built for the exhibit: "Weniger ist Zukunft" (Sept./Oct. 2015), Berlin Galerie Mutter Fourage. There is still a Facebook page for the exhibit.
Retrieved from "https://wiki.opensourceecology.org/index.php?title=Lamella_Roof&oldid=142202"
Category: