In regards to economics, there are two broad methods of metal refining: electrolysis and carbothermal. Carbothermal is the current method used for iron, but it works for almost any common metal above a certain temperature threshold.

For iron, the equilibrium favors the right side of the above equation above about 800°C [L'vov]. In the case of aluminum, the full reduction from Al2O3 has two potential reactions.

The first reaction has a favored equilibrium on the right starting at about 2000°C and the latter at about 1500°C [Halman]. In the case of aluminum, only the electrolysis method (Hall Heroult) is currently used.

In my opinion, thermodynamics favors large scale production due to the high temperatures involved. In order to make small scale refinement feasible, two factors are vital; lower temperature and broad applicability. Carbothermal reduction has the advantage that it's broadly applicable. Almost any metal will undergo carbothermal reduction at some temperature, and the use of methane as a feed material almost always lowers the necessary temperature a bit to boot.

So if maintaining temperatures above 1500°C seems feasible, then carbothermal reduction might be the best route, but here is where feedstock and ore come in to cause trouble. Every rock just insists on being composed of a disgusting mess of minerals, and pure ores are the only economical source of pure metals. So if using local feedstock is a necessity, then finding universal purification methods is a must. This is where hydrofluoric acid comes to the rescue. HF will oxidize (well, here the colloquial term might be 'flouridize') anything. Fluorides are, in general, more water soluble than oxides (17.2 g/Kl for AlF3 and zilcho for Al2O3) and most importantly, are volatile and will evaporate. This allows for simple distillation purification [Landis], but in this case, low temperature distillation is likely unfeasible, and hence solution phase separation would be preferable. Once the AlF3 is isolated, it can be electrolyzed with the Hall Heroult process (or any electrolysis method) to form pure Al.

The trouble is that flourine is the mother of all oxidizers, and upon electrolysis it's freed from its AlF3 cage and unleashed upon the world in its full glory. The flourine will oxidize anything; the anode, the chamber, the salt bath, people. In Hall Heroult, the feedstock is generally Al2O3 and a carbon anode is oxidized to CO2, but in the case of AlF3 feedstock, the reaction generates free flourine, which either oxidizes the anode to CF4 or likely hydrogen would be added to the cell to regenerate the HF which then would be pumped out the of the cell. (Don't quote me on that, I'm having trouble finding the HF bond strength at 2000°C, but I think it's favored over CF4). The trouble is that the HF still has to be handled extremely carefully or it will simply fluorinate anything it touches.

In a broad sense, what I'm proposing instead is to simply reduce whatever mix of metals you have access to into an alloy, in this case AlSi and then separate the metallic alloys using a second melt electrolysis. Its not really any lower energy, and in the end, both methods still require a high temperature melting. In the case I propose for Al2(SiO3)3, the second melting step and electrolysis is relatively easy because the two metals have drastically different melting points and electrode potentials. In addition, it's all done with electrolysis and this single cell could be used for both steps if it was built to withstand 2000°C which would require a good deal of forethought.

So overall, no economically viable method exists to reduce a mixed oxide ore to its constituent separated metals. That is what makes this proposition so much fun.

File:Landis.pdf: "Materials reﬁning on the Moon"

Carbothermal reduction reactor for iron reduction, built for future Mars mission by company named ORBITEC. The key here is that CSP is focused on soil (ore) in a methane atmosphere, accomplishing the carbothermal reduction. The other steps (methane reforming via catalyst... catch water... electrolysis unit to make oxygen etc.,) would not be necessary on earth and would unnecessarily complicate the idea for our purposes. Their goal is to release oxygen from the martian soil, our goal is to reduce iron. On earth, it would be simpler to burn the CO for additional heat. Or perhaps more H2 could be generated from CO via Lowe's Process and then fed back into the carbothermal reduction).

High-temperature solar thermochemistry: Production of iron and synthesis gas by Fe3O4-reduction with methane

A. Steinfeld, P. Kuhn and J. Karni Paul Scherrer Institute, CH-5232, Villigen-PSI, Switzerland Weizmann Institute of Science, Rehovot 76100, Israel Received 18 September 1992. Available online 11 August 2003. Abstract Criteria for selecting thermochemical processes that use concentrated solar radiation as the energy source of high-temperature process heat are reviewed. We have thermodynamically examined the system Fe3O4 + 4CH4. At 1 atm and temperatures above 1300 K, the chemical equilibrium components consist of metallic iron in the solid phase and a mixture of 66.7% H2 and 33.3% CO in the gaseous phase. The total energy required to effect this highly endothermic transformation is about 1000 kJ/per mole of Fe3O4 reduced. We conducted exploratory experimental studies in a solar furnace using a solar receiver (with internal infrared mirrors) containing a fluidized bed reactor. Directly irradiated iron oxide particles, fluidized in methane, acted simultaneously as radiant absorbers and chemical reactants, while freshly produced iron particles acted as reaction catalysts. The proposed process offers simultaneous production of iron from its ores and of syngas from natural gas, without discharging CO2 and other pollutants to the environment.

This appears to be one way to avoid undesired byproducts, such as carbides:

Solar Aluminum Production by Vacuum Carbothermal Reduction of Alumina—Thermodynamic and Experimental Analyses - METALLURGICAL AND MATERIALS TRANSACTIONS B - DOI: 10.1007/s11663-010-9461-6 (found here) - M. Kruesi, M. E. Galvez, M. Halmann and A. Steinfeld Abstract Thermochemical equilibrium calculations indicate the possibility of significantly lowering the onset temperature of aluminum vapor formation via carbothermal reduction of Al2O3 by decreasing the total pressure, enabling its vacuum distillation while bypassing the formation of undesired by-products Al2O, Al4C3, and Al-oxycarbides. Furthermore, the use of concentrated solar energy as the source of high-temperature process heat offers considerable energy savings and reduced concomitant CO2 emissions. When the reducing agent is derived from a biomass source, the solar-driven carbothermal reduction is CO2 neutral. Exploratory experimental runs using a solar reactor were carried out at temperatures in the range 1300 K to 2000 K (1027 °C to 1727 °C) and with total pressures in the range 3.5 to 12 millibar, with reactants Al2O3 and biocharcoal directly exposed to simulated high-flux solar irradiation, yielding up to 19 pct Al by the condensation of product gases, accompanied by the formation of Al4C3 and Al4O4C within the crucible. Based on the measured CO generation, integrated over the duration of the experimental run, the reaction extent reached 55 pct at 2000 K (1727 °C). 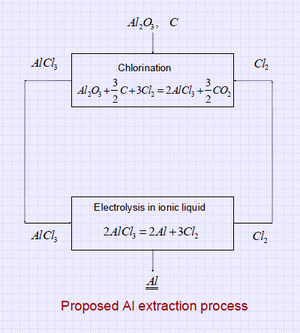 Low-temperature electrolytic refining (speculative): Conventional aluminum refining is a lot like electroplating; but water can't be used as an electrolyte and high temperature molten salts are used instead. Recently low-temperature aluminum electroplating has been demonstrated (Ionmet, Yue et al) using "ionic liquids". These electroplating solutions contain AlCl3, which can be extracted from clay as AlCl3*6H2O by hydrochloric acid leaching; the HCl can possibly be regenerated from the chlorine gas evolved in electrolysis. Several metal oxides are also soluble in recently-developed Deep Eutectic Solvents (DES), which might be the basis of electrolytic refining. 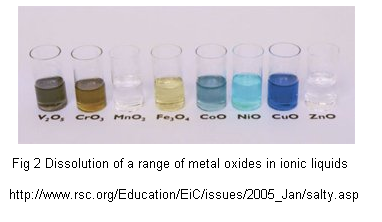