A heliostat is a mirror that tracks the sun and continuously reflects sunlight onto a fixed target. Heliostats are often controlled by electric motors which constantly move the mirror to compensate for the movement of the sun during the day and year. These movements may be calculated by a computer. Alternatively, a photosensor may be used to find the current position of the sun. Large solar thermal power plants sometimes consist of an array of heliostats that focus sunlight onto a central tower.

Heliostats by Leo Gerst at Heliostat.us

Leo Gerst (link: Heliostat.us) has built heliostat prototypes that cost $130 per square meter total for a 2-axis tracking heliostat - using off-shelf parts. This is a breakthrough price achievement, and indicates potential economic feasibility of concentrator solar thermal power using heliostats on a small scale. For example, 30 such mirrors, at $4k - at 30 kW of energy focused on a square meter - could realistically power a heat engine. The detailed price list is: 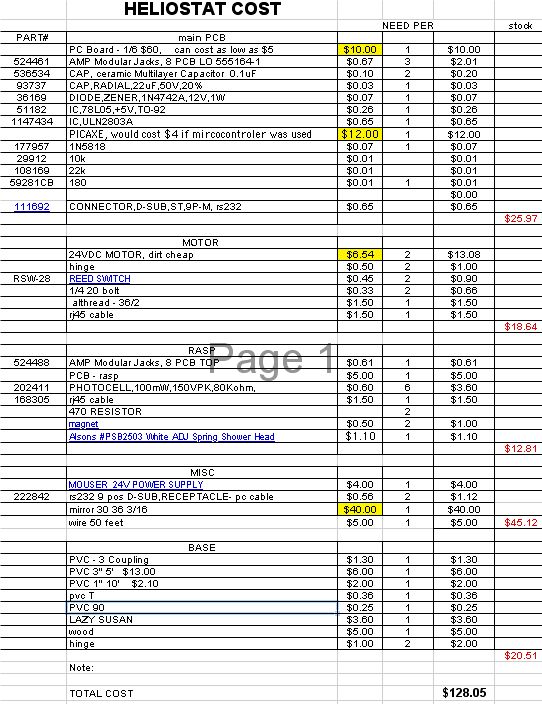 Download the Excel spreadsheet for some sourcing links here.

Conversation of Leo Gerst with Marcin

My (undergrad and only) thesis was actually on designing and building a handheld oscilloscope. I've been working for the past three or four years on heliostats and solar stuff in general, but I don't have any academic papers for you.

I like what you've done, and it looks pretty advanced. Nobody's ever beat a cost of $250 for a square meter of built, installed and actuated heliostat, and it's exciting that your cost is so low. Looking at your youtube video of your mirrors moving, I really appreciate your sensing solution--that's very smart and effective. I think your biggest problem right now is of accuracy. Looking at the step size of your mirrors as they move, it looks like their accuracy is worse than .5 degrees, and the maximum theoretical concentration a field of heliostats is limited by your angular error (as well as the optics of your receiver). I'd work on improving that.

Heliostats are generally used for solar energy. Although not as popular as solar panels, they can potentially give you access to considerable amounts of untapped heat energy for a much lower price, assuming, of course, you build it yourself.

Work by Brendan from heliostats.org

Brendan from Heliostats.org has very detailed information about his open source heliostat project on his blog-like website. His concept uses gears printed out with a Makerbot. The heliostat is controlled by an Arduino.

In general, these are retail prices but without taxes or shipping. There are no costs for installation and profit. It's not meant to be perfect. In earlier calculations I've gotten into the $80 per square meter range and I still think that's possible.

My vision is something like an in-lawn sprinkler system. Central control is in the garage, 10-20 mirrors would be a typical residential installation. A home owner could do it themselves, or hire someone local who could install it all in a day or two and make $500 or so. 10-20 square meters of mirror isn't enough to power your house but if the ROI was 5%-10% it would attract some interest. A mid-tier application might be 100 heliostats generating about 10kW at peak, making the owner about $2K/year for a capital investment of $15K-$20K, so 10%+ return. A larger application would be an open source 'power tower' type configuration with thermal storage and power generation from steam turbines.

Note: For the figures above, the value of generated power assumes available solar energy of 1000 watts per square meter, with the conversion to electricity operating at 10% efficiency (100 watts per square meter). It assumes 5 hours a day of sun, 300 days a year, so this really only works for the US Southwest and similar climates. Power is considered to be worth .12/kW-hour -- whether used or sold back to the utility.

Here is a heliostat which was sent in by Mark. He says that he has had it up and running for about a year now without having to make any recalibrations. It looks pretty cool. He has several more projects on his site besides just this one, so don't forget to check them out too. More information at Heliostaat.nl (in Dutch).

Work by Rob at IwillTry.org

Array of 7 mirrors, each 1′x4′ in size mounted to a 4′x8′ plywood backing reinforced by a 2×3 frame to prevent warping. The frame is supported by a welded steel gimbal mount allowing rotation about both horizontal and vertical axes. Each axis is equipped with a stepper motor and leadscrew to adjust the position. Link here 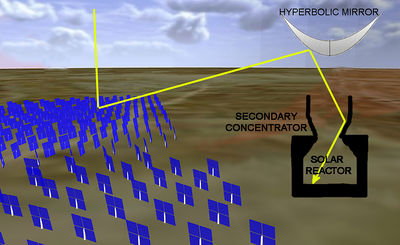 Field of heliostats in a "beam down" Cassegrain reflector arrangement. The array focuses the sunrays onto a hyperbolic reflector which brings them down to ground level where a solar thermal reactor is located.

From Daan van Geijlswijk, daan #at# zininzelfdoen.nl, who is working on an open source heliostat system: http://zininzelfdoen.ning.com/ . One particular focus of this effort is the development of lighting systems for buildings ("sun mirror")

Multiple heliostats can be set up as large arrays, all focusing on one target. They may be arranged in an optical configuration such as a "beam-down" Cassegrain reflector (see right), which makes the energy very convenient to work with at ground level. Such arrays could be built in the agricultural setting, providing energy for a variety of uses on the farm itself and its surroundings (see next section, "applications"). The land could still be used for pasture, with decent biomass yield. A reasonably-sized array would collect thermal energy of 200-300 kW at peak, which might well be enough to make the farm completely energy independent. Note that the array can be focused on various different targets at different times. For some applications requiring high energy density (e.g. steam engine, thermochemistry, metallurgy etc.), the heliostats would focus on the hyperbolic mirror, while for other applications, a nearby greenhouse or large solar food dryer might be the target. The array could also be split up into different groups, reflecting onto separate targets for some time, then realigning again. The farmer would decide ahead of time how best to utilize the expected sunlight on any given day, and program the array accordingly. Having this additional energy available allows more of the added value (food, fuels) to be captured on the farm.

These ideas are featured in more detail at the Open Heliostat Array Project page. 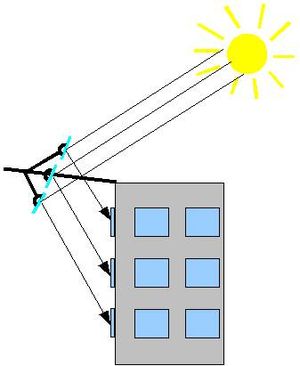 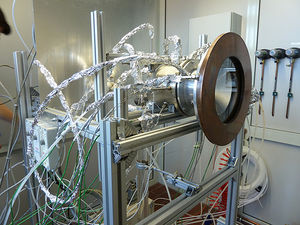 Solar reactor in the lab of Prof. Aldo Steinfeld und doctoral student Philipp Furler at ETHZ (Zurich, Switzerland). This lab has done a lot of work on areas such as solar thermochemistry and solar fuels. 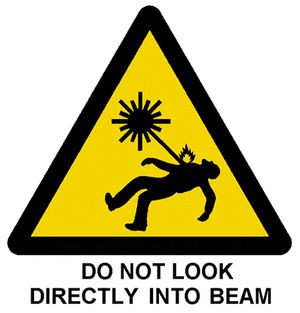