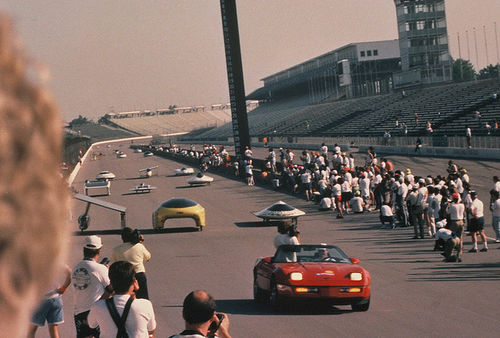 The Methanol Marathon (1988-1990) was an alternative fuels competition for college and university students in the U.S. and Canada. General Motors Corporation provided 1988 Chevrolet Corsicas which were converted to operate on an M85 fuel (85% methanol and 15% hydrocarbons).

Methanol, also known as methyl alcohol, wood alcohol, wood naphtha or wood spirits, is a chemical with the formula CH3OH (often abbreviated MeOH). It is the simplest alcohol, and is a light, volatile, colorless, flammable liquid with a distinctive odor very similar to, but slightly sweeter than, ethanol (drinking alcohol).[4] At room temperature, it is a polar liquid, and is used as an antifreeze, solvent, fuel, and as a denaturant for ethanol.

The best routes for making dimethylether (DME, a biodiesel equivalent fuel) are from methanol via transesterification reaction.