Pyrolysis Oil or "bio-oil" is a product of anaerobic ("destructive") distillation of biomass. Upon heating of wood or other biomass to sufficient temperature in an air-tight chamber, volatile components are produced. After cooling, some of these are gaseous (hydrogen, carbon monoxide) while others are in liquid form, the so-called pyrolysis oil. This oil is a dense fuel source - for applications such as heating and steam production. It may be burned by a burner such as the Babington burner. As such, this is a lower-tech substitute for petroleum fuels in some applications, with lower caloric value than diesel fuel. At present, it cannot be substituted for diesel in internal-combustion engines due to high viscosity and acidity. Upgrading of bio-oil to Diesel fuel via the Fischer-Tropsch process is possible but may not be practical. Recently, a cheap and open source way to upgrade bio-oil via Red Mud was discovered. 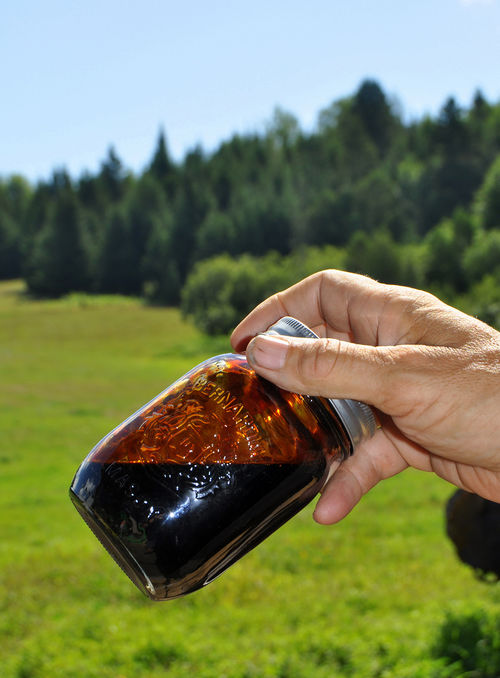 Bio-oil ("biocrude") straight from the farm.

Pyrolysis oil is most often derived from biomass pyrolysis, but a wide variety of other sources are also possible, such as waste plastic and old tires. Typical industrial applications of pyrolysis oil as a fuel:

A great experiment that can be done in a semester is the construction of a simple distillation apparatus to test the procedure with wood chips or newspaper - and to measure the purity and composition of the resulting fuel. Contact: joseph.dolittle at gmail dot com for more information 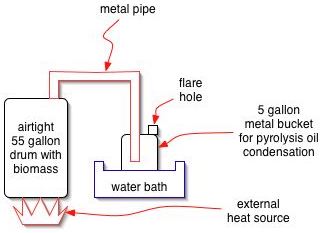 A basic experiment can be performed readily by heating biomass in a 55 gallon metal drum. An external fire may be applied, or an electric heating element may be installed. The vapors that come off can be sent into another drum, submerged in cool water for condensation to occur. A weep hole is put in the second drum for pressure release, and gases may be flared, or captured, at this outlet as the reaction proceeds. When all biomass is distilled, the flare gassing will stop.


The resulting product can then be analyzed. 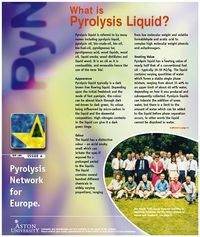 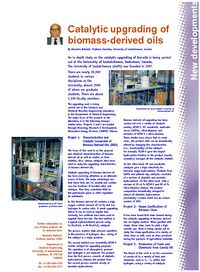 here's a pyrolysis machine as i understand it:

1. you need a furnace, probably an old barrel for the outside of the combustion chamber lined with with a fireclay/sand/sawdust mixture inside. It would have a lid with a moderate exaust port (maybe half the area of the lid is removed), which could be cast out of the same fireclay mixture. Also, there's an opening at the bottom for fuel and air. You could run it on natural gas, since eventually you'd probably just pipe the wood gas back into it in a later version.

2. a chamber for the to be pyrolyzed material to go into. might be able to surround a cheap chamber with a thin protective coating. thin so as not to impede heat transfer. refractory mortar and sand maybe, the mortar is maybe $20 for all you'd need i think. or you may need to use a large diameter pipe and make a bottom and top for it out of thick (5/8"-1/2" i guess) metal slabs. it has to be somewhat thick because it will oxidize through quickly otherwise (galvanization would evaporate; chromium or enamel would have to survive thermal expansion/contraction cycles; thin stainless may be an option) at the top there is a hole for outlet, there is no inlet hole.

3. a quencher. apparently the quickness of the quenching is important, as the free radicals produced are rapidly combining to form tar and asphault as opposed to more useful things. A common way of doing this is to spray a lot of cooled pyrolysis oil into the hot stream within a cyclone seperator (like your flour mill thing). I don't know how practical that is. perhaps cooling the walls of the cyclone seperator and the tubing up to it also with running water from your cold well would work. this woukld need experimentation.

4. gas storage. an oil drum filled with water, inverted and subersed in water. A large version of how they collect gas in chemistry class. bubble the gas in through the bottom and you've got a valve on the exposed surface to let the gas out at your leisure. weights on top of the barral determine the psi of the storage. eventually this gas might be just redirected back to the furnace, but at first its good to know how much gas you are getting, and also you could use it as cooking gas to displace your propane.

At first i say skip 3 and just let bubbling through the water in 4 be the quench. then you could weigh the char and the gas and know how much oil you are producing. most of the oil would probably be in a film at the bottom of the gas collection, but i dont know how the wetness would affect it (i think some fractions would polymerize with the water, or form a stable emulsion). Theoretically, this would be the best quench as far as surface area of gas to thermal sink goes, so you'd get an estimate of how much oil very effective quenching would produce. then, when you have system data on flow rates and all that you can build a cyclone seperator and play with some better quenching ideas.