Typical steam engine cylinders are made from cast iron. (What is the best metal to use for a steam engine?) Given that water is the working fluid, lubrication is required in the cylinder. (Is there any way to prevent corrosion otherwise?)

Cylinder - cylinder is made from cast iron.

To cast this cylinder from scrap iron, use a (how many?) pound melt, and use a simple melting furnace such as (here?)

The simplest way to cast a cylinder

jerryshaw: it may not be fully feasible yet, or maybe it already is, but high temperature plastics may actually be usable. Temperature and pressure is well below an internal combustion engine, and there are no plastic IC engines but we already have plastic intake manifolds right next to very hot components, say 400 degrees in the intake of some supercharged engines. If plastic works it would make for very inexpensive steam engines, as well as fairly light weight ones, making it easy to motorize things everywhere. They could be cheaply manufactured from a cooperative owned plant, or perhaps the plastic formulations could be tweaked over time to even eventually use bioplastic and be printed in your own RepRap machine! http://reprap.org/bin/view/Main/RepRap But until then don't entirely rule out plastic. It should at least work with basic steam, maybe not superheated steam. I have even heard of wood(!) being used to make a working steam engine (though I think it used iron piston rings, the piston and cylender and head were wood) although I wouldn't expect life to be terribly long.

I think an aluminum/silicon alloy would be worth considering. It does not shrink much as it solidifies, and can be cast at a reasonable temperature, using plaster molds (lost wax or, when scaled up, a re-usable polyurethane master). It's also fairly strong, reasonably corrosion-resistant, can be used to make heat exchangers, and is widely available as scrap, e.g. aluminum engine blocks are made from a suitable alloy. David Gingery wrote some books that might be helpful.

Nick R. says, what are the limits to lathe boring diameters in cast iron? This [1] method of construction looks simple and attractive if it could be scaled up enough?

Concrete could work well, as in Lathe

Several people have suggested conversions from:

An alternative engine design that may be worthy of further evaluation can be found [2] here. It looks as though o-rings are used in place of traditional tight tolerance cast iron cylinder boring. Presumably this method is only good for low pressure and temperature steam. The linkage and valve system is highly innovated and would require no precision machining.

Discussion of the Green steam engine:http://www.alternative-energy-news.info/green-steam-energy/ It does indeed seem that the o-ring method of sealing is incapable of handling high steam temps and pressures and the design is therefore inherently inefficient.

Marcin says: I looked at this in detail 2 years ago, and purchased plans. When I asked for references of people who built this engine, the inventor did not provide me with any. I became suspicious about the effectiveness of the engine. Since then, I've heard reports from several sources that longevity and performance are questionable. In summary, if this worked as stated, we would see a large number of implementations on the internet. Since these are not to be seen, it does not appear to be a promising design.

This is a schematic picture of the Innas Chiron free-piston diesel engine. Here the diesel piston, working in-line with a hydraulic cylinder, pumps fluid into a high-pressure accumulator for delivery to a hydraulic load.

Something similar should work as a steam Powercube, (perhaps simpler -- I don't see why there need to be two hydraulic circuits). 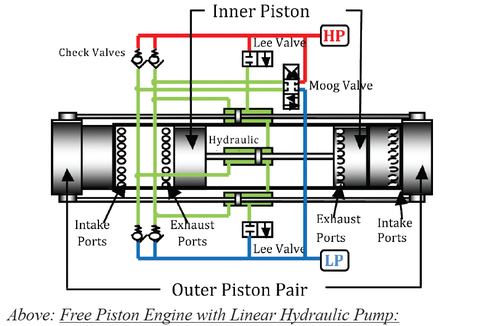 Suppose there is just a simple single-ended hydraulic piston. The solenoid valve connects the cylinder to either tank (suction) or pressure. Adjusting the timing controls energy extraction from the moving steam piston inertia at the end of the power stroke and giving it a shove back towards the top end. A second solenoid valve could control a small hydraulically-operated poppet valve to admit steam (with variable cutoff timing).