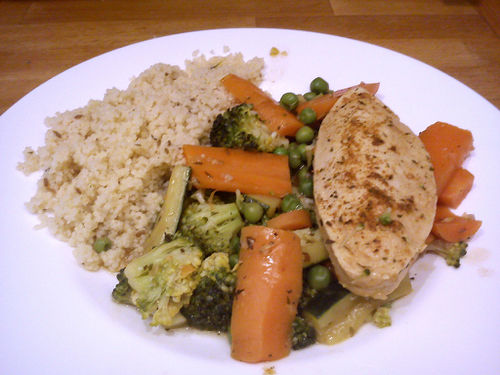 The concept known as “single cell protein” refers to the production of dietary protein using microbial organisms. These could be bacterial or fungal organisms that metabolize various chemicals, such as multi-carbon compounds, but also methanol, methane and even hydrogen. One of the well-researched organisms in this field is Methylophilus methylotrophus which utilizes methanol. “Pruteen” synfood failed in the 1980's because of the high cost of natural gas at that time. Would it work now (2016) with today's lower gas prices?

While this concept is called "single cell protein", it is not limited to the production of proteins but can include any food component such as carbohydrates and fats. This needs to be re-branded with a better name - perhaps “synfood”, analogous to “synfuel”.

1.) Methanol, ammonia and other nutrients are mixed together

2.) Steam sterilization of this mixture

3.) Mixture is put into a fermenter that is at 40°C and kept under high pressure (to keep ammonia dissolved) using pressurized air

4.) Some substrate is constantly removed from the fermenter, acidified and heated (result: cells separate out)

5.) The leftover fluid is recovered, steam sterilized and added back

This is old technology (see Wikipedia entry for more information). However, it is a very broad field and parts of it may be covered by patents.

This field has failed to take off in the past but could have major impact on food production, especially meat production. It has the potential to dramatically reduce the demand for pasture land in particular, and for other agricultural land as well. Syngas from biomass could be turned into food. Genetic modification of these microbes can further optimize yield.