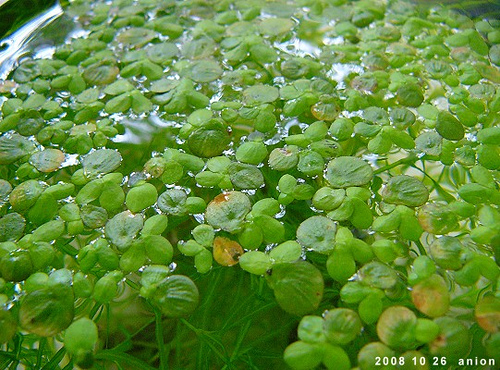 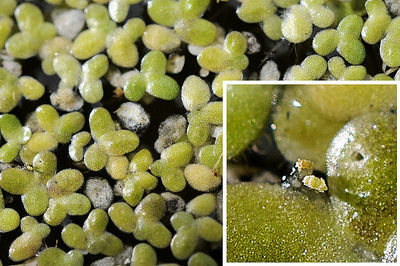 Duckweed (lemnaceae, water lentils) family are the smallest flowering plants and probably the fastest growing plant, capable of doubling its weight in 24 hours. Because of the very high productivity per surface area, duckweed holds great potential for future global villages. This tiny aquatic plant has tremendous potential for cleaning up pollution, combating global warming and feeding the world.

Duckweed grows well on wastewater that is rich in nutrients. For reasons that seem to be still poorly understood, biological contamination appears to be beneficial to duckweed growth. It therefore grows well on water contaminated with cattle dung, pig waste, human urine, biogas plant slurry, compost or other organic matter in slurry form. Other potentially good sources may be effluent from aquaponics, used hydroponic solution, leachate from silage, perhaps compost tea or other kinds of organic nutrients. The plant likes still water and wind breaks, such as trees.

Duckweed integrates very well into aquaponics - that has been called "duckweed-ponics". 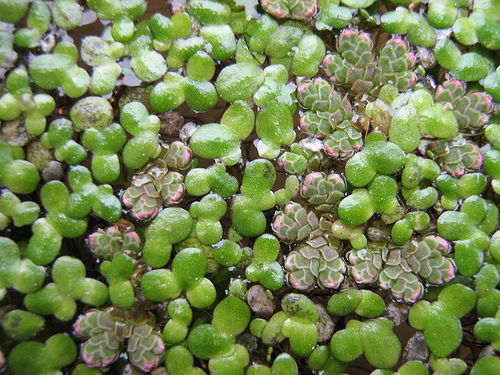 An example of co-culture of Azolla and duckweed: "Azolla filiculoides and L.minor" by Mygaia at English Wikipedia (T.M.McKenzie)

According to research from the Tropical Ecological Farm, College of Agriculture and Forestry in Ho Chi Minh City:

"It is unique amongst plants in that its protein content can be manipulated according the nitrogen content of the water in which it is growing. This is important because it integrates with the biodigester. It is the ideal water plant to introduce into an integrated farming system because it can use the nitrogen in the effluent coming from the biodigester to enrich its protein content to a level only slightly lower than Soya Bean, approaching 35%. In terms of protein production, grown under ideal conditions in can produce 10 tonnes of protein per hectare per year. This compares with Soya bean which produces less than 1 tonne per year."

Depending on strain and growing conditions, duckweeds can have very high protein content of up to 50% of dry mass. High levels of vitamins are also present. The taste is remotely similar to spinach. Duckweeds have historically played a role in some east Asian cuisines (Wolffia genus). Because of rapid growth and ease of cultivation, duckweeds for consumption by animals and humans are now getting more attention.

Animal food: food for ducks of course. Also chickens, fish (tilapia), goats, horses, cattle, pigs. It can provide all the protein needs for some breeds.

Human food: Duckweed can be eaten in salads or soups, on a sandwich or as a component of vegetable spread (or as a substitute for: lettuce, spinach, water cress, alfalfa, ... ?). If grown for human consumption, make sure that there is no bacterial contamination. The dense covering of duckweed at the water surface can block out sunlight, which may allow anaerobic bacteria to grow. After harvest, duckweed can be lacto-fermented (see: Fermentation or Wikipedia: "Lactic acid fermentation"), which would eliminate most potential pathogens (also see: silage).

Lentein: A commercial product of duckweed powder called "Lentein" has been introduced by Parabel. From the website: "LENTEIN protein powder has been successfully blended in dry-mix goods like chips, crackers, snack mixes, bars, and cereal clusters. It also blends well into protein powders used for sports drinks or meal replacement shakes."

Duckweed ethanol: Duckweed can produce appreciable quantities of starch that can be readily fermented into ethanol. The total starch content of duckweed can vary from 3-75% of the dry weight depending on strain and species. Other factors like nutrients and concentration play a large role in the accumulation of starch in duckweed. Some species like Spirodela polyrrhiza combined with swine wastewater can contain a starch content of up to 46%. Duckweed has great potential for the development of environmentally friendly, economically viable ethanol production.

Biogas:: closed-loop system: use effluent from digester to grow duckweed, then use duckweed in biogas digester.

Gasification:: dried feedstock can be burned or gasified. Ash can be recycled as fertilizer on the duckweed pond.

Hydrothermal liquefaction for conversion to a crude-oil like liquid. 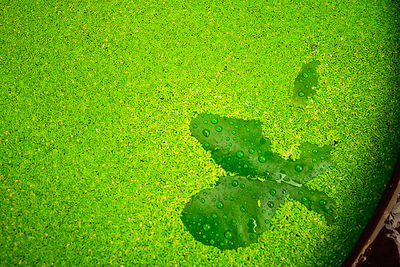 Bio-sensors: Duckweeds are used for the detection of heavy metals and organic contaminants.

Biomining: of phosphorus and other minerals/nutrients from wastewater.

Ensiling duckweed may result in very high quality fodder, but appears to require add-ons such as molasses or sugar beet pulp (see source). Pressing duckweed does not reduce the water content significantly, therefore some drying may be required in order to reduce the weight and improve transportability (consider Food Drying with Superheated Steam).

A possible recipe (not tested yet!) for a high-quality duckweed silage product could include:

3. some sort of sugar to fed the bacteria (e.g. molasses)

4. a small % amount of biochar as a microbial stabilizer

Tamra Fakhoorian who runs the excellent blog "Duckweed Gardening" has pioneered the commercialization of duckweed (see her company: GreenSun Products, LLC). Also check out the video below.