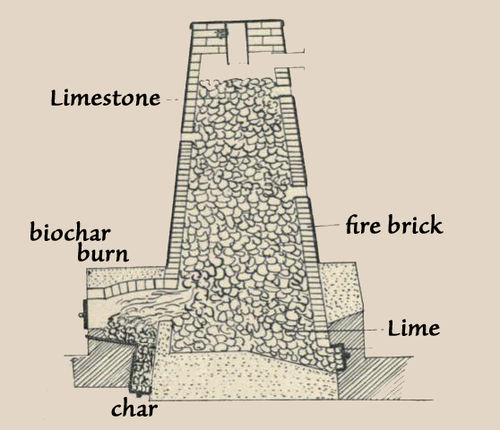 Model of (continuous) biochar/lime co-production system. Limestone is added at the top. Wood or other biomass is charred at the bottom. The combustion of pyrolysis gas ("wood gas") from biochar production provides the heat that turns limestone into quicklime.

Idea to couple the production of biochar with lime burning. The pyrolysis gas generated during char production is not flared off but used to make quicklime, which has many uses in construction and other areas. The process is carbon-negative. This type of production needs relatively close ('round the clock) monitoring but there is potential for automation.

The concept depicted on the right is also known as a Rumford furnace which was fueled by coal (or charcoal). Our modification is that the input is uncharred biomass such as wood, and that it not completely burned to ash but is only charred (pyrolyzed) into biochar. The system has flexibility though, and if ash instead of char is the desired product (e.g. for lye production or other purposes, that that can be done as well.

This seems much less technical challenging than biochar/brick co-production. Again, this is a 24/7 operation. The use of pyrolysis gas has been demonstrated for lime burning. 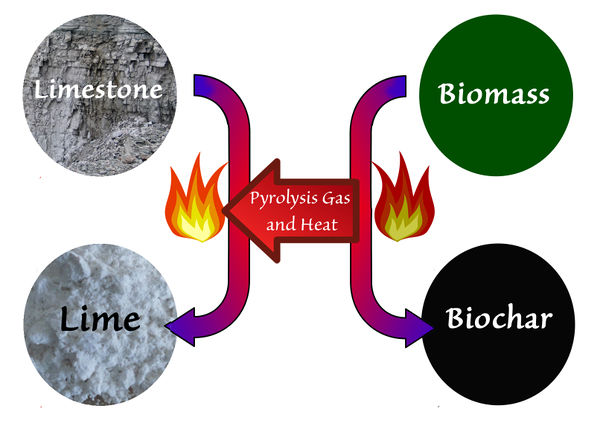 Concept: combination of lime burning and biochar production. Pyrolysis gases from biochar production are captured and burned in the kiln, turning limestone into quicklime.
Retrieved from "https://wiki.opensourceecology.org/index.php?title=Biochar-Lime_Co-production_System&oldid=143255"
Categories: