The concept is to couple the production of biochar with the production of fired bricks, analogous to the Biochar-Lime Co-production System. The pyrolysis gas generated during biochar production is not flared off but used to fire bricks in a Vertical Shaft Brick Kiln (VSBK). The process is carbon-negative, because part of the carbon (25-30%) is retained as recalcitrant biochar. 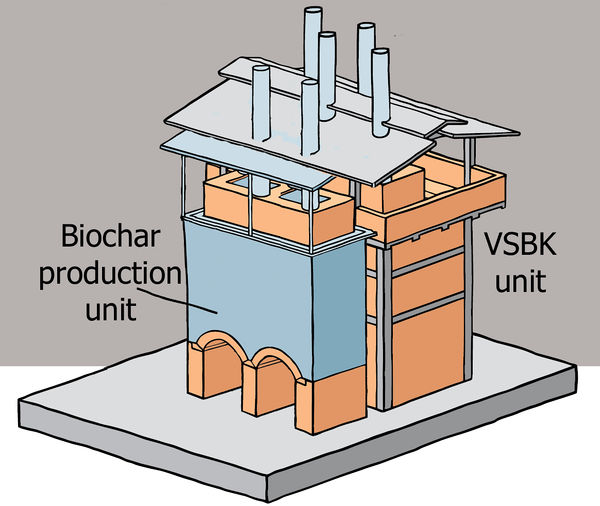 Biochar/Brick Co-Production System: suitable dry biomass is added at the top of the biochar production unit, moves down the shaft and is pyrolyzed into biochar, which is removed at the bottom. The pyrolysis gases exit through the back of this unit (connection not shown) and enter the VSBK shaft where they are burned to fire the bricks.

Additional early sketches. Air entering the biochar-making unit should be very limited, in order to prevent full combustion. It is only needed to maintain a sufficiently high temperature of about 450-550°C. Most air enters through the VSBK unit. Exhaust heat from the VSBK may be used to pre-heat the biomass. Alternatively, it could be used to pre-heat the air entering the VSBK. Image on the right side is view from the top.

Some reports suggest that high-quality biochar requires low reaction pressures, to allow all volatiles to evaporate and leave only the char behind. The simplest way to achieve this is the "open burn" approach as demonstrated by the Kon-Tiki Kiln. Now if the pyrolysis gas is captured, this may result in higher pressures inside the pyrolysis zone, potentially reducing the evaporation of volatiles. Possible solutions are: 1.) build higher smokestack to increase draft, 2.) forced draft system using electrical fans that pull out the exhaust, or 3.) blow CO2-rich exhaust gases into the pyrolysis zone to limit oxygen but still drive out the volatiles.

There is a potential design conflict here in that the draft on the system has to accommodate both the brick firing and the pyrolysis. This may make this whole concept not feasible. If the draft on the char is very high, then a larger percentage of the biomass will burn to ash (and the temperature may be above the optimal 450-550°C range). If the draft is too low, then the temperature may be too low for good-quality biochar and also the amount of residual volatiles may be elevated. For the bricks, if the draft on them is too high or too low, quality will be affected. This can potentially be resolved in different ways. A throttle mechanism could be inserted between char and bricks. Also, an extra chimney could be added that is only for the char, to make sure that there is always enough draft. This would waste some fuel and heat but it could perhaps be captured for other purposes (e.g. steam production). Also, as mentioned in the previous paragraph, CO2-rich exhaust could be blown into the char which would have the advantage that it would pre-heat the newly added biomass. So this may be fixable but at the cost of having a more convoluted system.

An entirely different approach would be to have an open, complete burn as in the Kon-Tiki Kiln but only use it to add heat to the system, not fuel. There would still have to be some fuel added to the brick shaft but perhaps at a somewhat (greatly?) reduced level. The air entering the VSBK from below would be pre-heated (heat exchanger?) before entering the burn zone.

Yet another approach would be to make the char in a separate facility and capture the pyrolysis gas (wood gas), condense it down to pyrolysis oil and then use that to co-fire a standard, unmodified VSBK.