Polyethylene (PE) is a polymer of long chains derived from the monomer ethylene (IUPAC name "ethene"). It is one of the world’s most common plastics, with a wide range of uses and over 60 million tons produced worldwide every year. Several different categories exist, based on density and branching. Common types are high-density PE (HDPE; plastic # 2) and low-density PE (LDPE; plastic # 4). Polyethylene is not biodegradable, therefore significant environmental issues are associated with its use. Recycling of PE is relatively straightforward. When disposables are involved, every effort should be made to replace PE with biodegradable alternatives. However, resistance to biodegradation can also be a desired effect for some applications. For example, geomembranes are often made of HDPE and are widely used as liners for fish ponds, constructed wetlands and biogas digesters. Its resistance to degradation also warrants its use in the natural gas industry in transporting natural gas underground in high density PE pipes. Excellent chemical resistance of PE allows for widespread use in storage applications. PE is also useful as a material for digital fabrication. It can be used in the RepRap 3D printer.

Ethene is a very simple two-carbon organic molecule (C2H4) that does not have to be derived from petroleum. In fact, it can easily be produced from ethanol in a dehydration reaction. This has been known for many decades, but was not cost-competitive at low oil prices. Recently, a Brazilan-Japanese joint venture announced the "Green Polyethylene Project", with sugarcane as the feedstock. Commercial-scale introduction of this "BIO-polyethylene" is planned for 2011. We welcome PE to the club of bioplastics and believe that small-scale production from ethanol can be made practical.

Dehydration of ethanol seems fairly simple to do with an aluminum oxide catalyst. This method is well suited to small batches and could be easily scaled up to larger batch sizes. It sounds fairly easy to test out. They don't mention the required temperature but it has to be lower than the ignition point of ethanol(~362°C). If we want food-independent ethylene production, especially for larger scale use, we could go from carbon dioxide and water to syngas (a mixture of carbon monoxide and hydrogen) and then finally to ethylene [1]. This [2] may be useful for producing the syngas.using a fluid bed reactor or recently in a microreactor. The production of a distillation chamber capable of lowering pressure may also benefit the aluminum refining process. Aluminum is a favored catalyst for ethanol dehydration to ethylene but additional compounds such as transition metals increase yield and selectivity while other zeolite catalysts have also been described (Chen et al.).

Polymerization of ethylene is an exothermic reaction with multiple generations of catalysts. Phosphoric acid is the earliest catalyst under high pressure and temperature. Zeolite initially of silicates and then other matrices made the second generation of catalysts and still operated under elevated pressures and temperature. The third and currently evolving class of catalysts are known as Ziegler-Natta catalyst use an activator molecule of the (Al)C2H5n organoaluminum cocatalyst or methylaluminoxane and a titanium catalyst (TiCl3 or TiCl4 etc).

There are a number of steps involved in polyethylene production from a biotic feedstock; selection of a feedstock, construction of open source fermentors, purification equipment, and fluid bed reactors, along with methods of measuring yield and quality of each step will be require bringing a diverse background of knowledge together.

Almost all PE today is derived from petroleum. In a very energy-intensive process, a petroleum feedstock is cracked at high temperatures. After distillation and purification in large, capital-intensive facilities, ethylene is produced. This is then polymerized to polyethylene, a process that again involves high temperatures, high pressures and often toxic organic solvents. Clearly not an ideal situation.

An OSE project to replace this process with a constructive route from organic feedstocks rather than degradative oil based processes is currently in the research and development phase. The process is being developed Extreme Manufacturing system and according to OSE guidelines. A literature review on Polyethylene from Ethanol/Research Development details the major steps of the process, technologies employed, and applicable details to an OSE standard. Scrum project management will be a used if a team comes together or an individual wants to take on a project.

A thorough review of the process of creating polyethylene from ethanol is underway on Polyethylene from Ethanol/Research Development. Catalysts for the two-step process have been reviewed and an OSE protocol derived. Assistance is needed summarize unreviewed literature and provide summaries of important information. An examination of the processes full product (substrate and catalysts) ecology is needed and proposals for import replacements for petroleum derived substrates investigated and proposed. A thorough review of the operation of an FBR applied to the proposal is needed.

Current blockages to further development include review by a subject matter expert to evaluate and critique the current proposal. Help from interested parties with technical review and people is needed to work on substrate production and purification, and sourcing information for catalysts. Expertise in fluid mechanics is needed for the reactor design. Graphic design or CAD of the system would be a big benefit to many aspects of the proposal. Development work for applications, specifically greenhouse coverings is needed. 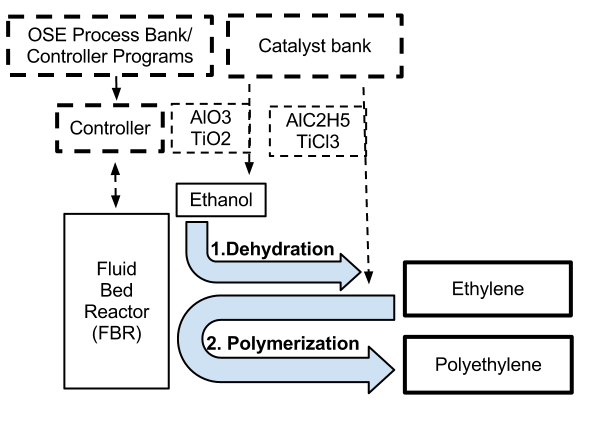 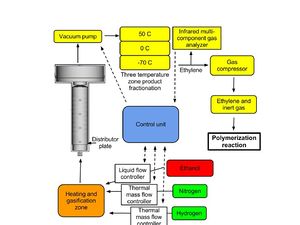 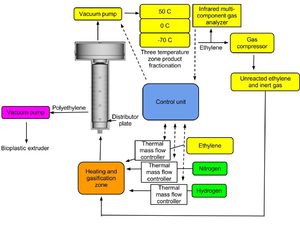 The design rationale for the OSE agroecological approach is based upon OSE standards. The process design is meant to produce a needed product ecology using local feedstocks. By starting with high purity substrate and selective catalysts purification steps can be minimized and the process conducted on a small scale. A fluid bed reactor is a key piece of hardware that is used by the industry due to its superior performance. An OSE reactor is designed to be reconfigurable to a number of processes and be of appropriate scale.

Producing polyethylene from locally produced base materials and open source hardware will require the production of high purity molecules and machines capable of conversion at high efficiency and selectivity. The project can be broken down based on producing high quality substrates: ethanol, ethylene, and polyethylene. The tasks need to be further divided into catalyst selection, hardware components, and substrate requirements to be worked on separately as part of the scrum process. Dehydration of ethanol to ethylene, will be the first goal of the project as it has the largest value margin between substrate and product and the catalyst requirements are within the scope of OSE's currently proposed product ecology.

Starting with commodity ethanol will allow OSE to apply itself to an area where the open source information and demonstration is lacking. Reactor and catalysts are selected based upon demonstrated and easily available chemicals and could open a new sector to open source entrepnuers. Demonstration of a few base applications thermomolding and greenhouse glazing will allow incremental development. Production of feedstock will be conducted as part of an integrated plant at FeF and fermentation and purification technology built to utilize it.

Tools including catalysts and process control should be developed to be multipurpose and modular. Development of multiple uses at once will maintain that focus. The aluminosilicate chemistry learned from this process may allow other products.

1. Dehydration of ethanol using a catalyst and fluid bed reactor.
A. Selecting a catalyst. AlO3 can be utilized as an initial catalyst after production by the aluminium extractor. A base wash with KOH or NaOH can be used to increase the specificity of catalyst. Improvements to the catalyst can be incrementally made as OSE technology becomes available. The current proposal calls for a AlO3 doped with TiO2, a demonstrated highly efficient and selective catalyst.
B. Constructing a reactor chamber capable of mixing the catalyst and substrates under optimal conditions. The reactor chamber must allow control over temperature, pressure, addition and removal of catalyst, control of feedrate and interaction time of substrate, and separation of production and should incorporate features that allow easy reconfiguration and recycling of catalysts, solvents, and unconverted substrate.
C. A three phase temperature (50, 0, -70 °C) fractionation condenser will be used to remove byproducts, unreacted substrate, and inert gas, producing high purity ethylene suitable for polymerization.
D. Methods for measurement of ethylene yield and purity must be further investigated (maybe using spectroscopic methods).

2. Polymerization of polyethylene from ethylene using Ziegler-Natta catalyst and fluid bed reactor.
A. Selection of a components of catalyst for polymerization: triethylalumina, Ti/Mg Cl, electron donating solvent.
B. Optimal configuration of reactor for polyethylene polymerization.
C. Measurement of PE yield and purity.
D. Ability to pass newly formed polyethylene to an extruder or storing as pellets for future extrusion.
E. Investigate production of other polymers such as polyethylene vinyl acetate (for greenhouse materials).

3. Extrusion to final product
A. Identify most desirable products for OSE product ecology and research optimal extrusion processes. Materials for greenhouses or windows are a high priority as mentioned by Marcin and this application could be the first aim. Identify ways to maximize translucence, increase UV resistance and filtering, and maximize material use with strength and durability (film versus panels).
B. Value adding processes such as tensile polymer incorporation or shaping into useful products.

4. Production of ethanol on-site from sorghum utilizing yeast fermentation.
A. Selection of yeast and/or bacterial strains that are optimal for sorghum fermentation and finding their optimal conditions.
B. Construction of fermentation equipment.
C. Construction of distillation equipment capable of operating under vacuum, which could possibly be attached to fermentation chamber.
D. Method for measuring alcohol purity. Measuring specific gravity is means of getting a rough estimating ethanol yield and with internal improvements can achieve higher accuracy. Measurements against as internal standard and a pure ethanol standard can improve hydrometers accuracy.

Conformity to OSE specifications and eventual use of entirely locally produced components.

Ability to produce high and low density polymers for use in thermomolding in injection, die, and blow molding.

Both ethanol and ethene are flammable, so be careful to ensure against vapor ignition. Initial runs should be done in small batch sizes to ensure greater safety. Ethanol is toxic to the liver but poisoning symptoms should be obvious. Ethylene gas is highly flammable and should be kept away from any source of sparks or static electricity. Technicians running this process should wear a lab coat, eye protection and gloves. A thermal and impact jacket will be a modular piece of the reactor design. A secondary firebrick jacket will be used for this application and can incorporate venting to prevent buildup of dangerous gases.