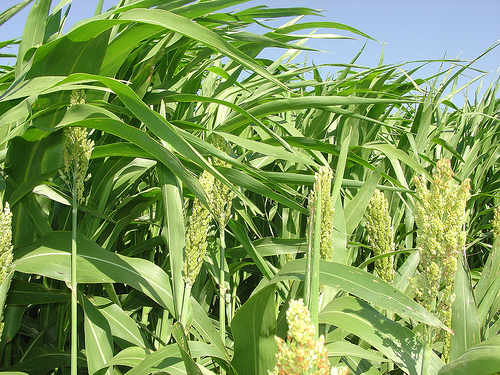 Forage sorghum trials - can be a good source of bioethanol

Ethanol, also called ethyl alcohol, pure alcohol, grain alcohol, or drinking alcohol, is a volatile, flammable, colorless liquid. It is a psychoactive drug and one of the oldest used. Best known as the type of alcohol found in alcoholic beverages, it is also used as a fuel, as a solvent, or in thermometers. In common usage, it is often referred to simply as alcohol or spirits.

Ethanol is organically produced by fermentation in a variety of microorganisms including yeasts and bacteria. Ethanol fermentation is an art that has been employed for thousands of years and is of significant commercial and recreational value. Commodity ethanol is valued according to its purity while consumption ethanol is valued by creating a palatable beverage and their production processes have these emphasis. Fermentation requires a carbohydrate rich feedstock, a fermentative microorganism, and a chamber to protect from contamination and control conditions. The art of fermentation has been developed over thousands of years but high efficiency microorganisms and hardware to maintain them must be developed as part of the OSE toolkit.

Carbohydrate rich plants containing either simple sugars or starch are ideal fermentation material. Saccharomyces prefers glucose but can also use other disaccharides and simple sugars. Sugar cane is the commercially preferred feed stock for the production of ethanol for ethylene production and other industrial uses and has an efficiency 4 times that of corn.

Selection of a microorganisms is based on several factors but most importantly compatibility with the feedstock, high product yield, and growth and resilience. The yeast Saccharomyces cerevisiae (brewers yeast) is the most widely used ethanol fermenting microorganism. The bacterium Zymomonu mobilis is also used in its own or with yeast. It produces ethanol by the Entner–Doudoroff pathway near the theoretical limit and is under biotechnology study.

An OSE fermentor is currently in research and development for production of ethanol, lactic and acetic acid. A fermentor must be able to maintain anaerobic conditions for ethanol fermentation and optimally to allow the removal of product and addition of substrates.

A fermentation chamber is a sealed compartment that holds the microorganisms and feedstock in a controlled environment. A fermentation chamber capable of producing high quality products will require control of temperature, aeration and anaerobic conditions, media mixing, and input of feedstock, microorganisms and other growth factors and removal of product rich media. Carboys in temperature controlled chambers are used by hobbyists while industrial chambers are usually of a conical design with built in condition controls. Sterilization is extremely important for maintaining pure and active cultures and steam provides an effective method that is compatible with OSE technology. Building equipment capable of being steamed along with aseptic technique should protect the fermentation mix from contamination. Fermentation for consumable alcohol is conducted in a batch wise process to make a complex mix that is ethanol rich. Continuous run processes offer several advantages when fermenting for product yield by removing ethanol and other waste products that are inhibitory to the microorganisms.

Ethanol is purified via distillation to either high purity for industrial use or a liquor spirits. Distillation equipment is well understood for purification of the (95%:5%) ethanol:water azeotrope and multiple online resources discuss their open construction. However for OSE's purposes higher purity (99%+) ethanol must eventually be rendered. Drying agents and vacuum distillation are two methods OSE should investigate to these ends.

a. Ethanol can be purified via distillation and has a boiling point of 78.1 C, however the product is azetropic and may not be suitable for all application. Several methods exist and are detailed on wikipedia. Yield of ethanol can be measured via spectroscopic methods with wavelength 2300 cm-1. http://plasticstill.com/how-it-works/ http://www.erowid.org/archive/rhodium/chemistry/equipment/distillation4dummies.html http://www.umsl.edu/~orglab/documents/distillation/dist.htm http://www.artisan-distiller.net/phpBB3/viewtopic.php?f=1&t=4239&start=15 http://en.wikipedia.org/wiki/Rotary_evaporator http://www.nariphaltan.org/solarstill.pdf

US patent 4,399,000 issued to Tedder on August 16, 1983 details a method to extract alcohols from its water component using an organic solvent to form a lowhead aqueous phase and a high head alcohol-solvent phase. The patent details a device for mixing an extractant with an organic solvent and passage of the solvent-alcohol phase to a vacuum distiller that separates the highly pure alcohol from the solvent. Solvents for use include aryl or alkyl phosphates, a phosphonate, a phosphine oxide, a sulfoxide, a sulfone, an amine oxide or a quarternary ammonium or a phosphonium salt in a ratio of 1 to 10 parts by weight solvent to 1 unit alcohol.

Usage as a Fuel