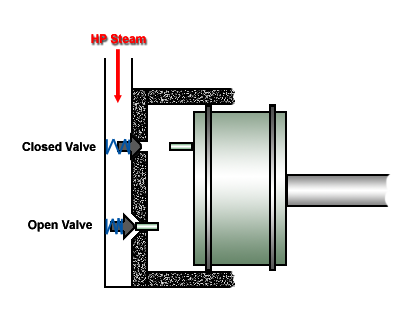 This valve design features the "chinese hat" profile mentioned in the SACA discussions below. It would be turned from high carbon steel and tempered to harden it It has a slightly flattened point where the bump pin hits it. This distributes contact and should improve wear. Seating of the valve is important or steam will leak into the cylinder chamber. 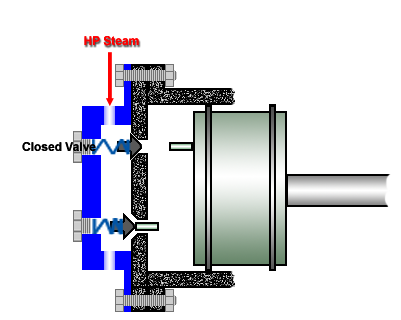 An improvement over the last bump valve design by having a valve enclosure that seats the valve springs and brings in steam from the top. Stem input port would be threaded to receive a standard dia (1/2" ?) cast iron nipple. Valve enclose now bolts through the cylinder end cap to a flange on the cylinder. We may need seals between these pieces, perhaps cut from a soft metal like copper. 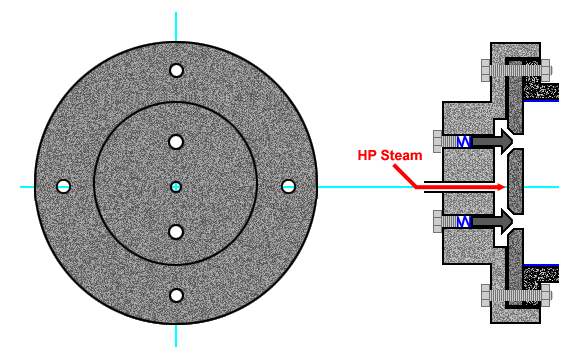 The steam inlet has been reduced in space in this design, allowing for a longer valve spring hole. With the springs fully enclosed in the holes, it is hoped to that the springs will not anneal from steam heat, or at the very least, extend their useful lifetime. Also included is an end view. The valve cover can be turned on a lathe and holes drilled out. No milling is needed.

The ball has to be harder than the seat other wise the seat will line the ball and it will leak in short time. Steam is a whole new world. soft 304SS seat ,hard ball 440c SS 58r ball , ceramic ball, best. Anything will run on air.

Any idea how many hours you could expect from such a valve?

Depends on how many times it opens per hour, the pressure , the hole diameter in relation to the ball diameter, the temperature and the water quality ,they all add up . We did a lot of testing on valves it is a lot of work and time testing takes time.

The valve (ball?) and seat seem to be pretty straightforward issues--but the pin (or rod) and its mounting on the piston seem to be a source of endless problems. The load concentrations in these components is obvious. Personally, I think the Williams type of impulse valve is a superior solution to the ball and pin type.

I do not know about the White Cliffs' project, but the two best bash valve work was done by Jay Carter and the Mobile Steam Society. Jay showed me two handfuls of experiments that were bent and bruised. He ended up with a Chinese hat shaped thing that had light weight, sealing on a flat surface, self centering, and a lot of area around the edge so he only needed 50 thousandths lift. The MSS went with an upside down mushroom shaped thing so that the bash impact was nowhere near the seating area, that was part of a spherical shape. The trick is to not use a ball bearing or any spherical shape because then the bashing impact will flatten a part of it, unless it is ceramic. These days the smart money is using recompression pressure to lift the bash valve and so then there is no metal touching metal. Tom Kimmel

The people who like bash valves, meaning Jay Carter, do the following analysis: they get about 5% cutoff and thus a 25 - 1 expansion ratio. They get approximately the rpm and torque of a conventional gasoline engine and thus the usual drive train will work. There are some interesting benefits to high speed, and Jay was getting 5,000 rpm, which is difficult to get with any other valve system. The benefits had to do with time. When high temperature, high pressure steam is admitted, you want a very short dwell time for the temperature to convect and the pressure to leak. Therefore there are some very good benefits to having a high speed steam engine. Few other people have explored this aspect of steam. In other words, the bash valve is a proven system, it is just an emotional issue. Tom Kimmel

For vehicles having a wheel diameter between 24 & 25 inches and fixed gear drive ratio between 2.0 and 2.5 to one (1), you can expect a state of the art bump valve to fail within 40 million cycles. However, if you get out of the "box" and incorporate some of the new ideas, you can expect that a failure may occur after 360 million cycles. This is my best guess based on observations combined with analysis.

The person who has the most experience with bash valves is Jay Carter. I have visited him several times in Wichita Falls and seen his shop and handfuls and coffee cans full of mis-shapen and broken clumps of metal, all tested experiments. Jay does not use the computer, he makes things. Therefore do not expect him to weigh in on this discussion as he is probably unaware of it and could not join if he wanted to. His final design, which Jerry Peoples says went 10,000 miles and I believe him, was a Chinese hat with 50 thousandths lift and a spring to push it down and prevent float. It worked up to 5,000 rpm because, first of all, there was a large, possibly close to one inch diameter, valve. The steam came in from the periphery and so there was a lot of area for the steam to move through. This is why a spherical ball is the wrong geometry; it is heavy and has a small cross-section and the square-cube rule starts to get you when you make it larger. Then, Jay used up to 2,000 psi steam. I have no idea how much wire drawing his system suffered from, but at least the steam got into the cylinder. A person might look at the cost, in energy, to make high pressure steam, and it is probably not much, just a little more power to drive the water pump, so one might as well start out with some high pressure steam. It is my opinion that Jay concluded that a bash valve was the only way to get a 25-1 expansion ratio and high rpm speed as any other valve train had too much inertia in it. One should always keep in mind when running a bash valve that clearance volume needs to be carefully considered. There needs to be some or there is no steam flow. Therefore all of the talk at the steam meets about small clearance volume and Jerry Peoples' calculations on the deleterious effects of high clearance volume do not apply to bash valves. Try to not get me started on all of the attempts to make a variable cut-off bash valve or about Bill Cartland's bash valve exhaust valve. Tom Kimmel

As the piston moves from bottom dead center (BDC) to top dead center (TDC) it compresses the air trapped between the top of the exhaust port openings and the top of the cylinder. This compression increases the pressure of this trapped gas as the piston moves up. In order to find the pressure at TDC we can use the ratio of the starting and ending volume and the adiabatic compression equation.

The third possible remedy is to locate the exhaust valve farther up the cylinder allowing some of the trapped air to be exhausted as the piston move toward TDC. This does lower the backpressure induced from this unwanted compression, however it also allows steam to escape before it can be fully decompressed. Using very small exhaust port holes (and very many of them to make up for the lost diameter) may hinder the high pressure steam more effectively than low pressure steam and make this a possibility, but numerical simulations show that designs using this mitigation strategy only work properly over a small range of engine RPM. Variations in engine speed change the amount of time spent at different pressures allowing more or less exhaust potential, throwing off the carefully reached balance between high pressure drag and low pressure escape. All in all, locating the exhaust valves higher to alleviate unwanted compression seems to be a net loss as a mitigation strategy.

The final possibility is to locate the exhaust ports at the very top of the cylinder but provide a way to mechanically open/close them, rather than relying on the piston moving past them to open them. This alleviates the pre-compression problem completely, without disturbing the decompression stroke, but it comes at the cost of increased complexity. Some other valve control mechanism would be needed to control the exhaust valve (be it a slide valve, cam and push-rod valve, electronic valve, etc). If another valve control mechanism is introduced to the design, than in many cases it makes sense to also use that same control mechanism for the intake valves as well bypassing the bump valve design altogether.

Therefore given the potential mitigation strategies to mitigate the unwanted pre-compression of the working space there are only two real options available: go with a pure bump valve design with simple exhaust vents at BDC and just limit the expansion ratio, or throw out the bump valve idea entirely and go with controlled intake and exhaust valves which are actuated by some other control system. Either of these strategies could be pursued to make a working engine, but the upper limit on the expansion ratio places an upper limit on the efficiency of a bump valve based engine. The lower engine efficiency could be offset somewhat by the fact that the resulting exhaust steam will be hotter thereby allowing it to do more of some secondary use, but as for raw engine output it must be considered a loss.

Because the bump valve is actuated by the piston itself, the timing of the open/close points must exhibit mirror symmetry around TDC. Adjusting the length of the bump pins on the piston will therefore open the valve earlier and close it later, no gain can be made in the dwell time on one side without the corresponding increase in the other. However, although the valve position must be symmetric about TDC, the flow of incoming steam through the valve is highly asymmetric. The asymmetry arises due to the difference in pressure about the point of TDC. On the compression stroke, the cylinder pressure is lower than the steam pressure and this large pressure difference results in a high flow rate. As the pressure drops the flow rate decreases, meaning that there will always be a larger volume steam admitted during just before TDC, than just after it; no amount of tweaking to the valve dimensions or bump pin length can remove this asymmetry.

Unlike the pre-compression losses described above which lower the rate at which the engine does work but do not do net negative work, the asymmetry in the steam admittance does produce a real loss of net work since the increased pressure on the compression stroke is not met by a corresponding increase on the decompression stroke.

This loss of efficiency is more pronounced at lower engine RPM since more of the steam flow will occur before TDC. At even slower speeds the piston will completely fill to operating pressure before TDC, and then continue to move closer to TDC forcing input steam backwards into the steam chest, and then re-draw this steam through the valves after TDC; thus introducing not only the steam asymmetry losses but also additional wire drawing losses. Furthermore, on engines with long bump pins this spike in backpressure to the steam chest could even introduce additional stresses on the machine leading to earlier metal fatigue and potential failure.