there are some edits i was wanting to make to this page, is there a reason that it is locked? How are we to do a wiki redesign and categorization if pages are blocked?

We can use talk pages to suggest changes. Some pages are more sensitive than others. There may have been some vandalising. You might be a vandal 'cos you don't sign. ;-) LucasG 03:16, 29 October 2008 (PDT)

Some links to literature about the manufacture and use of CEB

there is a line about hydraulic pressure, says 2000psi. should it be more like 545psi?

Has testing been done on a variety of soils? Would it work with desert sand? Are there tests someone could do with the machine to see what the specifications are for the CEBs produced using the soils on their specific lot? I'm trying to help with documentation. --Howard V. Agnew 01:09, 18 September 2011 (CEST)

i think the soil used has to have some percentage of clay content, so i think sand doesnt work, but i think maybe it could be added to a soil mix as filler maybe? im not sure on that. ose hasnt done much soil/brick testing but i think other people have done some, but not produced with an ose machine. --Dorkmo 01:17, 18 September 2011 (CEST)

Soil composition will definitely impact the quality of bricks produced. A mix of clay and sand is likely to produce the best results, though what the exact ratio is I do not know. CEB bricks are similar to adobe and cob, so I would expect the components to be pretty much the same. Mjn 02:59, 18 September 2011 (CEST)

I think research into the strengths of various soil compositions would be helpful information to include in the documentation. The "Aha! Tools I can download the instruction to, make some bricks to build something with the dirt in my own yard!" sounds nifty, but if there are particular soils it won't work so well with, I think that's useful information to note. --Howard V. Agnew 04:10, 18 September 2011 (CEST)

Manufacturing instructions and google sketchup models for the CEB press are being updated (this is direly needed, as they aren't consistent with each other and the specs are not current to the current builds). This corresponds with my (Howard Agnew) effort to compile all the manufacturing instructions, bill of materials, etc. into an all-in-one PDF that will be a complete set of instructions. Every bolt, every step, thorough and complete and simple to follow, all in one PDF you can print out and follow ... unfortunately that necessitates having current specs and CAD models, so it goes hand in hand with updating the wiki articles, and that is what is being done.

I am trying to find out who the active CADders and documenters are, and who are willing to step up to the challenge to help out.

In the meanwhile, I am stamping caution notes on every page that has not yet been checked and verified to be current ... I expect most, if not all of those instructions and models are out of date with the current builds. I am very pleased that the CAD designers are prompt and ready to do the updates when they get the current spec info. I am very close to being accepted for a project visit (got a call from Marcin; just waiting for confirmation on my DPV application) and when I get there, I will focus first and foremost on gathering current specs for the current build, and getting those specs out to the CADders and the maintainer of the Bill of Materials spreadsheet to update their files.

The last CAD model I expect to be updated is the one already in most serious need of updating: the overall CEB Press model, visible on the main CEB Press page and several others. Unfortunately, it will likely be the last to be updated, as we need to update the specs on the individual parts first before the model as a whole will be completely up to date. Please bear with us, and I hope the eager beavers wanting to download, print and build their own CEB press can appreciate the heavy steam we're making to get documentation to the point you can actually do that!

I'm wondering if anyone else if having trouble importing the cebIV "step" files (both 203 and 214 files). When I try to import them into Alibre it just stops, like the file is corrupt or something. I've tried on a few different workstations (with different versions of Alibre) with the same results.

I'm able to import the parasolid assembly but it appears to have some parts missing. 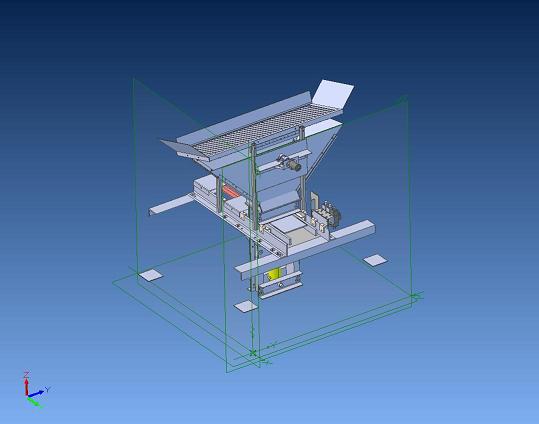 If there is a higher level assembly in with the .x_t files please let me know. Thanks. Rob

Suggest putting a link in this page to: CEB_Press/Current_Downloads Rob

After lengthy overview of the CEB Press designs, my group identified some basic flaws with the hopper design, which we believe should be improved.

- Secondly the hopper itself is solidly mounted to the device frame. This reduces overall vibration in the hopper, again allowing aggregate to settle inside the hopper rather than flow at an optimal rate (allowing the use of a smaller shaker motor). The hopper needs to be mounted securely to the device through the use of vibration damping rubber mounts, or some kind of spring loaded mount. But allowed to float inside the chute. Example of mounts provided here: http://www.mcmaster.com/#rubber-mounts/=ltoggo

Using this method would conform to industrial standards where any chute or hopper is used in conjunction with a shaker. The entire hopper needs to be allowed to shake in order for the shaker to really do its job. Otherwise you're just wasting energy to shake something that you have built to withstand shaking.

We've never seen a hopper with a straight face or that was bolted solid. They are always fastened to spring loaded mounts of some kind. This will also increase the life of the machine. Breakdown will occur at the mounts which are only a few dollars, rather than in the frame or structure of the device which are more expensive in both time and material.

Those are just my thoughts,