built another battery prototype. still having trouble storing a charge. looking at the voltage graph of the charge it looks like it is charging, but when i try to drain the battery it dies within seconds. im not sure, but im guessing that part of the chemical reaction is happening but not all. Nickel-Iron_Battery/Chemistry

next steps. going to mix graphite into the iron. going to try some different charging procedures.

at FeF helping with the dozer build.

drew up some design ideas for hydraulic systems for switching between parallel and serial circuits between motors. 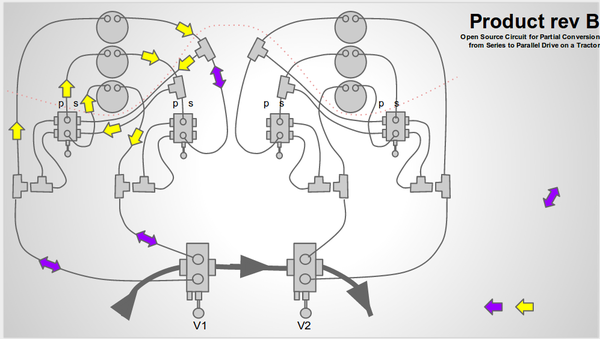 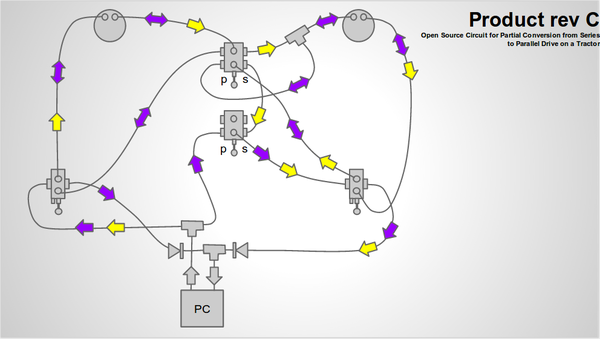 another mount for the cab

sketched some rough ideas for cab mount. used some of the dimensions from LifeTrac 6

tried some different mounting ideas for the backhoe pivot

made a sketchup model attempting to put chain around existing pivot pin. was only able to get a total 100 degree range of motion. to get full 180 degrees will have to extend the pivot pin above/above main mount, or make changes to structure.

to use the stock track chain with 3x8 cylinders, the system will need to be mounted below the pivot mount

removed one of the 4x4s on the quick attach mount.

made some more mount ideas for the arms

the puller seems to still have the best performance

arm syle with cylinders pulling from above

it looks like the full size bobcat standard attachment plate will just about fit the width of microtrac. trying to make it work with arms. still need to make hydraulic cylinder geometry work.

started spreadsheet on hydraulic lift capacity. need to do one to approximate tipping weight. 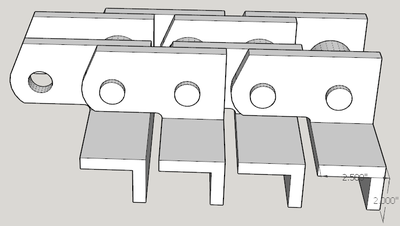 started doing some work on tracks. i think using the style where each sequential track is inner then outer will simplify welding work. will it create problems for sprocket rolling into gap? pinch point?

need to hunt some plugins or converter, cant export sprocket from openscad and import into sketchup

general updates and tweaks to tensioner

put tensioner on small idler. might also need to figure out how to tension 12" pully in front of sprocket. 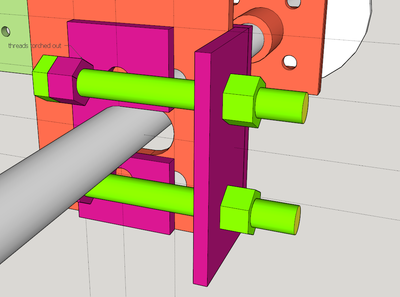 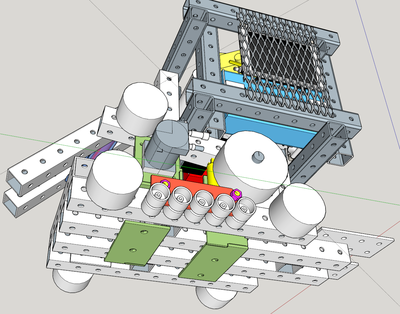 updated File:Ose-trailer-high16-20150428.skp to have a platform attached to axle 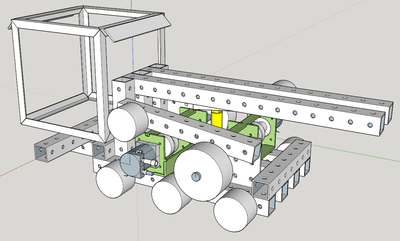 tweaked the trailer design a little 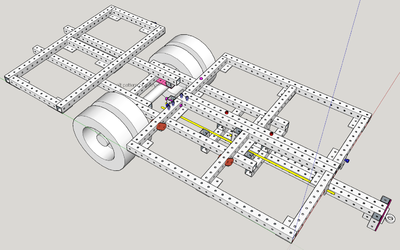 File:Print-traileraxel.skp - Trailer Axle at Warehouse (you can zoom and rotate below:

To see how these are used to make scale models, go to Lay-Flat_Trailer#Scale_Model_Rapid_Prototyping

had to order some more drill bits. some of the ones i got were super brittle and broke quick.

think im going to try to build up the portuguese wiki pages. will also use it as an opportunity to test some best practices ideas. i'd like to have a clear table for versions, change log, approx number built, link to file landing page.

finished cleaning the holes of one side of one cage. i held it flat and poured water evenly over the holes. took about 6 seconds for it to drain through. continuing on.

Sign up for osemail on wiki. Will return to dozer gear down.-MJ

i used https://www.3dhubs.com/ to order some larger cages to compare and test out. the local guy that printed them had a very high quality print with ABS, much better than my prints. even with a better print it appears the design as-is requires to have a lot of holes cleaned out.

in the mean time, going to clear out holes manually and might test larger cages next week.

printed two larger cages. tested holes with some food coloring. put a few drops inside, filled sink with water up to top of cage, opened sink drain, able to see color come through holes that are open. it appears more than half of the holes are not open for water to flow through. going to try to get a small drill bit to quickly open up. also considered acetylene torch tip cleaners but i think they might be a fraction too big, and might not be able to cut into.

also, found this nifty website to compare text http://text-compare.com/ , i think theres a bug in the cage scad file

it seems that the nickle wires coming out of the cages were alone acting as the electrodes. The resting voltage was around 1.2V which is in the range of what would be expected. i lowered the electrolyte level below the wires and it changed the charge behavior. voltage would max over 2V quickly. In the config I lowered the max charge mA to 1. used the NiCd trick to start charging. I expect the voltage will plateau quickly. will be interested to see if internal resistance changes. will let charge for a day.

after a few hours i pulled the SD card to check the data. the data seems to show that the cell was increasing its voltage. and was indicating it had reached about 25mAh. i assume that is calculated and not truly measured like voltage. in the next couple days i plan to run a full charge, discharge, charge, discharge, charge analysis. i think that will give a true capacity rating.

here are the data for the fist charge attempt google doc