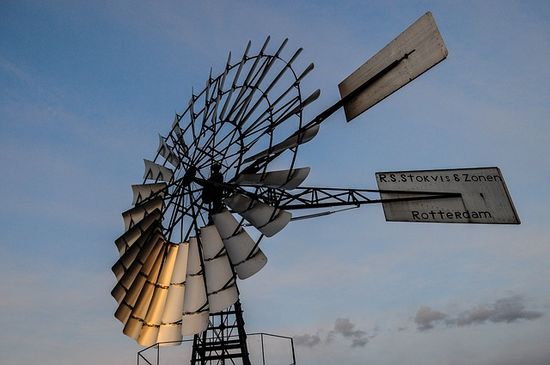 A multi-bladed windpump on a farm.

A windpump is a windmill used for pumping water, either as a source of fresh water from wells, or for draining low-lying areas of land. Once a common fixture on farms in semi-arid areas, windpumps are still used today where electric power is not available or too expensive. Windpumps are used extensively in Southern Africa, Australia, and on farms and ranches in the central plains and Southwest of the United States.

Water pumping is one of the most basic and widespread energy needs in rural areas of the world. It has been estimated that half the world's rural population does not have access to clean water supplies. Much of the use of windpumps in developing countries is for village water supplies, irrigation and livestock water supplies.

A windpump or any kind of water lifting device can be used to make electricity: when the water is released from the elevated reservoir, it can power an electric generator. This electricity is dispatchable (on demand), in other words the reservoir is a kind of "low-tech battery". Other mechanical power inputs can also be employed to add water to the same reservoir. As an example, see Stirling engine video from Tamera community where solar heat runs a water pump. The power of multiple wind pumps can easily be combined for more electrical power output. If the goal is just mechanical power output, then an electric generator may not be needed at all. The design is flexible and multiple different generators can be hooked up. The reservoir has multiple possible uses, such as for gravity-fed irrigation or even in aquaculture.