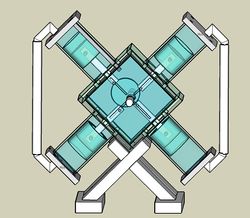 Alpha prototype under construction. See Open Stirling Engine blog for the current status of the first prototype of the 4 cylinder alpha configuration engine. This is a simplified version of the design as modeled in Google SketchUp 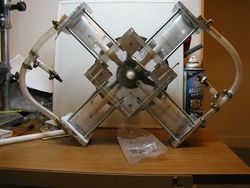 Current version of the prototype. Assembled version with piston rod guides. See blog for detailed status reports. Having problems with polyethylene bags developing leaks, so not running yet.

A Stirling Engine can operate quietly from any heat source to generate mechanical power (work). It operates by cyclic compression and expansion of air or other gas, the working fluid, at different temperature levels such that there is a net conversion of heat energy to mechanical work. It can be coupled directly to a hydraulic transmission, although only a handful of projects have explored this possibility over the decades.

Heat sources include Solar Concentration power as well as biomass.

From MJ - Regarding the Stirling engine, that is not one of our GVCS 50 technologies, so we are less interested in that - unless we are convinced that a practical model that can put out at least 100 watts of usable power from a small solar concentrator or biomass heat source. I understand that Stirling engines are more challenging to make work than modern steam engines based on the track record that Stirling engines never gained wide use, while steam engines were the backbone of the industrial revolution. For this reason - we are pursuing a modern version of a historically disruptive technology - the modern steam engine. We are currently building the Hadden Engine. However, I am quite open to collaboration on the stirling if someone can convince me, based on technical merit, that we can have a reliable product within a 3 year time frame that meets OSE specifications of lifetime design and low cost. This is possible but more challenging than the modern steam engine route. However, Dean Kamen's third world Stirling engine product appears to show that the feasibility is there - the question being - is it sufficiently simple, cost effective, and robust to meet OSE Specifications. - Nov 13, 2012