Returned to FabLab in Illinois, checked the Cura config I was using with our TAZ printer here. I'm getting good quality prints

Came back to OSE and heard that the printers weren't performing. Prints were cutting out half way through, just sort of inexplicable print failures. Hooked up my laptop with pronterface, discovered that with the printers connected via the USB hub I could control each independently with different instances of pronterface (i.e. clicking pronterface.exe a few times to open 3 different windows, connected each one to a different port, COM10,COM11,COM12 in my case).

Had a hell of a time getting the beds leveled - this is a huge point of failure! You can spend all day having trouble getting the first layer to stick if you don't take the time to level the bed and triple checking it - because when you change the height of one corner it changes the whole bed, so you have to go around a couple of times to each corner until you don't have to adjust it anymore. Boy would I love to do an auto-leveling mod! There'a a few out there, here's one, two, three sources of info. I have a TAZ to tinker with back in Urbana, so maybe I can test these and get experience with them before coming out to do an upgrade here. There's some pretty clever, cheap solutions to the problem of spending 20 minutes double checking the level before getting a successful print. Aiden linked me to this one, which looks super easy.

Decided a few things could be done to rule out possible faults:

In the evening, I downloaded the Lulzbot test code to rule out problems with my slicing (was still using an experimental Cura profile - I don't like Slic3r!). For reference: Octopus gCode for AO-101, Octopus gCode for TAZ & Hydra (Opens as plain text, right click -> Save As... to download)

This came out great on the AO-101 - a really nice printer that shouldn't be ignored just cause it's a little smaller and less impressive than the big guys. It's equipped with a .5mm nozzle - so it can lay down a load of plastic! Andrew's GoPro case was an estimated 90 minute print with a .35mm nozzle & .22mm layer height. With a .5mm nozzle, you can do .4mm layer height (Really thick layers!) - estimated print time: 30 minutes! The drawback to that nozzle width? Supports do not break off so easily, the walls are a good deal thicker. I guess Andrew was going to take a dremel to his print, but wanted to find a way where he didn't have to do post processing. We'll try it printing on a TAZ with a .35mm nozzle and see if the supports come off more cleanly.

I got a decent first layer adhesion on the Hydra after leveling the build plate and adjusting the Z endstop, but I wanted to turn it off since people were getting to bed. I'm still experiencing this really wonky hiccup that occurs when I slice with Cura & print with pronterface: occasionally (not a reproducable error, very frustrating) the the first thing the printer does after returning to home & moving to center is reversing / retracting (spitting out!) the filament several centimeters but then going on with the print - so there's no plastic coming out of the nozzle at first! I've ran into this before but still haven't figured out why it happens. Still researching slicer / printer combinations.

Matter Control looks very promising, but I couldn't get it to connect to any of the printers last night. I'll try again. Cura can control the print as well, but doesn't have the option to preheat, which is kind of a bummer. 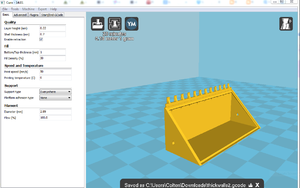 The ready-to-print model in Cura, scaled small for a test run 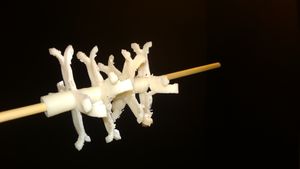 Four of the tines, 3D printed 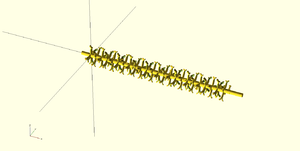 A render of the entire tines module 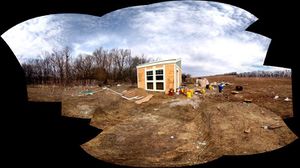 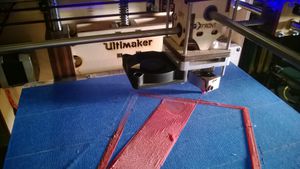 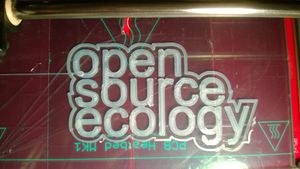