Silage: The first phase should be as brief as possible to maintain the quality of the silage. Excessive aerobic fermentation reduces the energy content of the silage and may cause heat damage to proteins.
The second or anaerobic phase begins when available oxygen is used up by respiration and aerobic bacteria cease to function. Anaerobic bacteria (bacteria that grow in the absence of oxygen) then begin to multiply rapidly and the fermentation process begins.
The best silage is produced when the most rapidly growing microorganisms are predominately of the lactobacilli species, as they produce lactic acid from the fermented plant material. Lactic acid lowers the pH of the silage. Fermentation completely ceases after three to four weeks when the pH becomes so low that all microbial growth is inhibited.
(Source: Nutritional Ecology of the Ruminant, P. Van Soest, Cornell University Press, 1994, p. 217.)

Fermentation is a metabolic process whereby yeast and bacteria convert carbohydrates to acids, gases, or alcohol. It refers to the bulk growth of microorganisms on a growth medium, often with the goal of producing a specific chemical product. It is a process that must be conducted free from air and atmospheric oxygen, and can be conducted either submerged in water (liquid state) or in a sealed container.

Depending on the starting material and the sugars it contains and the product desired a variety of microorganisms can be selected. There are different kinds of fermentation: lactofermentation, ethanolic fermentation, anaerobic/methanogen fermentation (producing biogas) as well as ABE fermentation. Fermentation by microorganisms has been mastered by humans for millennia, first for food preservation and more modernly as a source of chemicals.

In biochemical terms, fermentation is a metabolic process where organisms use an alternative to oxygen as a final electron acceptor in order to gain energy. Often the same molecule from which high energy electrons were harvested ultimately accepts the lower energy electron in a different molecular configuration, an example is the fermentation of glucose to ethanol. 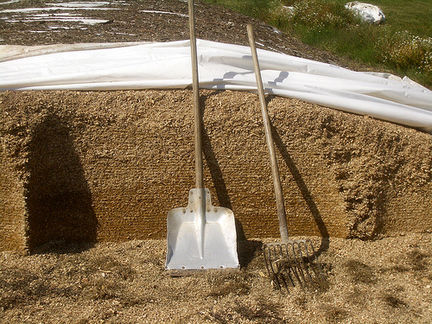 Flat silo - The lactic fermentation process is already finished after about 2 weeks. The lactobacilli produce so much lactic acid that the pH drops considerably, ending up somewhere near 4. That's too low even for the lactobacilli, so that they die too. Nothing will grow and the whole thing is well-preserved, possibly for years. 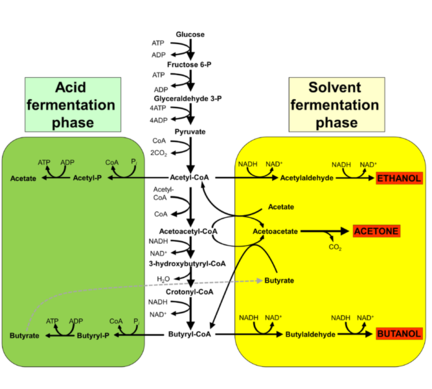 Pathway of Acetone-butanol-ethanol fermentation by Clostridia.

Lactic acid fermentation, also known as lacto-fermentation, is a method of food preservation using lactic-acid-producing bacteria. These bacteria feed on the starches and sugars in food and produce lactic acid, which lowers the pH and inhibits putrefying bacteria. The human gut flora contains many of the same microorganisms used in fermentative food preservation and consumption of fermented foods can have a high impact in improving digestive health and function.

Lacto-fermented foods have been used by civilizations around the world for thousands of years. Not only does the process preserve foods, it also supplies "friendly" Lactobacillus bacteria to the digestive system, and is claimed to improve digestibility and increase vitamin content of the foods that are preserved. While lacto-fermentation is a popular method among health-conscious cooks, its practicality for food preservation applications is being widely recognized again after years of neglect. The process does not produce the same uniform results as commercially-prepared "pickling," so many foods that once were widely lacto-fermented in the home have been abandoned in favor of their industrially-produced counterparts (e.g. pickles, sauerkraut).

The average home kitchen can use lacto-fermentation to preserve fruits, vegetables, or dairy products without specialized equipment or freezing. Most lacto-fermentation recipes require mashing or pounding of the fruit or vegetable to release the juices. Then, salt or whey are added to prevent spoilage while the lactic acid producing bacteria become established. The mixture is kept in an air-tight container, first at room temperature while the fermentation occurs, and later in a cool dark place for longer-term storage.

Sauerkraut juice is especially rich in lactofermenting organisms. It can therefore be used as a starter for other lactofermentative processes. It can also help with microbiome maintenance on the farm. By controlling the microbial composition (pigsty, cattle housing, chicken coop, etc.) beneficial effects can be achieved, such as reduced risk of antibiotic resistance, better animal health (reduced risk of infection), suppression of bad odors, possibly beneficial effects on feed efficiency, etc. This topic requires a dedicated page.

Fermentation products include small organic molecules with chemical functional groups that are useful for chemical engineering. Fermentation for chemical production has been commercialized and showed promise in the early 1900s before the refinement of the petrochemical industry.