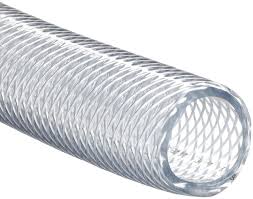 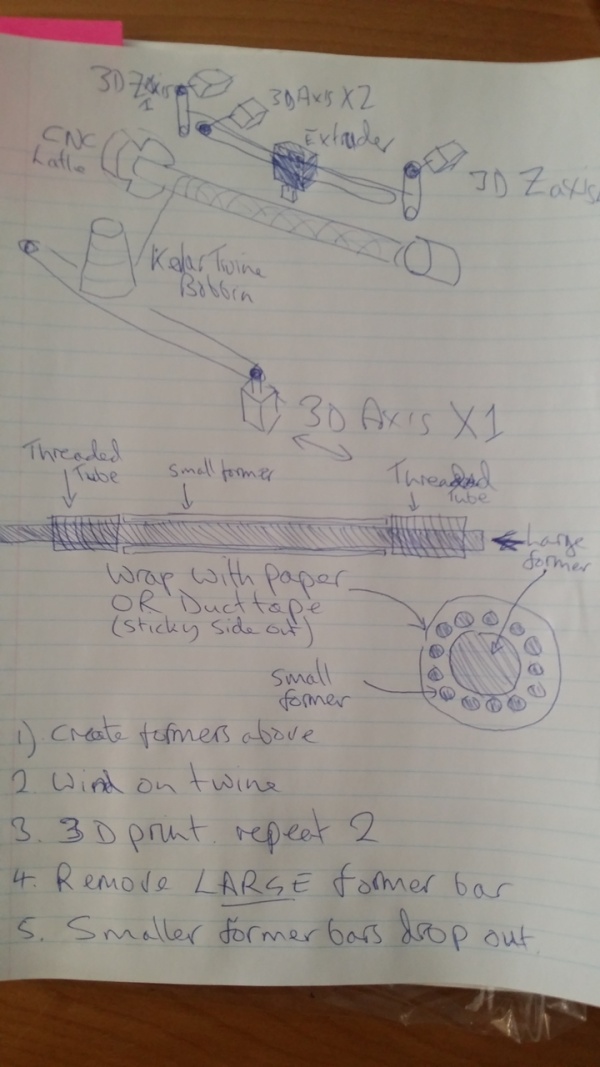 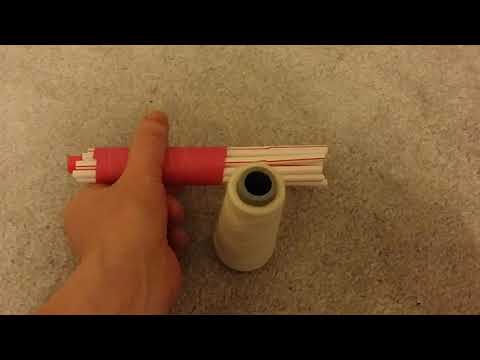 Basic concept is to wrap continuous strand fibre several times round a "former" (metal bar) in a cross-hatch arrangement then 3D print a single layer of plastic over the top, then repeat that process for several more layers. With diagonal cross-hatching the strength and rigidity will be enormous.

for increased speed, 1.2mm or greater volcano E3Dv6 nozzles cwn be considered, although only for large ID tubes due to the need to have multiple interwoven layers.

TODO details, such as considering epoxy resin at the start and end of pipes

TODO, embedding metal screw threaded fittings into the ends of the pipe as it is formed, to aid in rapid assembly and construction of frames.

If this is *not* intended to be done (taking the former rod(s) out), for mechanical reasons, or if the end parts cannot be made hollow for some reason, then one alternative is to use a cardboard or other suitable former (perhaps a pre-existing plastic hollow pipe, or thin-walled metal tube) into which the steel end-parts are embedded or attached, prior to the twine-wrapping and CNC-lathe-style 3D-printing process.

With there being no way to remove the internal former if that is the case, the selection of a cardboard or plastic tube is to greatly reduce the weight of the final result. If metal rods are to be left inside the tube, then bearing in mind that they are not really intended to be attached *to* the pipe as it is being 3D-printed, they do not contribute much to the structural strength, and, worse, simply increase the final weight.

One of the key reasons for using a metal former (particularly a solid bar) is because of concerns about the pipe "sagging" under its own weight as the 3D pipe is being printed. If cardboard, thin steel tube or a pre-existing plastic pipe is utilised as the "internal former", the concern is that this may not be rigid enough, particularly when considering 3D printing pipes over a metre in length and of narrow OD (15mm or less).

One idea considered was to have a pair of "roller tracker balls" as part of the frame, just underneath where the 3D printer head operates, on which the 3D-printed pipe would sit. The reason for having track-ball-style rollers is because the pipe not only needs to move back and forth in the X-axis, it needs to be *rotated* about the X-axis using the CNC-lathe Stepper Motor, as well, thus requiring *two* degrees of freedom of motion in addition to providing support for the 3D-printed part.

However, here, we see an inherent problem: as the pipe is being 3D-printed, it will *increase in outer diameter*. This would have to be taken into consideration, i.e. the gcode-generator, would have to be fully-aware of the geometry of the machine *and* the construction. As an alternative - for a first iteration - it would be far simpler to not have to do this, and to stick to high-rigidity low-density internal former material (perhaps even titanium or solid carbon fibre).

Obscenely Strong Pipe if Cost is a non issue Idea from User:Eric