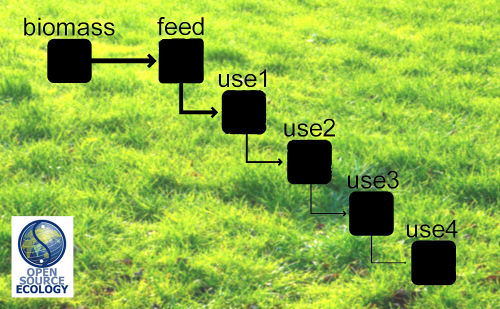 Cascading use of energy: the residues of one process are the feedstock for the next process in the chain, which is again linked to another process, and so on, until most of the original bio-energy has been consumed. Example: silage is fed to cattle, then cattle manure is consumed by Black Soldier Fly larvae. The leftovers from this process are used in vermicomposting.

Integrated Food and Waste Management System (IFWMS) (also known as “Zero Waste Agriculture”) is a type of sustainable agriculture which optimizes the use of energy and nutrients in a synergistic integrated cycle of profit making processes where the waste of each process becomes the feedstock for another process. One of the key people who developed the concept was the late Prof George Chan of Zero Emissions and Research Initiatives (ZERI).

Aspects may include: optimization of food production in an ecological sound manner, reduction in water consumption through and recycling and reduced evaporation, energy security through biomethane (biogas) and biodiesel (micro-algae) as by-products of food production, provides climate change relief through the substantial reduction in greenhouse gas emissions compared to traditional agriculture with fossil fuel usage, reduction of pesticide use through biodiverse farming and integrated pest management. A larger conglomerate of complex IFWMSs can be found in an Eco-Industrial Park. The IFWMS principle is also incorporated extensively in Eco-Cities.

Project at the University of Turin

OSE assessment: Integrated food systems are desirable. Here is a high level proposition. As ecological collapse moves forward, here is a regenerative proposition, which is worth pursuing and developing at all scales. 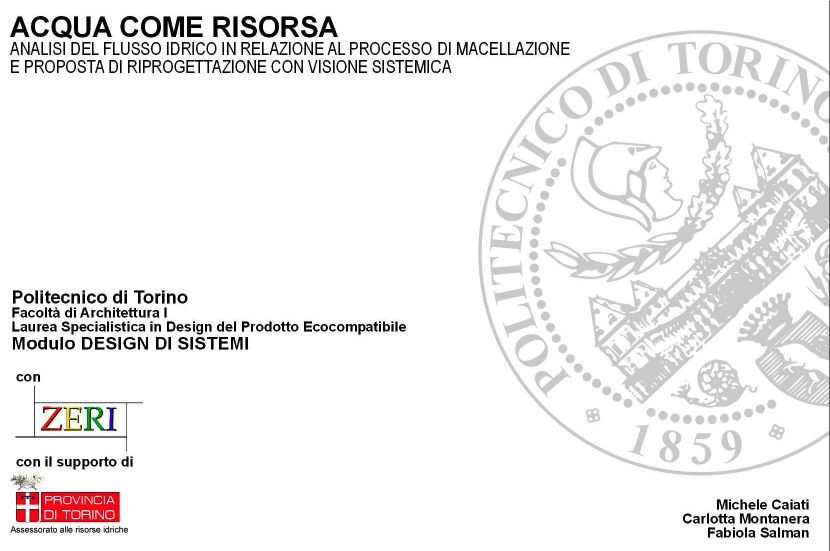 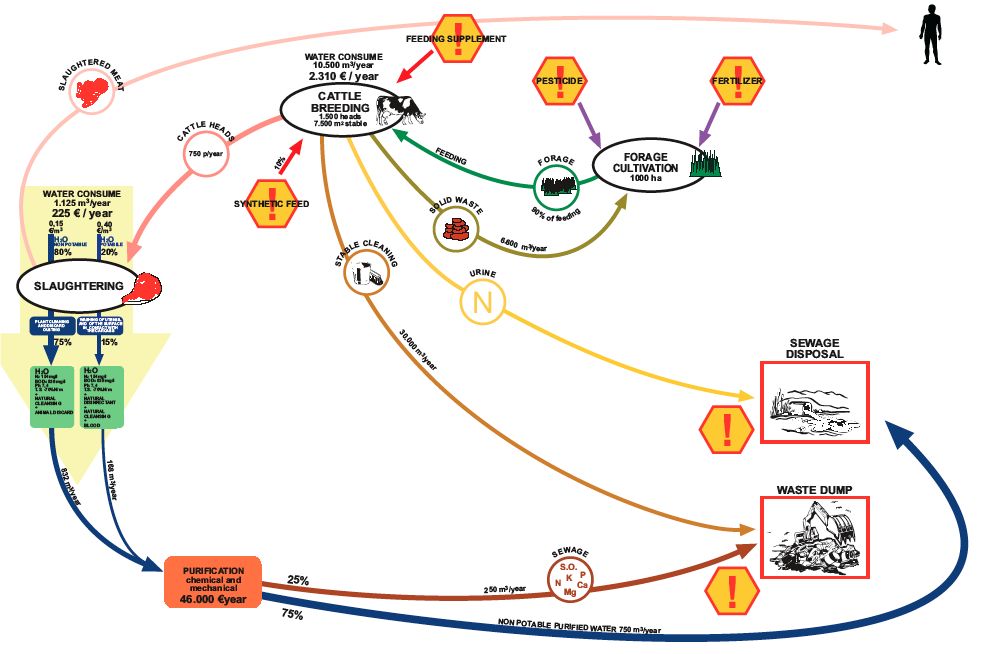 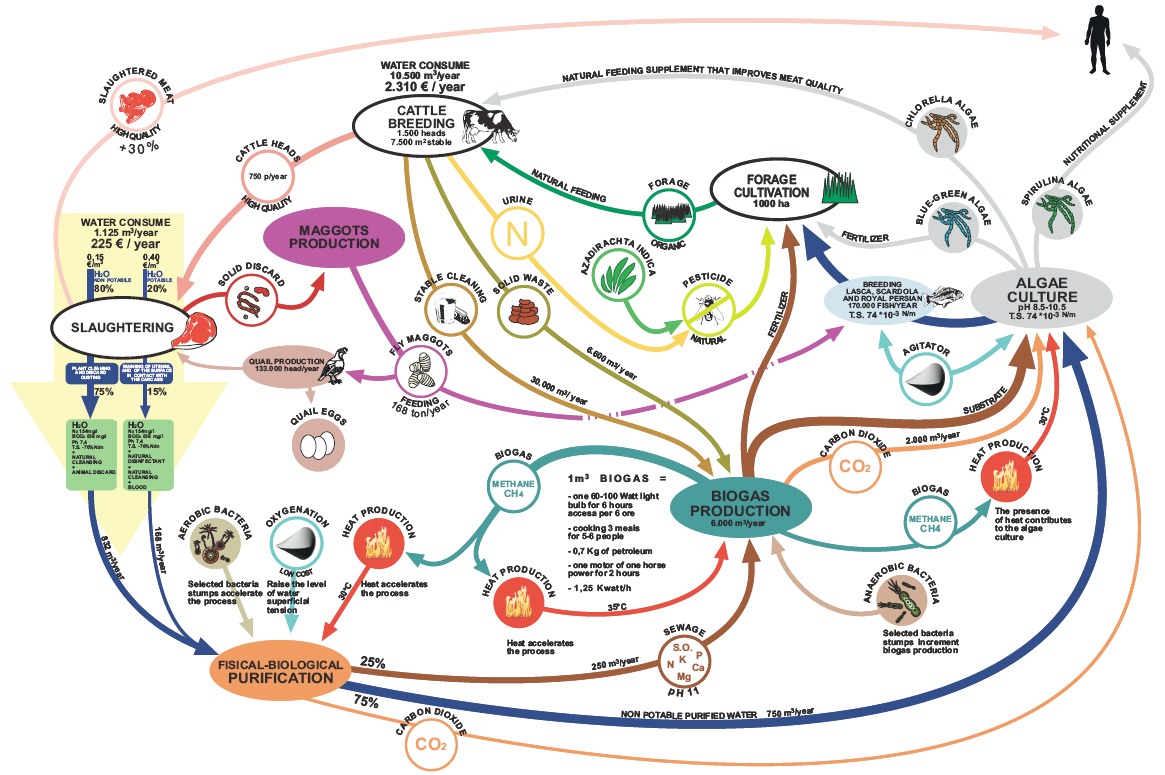 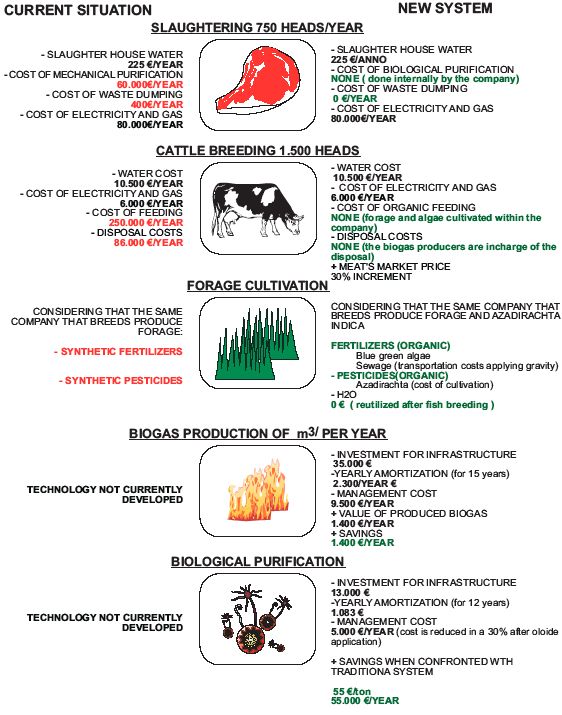 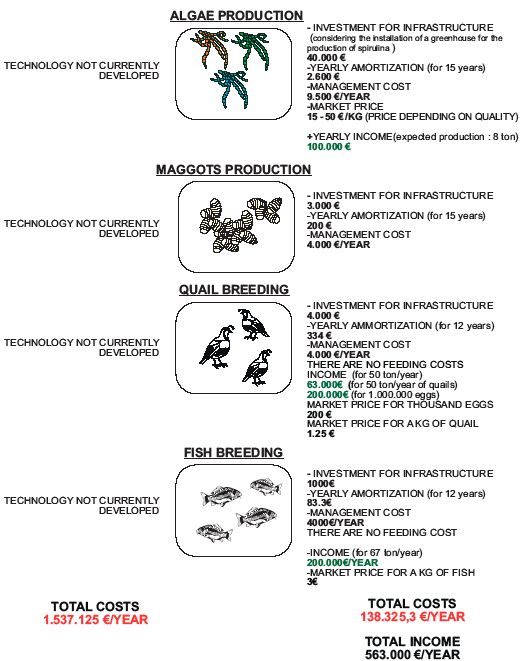 Compressed biogas from IFWMS can be used to power cars. See this: [1] - this is from ISIS, who have tried Dream Farm 2 as a model IFWMS.

1.9.09 - Integration is not easy. For the entire system to work - major, diverse infrastructure requirements exist. These may include water-tight storage vessels, ponds, vats, earth structures, containers, etc. - which at a large scale, require significant startup capital, heavy equipment and large-scale planning to implement. Materials handling is a huge requirement. Because of the above difficulties and others, traditional farming remains at monoculture.

One of the main keys to diversified farming is availability of equipment - which is being addressed by the Global Village Construction Set. With basic earth moving equipment available, Factor e Farm will be implementing a system in 2009. Capacities include earth moving, pond digging, lumber generation for rot-resistent containers, and soil preparation equipment. Next in line is the genetic base.

Many proposed IFWMS concepts include biogas as a central component. Some criticism has been leveled against this because of its relative energy-inefficiency, for example in this extensive discussion ("An Unconventional Way of Raising Pigs, Chickens and Cows") by Dr. Paul Olivier of EPWT.

A large number of additional IFWMS diagrams were made by OSE contributor Rasmus Kiehl while working on the OSE wiki in 2009. This material has been archived at: http://opensourceecology.org/wiki/IFWMS-Kiehl2009Archive