We start by looking at how an old fashioned square wave inverter works. source 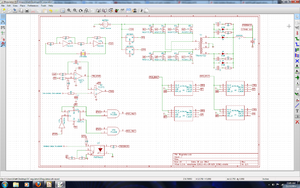 In order to understand the control waveform diagram, the concepts "amplification", "sum (superposition)", and "comparator" must be understood. 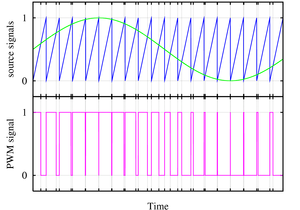 The blue triangle wave is the carrier wave. High frequency.

The green sine wave is the reference wave. Desired output frequency and waveform. 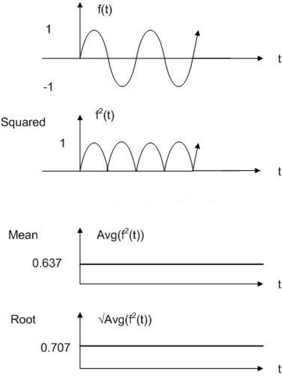 What the hell is a root mean square?

Outline of suggested design methodology (from Darren Vandervort, formerly of R&D of Power Electronics at Intel)

Step Up + Voltage Regulators: to 170V

In summary, use a voltage regulator with circuitry to make a reference sine wave at the desired AC frequency and a carrier triangle wave at high frequency, compare the two waves to get a PWM signal and run that into an H-bridge with high DC input from a boost converter, then followed by a filter and a feedback circuit. Tada, inverter.

Some from Universal Power Supply/Research Development.

The company MGE UPS seems to have merged with another one named APC, but the concept is good. This inverter is scalable up to 20kw. It looks like the inverters are designed to share some resources and are just connected in series.

From wikipedia on scalable 3 phase AC: To construct inverters with higher power ratings, two six-step three-phase inverters can be connected in parallel for a higher current rating or in series for a higher voltage rating. In either case, the output waveforms are phase shifted to obtain a 12-step waveform. If additional inverters are combined, an 18-step inverter is obtained with three inverters etc. Although inverters are usually combined for the purpose of achieving increased voltage or current ratings, the quality of the waveform is improved as well. 1