The universal power supply contains the power electronics and power supplies for: 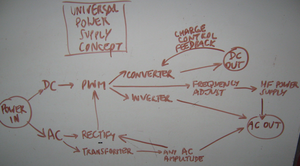 As an example, the Zapp Star 1000 Nickel-Iron Battery is listed as 15" x 6" x 20". Ten of these for a 12 volt battery with 1000Ah would require 10.4 cubic feet with an approximate weight of 1400 pounds (using similar BeUtilityFree specs). This is not man-portable. Scaling down to 12 volts at 100Ah reduces the dimensions to 1.5 cubic feet and 150 pounds. Build ten of these and you can wire them in parallel to increase work time or in series to increase voltage (which may be advantageous in charging). Assume roughly 1.5 cubic feet 150 pound 12 volt 100Ah battery cube.

What are the dimensions of hydraulic power cube? Use the same cube frame? -The power cube seems to be 2' x 2' x 2' so it's 8 cubic feet. I'm gonna go ahead and assume the battery on the zappworks homepage isn't the one referenced in the spec sheet. This one looks more like the dimensions listed. The dimensions of the power cube are probably exterior, so the interior dimensions are probably less than 24". You could fit 4 of the Zapp Star batteries for sure. However, adapting the technology to a more GVCS-appropriate set of dimensions would be beneficial. For example, a power cube's volume could be divided up neatly into 5 sections of 24" x 24" x 4.5" which works out to exactly 1.5 cubic feet per section. So you'd use 7.5 cubic feet of the 8 available. Based on the weight you used previously, filling up 7.5 cubic feet with nickle-iron batteries would weigh almost exactly 1000 pounds. The LifeTrack could move three of them at a time. More importantly, 2' x 2' x 4.5" batteries would neatly stack right next to a power cube. One could be bolted on by itself or five could be jammed into a pseudo power cube frame. You'd just add one more battery whenever you wanted another 100Ah. Assuming 10 cells per battery, that would make them each around 2.4" x 4.5" x 24". I don't know if that's a practical set of dimensions for each cell.

In practice, the above will be implemented by refining one functionality after another, and adding modules that will allow for different functions and scales.

We're interested in a universal, modular power conversion device for electricity. I am talking about different modules that can be plugged together for something like a Lego Set of power electronics. Each module would in itself be modular, so it can consist of a number of units connected for scaling current or voltage.

That just about covers all power devices for advanced civilization, more or less.

The general scheme would be to: (1) rectify a typically oscillating input from some power generating device, if it's not DC already, (2) chop it up, (3) scale it, (4) form it, (5) and finally, spit it out as DC or AC.

We want to create a universal switched mode power supply kit, with some power conditioning and regulation.

Please propose a basic starting circuit with the following specs: (1) Takes any AC input (from an ac generator) to either battery storage or an inverter/converter. (2) Specify parts for a system that can runs from 100W to about 20kW for starters. Is this feasible, or is the problem statement ill-defined?

After the above, we'd have to go to 3-phase converters, since many appliances of interest (such as induction furnaces) run off 3-phase.

The following design may not be safe or functional. Use at your own risk.

Drawing Power from Grid without Transformer for *Low Power* Applications

Precise voltage measurement with the Arduino

Low-Pass Filter a PWM Signal into an Analog Voltage

Few high power stackable inverters without bells and whistles exist. Of those, modified sine wave appears to be the majority.

Based on youtube videos people seem to be doing ok with other sun inverters.

Alibaba also says this company is verified and has a paid membership for doing serious business with customers.