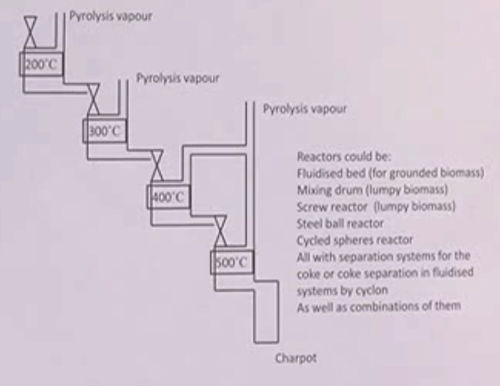 Staged Pyrolysis: Example of possible implementation of this technology.

Pyrolysis is the thermal decomposition of organic matter under an inert atmosphere. Ligno-cellulosic biomass is a common feedstock. The process produces non-condensable gas, bio-oil and biochar. The pyrolysis oil includes more than 300 valuable oxygenated compounds, such as furans, ketones, phenols and esters (see also: Biochemicals from Pyrolysis). Certain phenolic compounds are known for their insecticidal and fungicidal effects.

Different constituents of bio-oil can be difficult to separate. However, the composition of the off-gas is strongly influenced by temperature (see also: Wood Preservation by Carbonization). Therefore, when temperature is applied in different stages, different fractional components can be captured (hence: "staged pyrolysis"). In other words, the value fraction from each step is improved and tar formation is minimized.