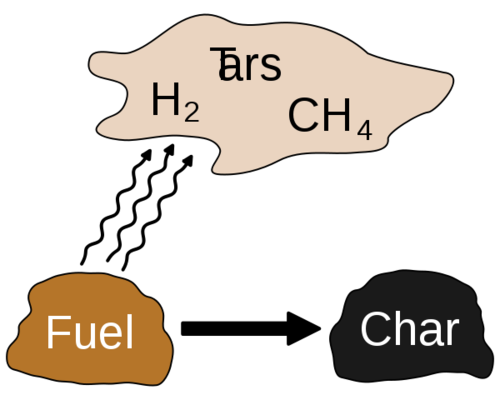 Torrefaction removes moisture and some volatiles from wood. Further heating leads to carbonization, which mobilizes more volatiles and changes the properties of some of the constituents (e.g. due to polymerization). For the purpose of preservation described on this page, the reaction temperature would have to be kept below a certain point (roughly ~270°C) to avoid charcoal formation and embrittlement.

As the title implies, wood can be heat-treated to make it more resistant to biological degradation due to reduced water absorption. Careful monitoring of the reaction temperature is necessary, as detailed in the section below, otherwise the product will not have the desired specifications. Heat-treatment also leads to browning, making the wood resemble tropical (rainforest) woods. During the reaction, the wood will give off some volatiles, initially mostly moisture and later CO2, CO, acetic acid and methanol. These are valuable co-products and can be captured.

(This section was taken from this FAO page)

As the wood is heated in the retort it passes through definite stages on its way to conversion into charcoal. The formation of charcoal under laboratory conditions has been studied and the following stages in the conversion process have been recognised.

* at 20 to 110°C The wood absorbs heat as it is dried giving off its moisture as water vapour (steam). The temperature remains at or slightly above 100°C until the wood is bone dry.

* at 110 to 270°C Final traces of water are given off and the wood starts to decompose giving off some carbon monoxide, carbon dioxide, acetic acid and methanol. Heat is absorbed.

* at 270 to 290°C This is the point at which exothermic decomposition of the wood starts. Heat is evolved and breakdown continues spontaneously providing the wood is not cooled below this decomposition temperature. Mixed gases and vapours continue to be given off together with some tar.

* at 290 to 400°C As breakdown of the wood structure continues, the vapours given off comprise the combustible gases carbon monoxide, hydrogen and methane together with carbon dioxide gas and the condensible vapours: water, acetic acid, methanol, acetone, etc. and tars which begin to predominate as the temperature rises.

* at 400 to 500°C At 400°C the transformation of the wood to charcoal is practically complete. The charcoal at this temperature still contains appreciable amounts of tar, perhaps 30% by weight trapped in the structure. This soft burned charcoal needs further heating to drive off more of the tar and thus raise the fixed carbon content of the charcoal to about 75% which is normal for good quality commercial charcoal.

To drive off this tar the charcoal is subject to further heat inputs to raise its temperature to about 500°C, thus completing the carbonisation stage.

(from Industrial Crops and Products, Volume 19, Issue 1, January 2004, Pages 3–12 - see link to paper) Wood preservation by low-temperature carbonisation Pine (Pinus sylvestris L.) wood with dimensions (100×10×10 mm) was thermally treated at 275 °C in a muffle oven to impart resistance to microbial degradation. Low-temperature carbonised pine resulted in a visually homogeneously treated product with a substantial (about 70% w/w) reduced non-cellulosic carbohydrates content, as compared with untreated pine. These components have been removed or have been partly converted into hydrophobic polymerisation products, which results in reduced water absorption in air of different relative humidity (RH) for carbonised pine. The flexural strength at high RH and after immersion in water of carbonised wood is comparable with untreated and creosote impregnated wood. However, at lower RH the carbonised wood is less strong. Only trace amounts of polycyclic aromatic hydrocarbons (PAHs) and other phenolic compounds could be detected both in water leached from carbonised wood and untreated wood. Furans, mainly 5-hydroxymethylfurfural, have been demonstrated to leach in substantial amounts in the water from carbonised pine. An accelerated decay test in soil showed that low-temperature carbonisation of pine resulted in a product with considerably enhanced durability, as compared with untreated wood. Resistance of carbonised wood against environmental decay was similar or even better than creosote impregnated wood.