The Economy of Affection refers to an economy based on good human relationsips, as opposed to alienating human relationships that are typical of business-as-usual, and which are the core of socialist critique of capitalism. Open source, and its focus on transparency and inclusion - has the least fascist tendency of any 'ism' including 'open source' itself. Economy of affection is a term congruent with the principles of the Open Source Economy - emphasizing that the product of a sound economy should be improved relationships, not merely the production of financial capital. Effective and efficient production is essential to the economy of affection, as a prerequisite to happiness. Thus, terms such as Gross National Happiness are relevant in the Economy of Affection. Thus, the pursuit of life, liberty, and happiness can be reframed as pursuit of the open source economy - beyond business-as-usual. This addresses the yet-unresolved conflicts: environmental destruction, struggle of 'isms' from fascism to communism to capitalism as the preferred way to provide human needs, and global security in general. Everyone wants to get along, though the ways to get there are many. But what are the core principles that are generally regarded as life-giving, in the good old fight of good versus evil? We can build upon the concept of the Economy of Affection, and inject open source into the mix.

The open source economy of affection is one perspective on the world of OSE. Open source collaborative design is our core. Our notion of a transparent and inclusive economy of abundance is not about the rural-urban divide - but its integration. It is an integrated system of thriving where denizens are more responsible, and less bureaucracy is needed. Bureaucracy is displaced by distributed, decentralized systems - governed by open source best practices. These could be open source algorithms - but these must respect The Limits of Artificial Intelligence. Hobbesian centralism is attractive to many, due to the ignorance of the masses. However, the masses include The Best and the Brightest, for which it is lifelong learning - not punishment - that is the preferred solution to the human condition. OSE is creating lifelong learning programs starting with the OSE Apprenticeship.

The economy of affection has seen little success to date, because selfish orientation dominated in the 20th century. As society runs into issues associated with runaway capitalism, it becomes apparent that considering others is a good thing. Thus, human and environmental regeneration can once again take hold as a strong pattern. We have seen entire nations and continents - human and wild - trashed by poor management and brutish operating systems. The open and collaborative economy - which is perhaps synonumous with the economy of affection - is a way forward.

See Wendell Berry's notes on the economy of affection -

The concept was the Economy of Affection was first implied by Chayanov, a Russian revolutionary, and the specific term was first used by Göran Hydén. See Economy of Affection on Wikipedia. It apprears Chayanov's promise was the communist version of concepts of Flexible Fabrication as promoted in the seminal book, The Second Industrial Divide, which currently has an upward trend in the form of popular ideas such as FabLabs and Fab Cities. We envision the OSE movement as a practical route to the FabLab/Fab City utopia. We envision a transition from a paradigm of authoritarianism that Thomas Hobbes proposed, which has since in significant part been succeeded by liberal democracies such as Europe and North America - and we invision the Open Source Economy as a political economic principle guiding a world of post-scarcity economics. Which is a question of personal and political transformation from a zero-sum world to win-win Positive Psychology.

In the digital age, open source sharing of information is the enabler of unleashed productivity. For the first time in history - humanity has a good chance of transcending Artificial Scarcity by means of advanced, appropriate, open source technology . Eradication of artificial scarcity implies reduction of Competitive Waste. Open source hardware is seen by OSE as the critical enabler of the economy of affection in the information age. Thus, in the digital age - we propose a more precise form of the concept: Open Source Economy of Affection. This, however, has the cultural barrier - in that we need to transition beyond economies based on enforced scarcity, This is required to deliver OSE's Vision of transparent and inclusive economy of abundance. OSE intends to do this via lifestyle engineering towards The Art of Possibility. In such a world, resource conflicts, corruption, and fascism become a thing of the past.

The idea is that we convert the scarcity-based business models of typical capitalism into collaborative design for a transparent an inclusive economy of abundance. We envision an economic system that nurtures affection to others and to nature - not one where taking advantage of others, or of nature - is the norm.

OSE asks - how do we solve all of the pressing world issues without leaving anyone behind? Our vision is Collaborative design for a transparent and inclusive economy of abundance. Starting at the level of material abundance. Abundance is a rigorous requirement. Abundance has less to do with long-haired drum circles, but more with the discipline of attaining industrial productivity on a small scale, as discussed in the OSE founder's TED Talk.

The industry standard is to hire employees - and managers and workers are not encouraged to be friends.

How do we shift this from a capitalistic mindset to one of the Economy of Affection? Is it possible to set up the livelihood dynamic where self-determination and friendship are the norm?

And once we attain self-determination: how to align people to do good work as opposed to people going off-mission?

OSE is embarking on a design incentive challenge where the goal is to create 100 part time Un-jobs as a result of the challenge. The challenge results in Extreme Manufacturing operations for a professional grade, open source cordless drill. The outcome is intended to be either part time or full time engagement. The intended time for the 100 un-job startup is at the conclusion of judging for the challenge - where a winner is selected, and relationships with distribution are already established so that the 100 winners set up operations within a month or 2 of startup time. As one case - there may have to be an immersion training course - perhaps 2 weeks - where we all meet - and then another 2 weeks is committed to setting up efficient production. Ideally, there is a $3k startup cost that is either provides via the Incentive Challenge reward - or perhaps as pre-orders from the distribution partners.

The first solution for alignment (non-alienation from work) is efficiency afforded by the Extreme Manufacturing process. If people spend only a small fraction of their time - the concept is that we feel greatly rewarded - and we convert that activity to a source of inspiration.

But this requires a mindset as described in Curious?. Collaborators must find meaning in joining the movement by prioritizing open source development work over other attractive opportunities. This requires a special person. Is it possible to find such people, or do we assume that few people will have such alignment, and business structures instead fill the void of mission alignment? Certainly we can offer training in establishing a mindset of self-esteem, collaboration, and curiosity. Such a program of continuing education will require deliberate effort?

How does this play out in practice.

The economy of affection may well be contrasted with alienation for compensation, which was Marx's critique of workers being alienated from themselves and their true needs - in exchange for compensation. In other words, the opposite of Self-Determination. It may be said that alienation for compensation is the standard model of the Western economy, where in the USA, most people do not like their jobs and would rather be doing something else. This Gallup poll says that this number is 85% worldwide [1] and 66% in the USA [2], and 76% disengaged according to an HBR survey [3]. Gallup started tracking engagement since 2000, before that we probably din't care as much: 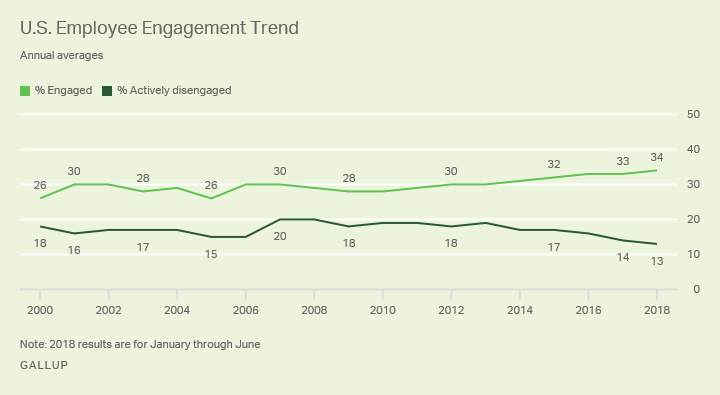