ALT-L Introduction Video ALT-L is presented as a preliminary step in developing an entire school curriculum based on the idea of coherence and connection. There is a potential to link this project to a wider set of Open Source Ecology workshops that consider an entirely different approach to the education system.

Wednesday May 6-Friday May 8

Worked on "ALT-L," an accelerated mathematics and computer programming curriculum for secondary school students. The course is under development here with two groups of students from eight countries meeting twice weekly over Zoom. Created a related training manual for the Guyana Prison system using open source technologies such as Linux and Python.

Work on OSE Challenging due to work, community and global crisis.

Workshop in Guyana with the Guyana Prison Service: The CSSP Project. This project aims to replace the current model of prison management with an approach based on human nobility, education and rehabilitation.

OSE Linux - we got six old computers working on Ubuntu using flash drives. Tomorrow will have an Open Source software workshop using OSE Linux on USB drives. We will use Python, FreeCAD, LibreOffice, etc. Showed the TED talk to our group of 12 prison officers from five facilities in Guyana.

Worked on the OSE Prusa in order to support the establishment of a STEM centre in Trinidad and Tobago and to prepare for a workshop with the Government of Guyana.

LIA summer STEM camp continued with 38 different students from Shenzhen, China. The students discussed, in the context of Marcin's TED Talk, the concept that the human mind, focused and in collaboration with others, has the power to make positive changes in society. Design of covers and caps for the OSE radial motor. Photos from the STEM Camp activities are here. Trying to find the USB where we collected all the FreeCAD files. These will be posted ASAP.

LIA summer STEM camp with 23 students from Vietnam and China. OSE Motor project part II - designing, printing and testing a radial motor. The motor concept was based on the following video: 3D-Printed Axial Brushless Motor for Drones Students were presented with the concept and asked to design such a motor from scratch using two rotors with eight disc magnets each and two sets of six wire loops.

Titan Aero finally working better with 1.5 full turns + a little bit more for good measure - has not jammed all afternoon now - three parts printed. Logistics for Microfatory STEAM Camp - rented a vehicle and contacted a few participants. A prototype of the OSE extruder has been nearly completed. The extruder gear is scheduled to arrive at Factor e Farm by tomorrow. Then it will be ready for testing. OSE D3D Extruder - Photo AlbumFiles

Discussion about design of OSE Power Electronics. Problem - transformers are expensive and inflexible. Solution - research the feasibility of creating a 120V buck converter. Would it be sufficiently efficient and would it be feasible to build? Here are some potential parts to use: 1kV Recifier 650V MOSFET. One problem seems to be that there may be a high level of energy loss in the circuit....Optocoupler (to isolate the Arduino)Some background theory

DIY Buck Converter based on the following video (and others): https://www.youtube.com/watch?v=L5oeY53pE0E&t=162s. Photos. All four 3D printers are down. A crucial piece of the extruder of the most reliable printer finally broke. CAD already done for the replacement part. Got the OSE D3D working again on Friday. Ready for printing on Monday - will print replacement part for other printer. Other 2 printers almost working...

Completed and sent CAD Drawings for OSE 3D Printer. Spent most of Wednesday working through a jam on the Titan Aero - it has jammed more in a few days than our other extruder has jammed in over three years.

FreeCAD Drawings for OSE 3D Printer. Note the use of parametric design in the CAD files - Spreadsheet values become variables used in constraint dimensions. The following is my most recent FreeCAD Parametric Part Design and Drawing Workflow:FreeCAD Workflow

How to Control an ESC with an Arduino Test of the OSE Motor.

Not all that much.

Thank you to Marcin and Catarina for a refreshing, enlightening and enjoyable visit to Factor e Farm and the Seed Ecohome. Returned to London.

Power Supply Design Tutorial Edited the Video Script Contacted STEM people in Nigeria and Pennsylvania based on the OSE STEAM Camp posted in this Facebook Forum Further communication with friends in Mexico regarding the STEAM camp. Contacted a friend of a friend in Kansas City - Baha'i Community.

Posted Microfactory STEAM camp on several Facebook STEM/STEAM Education pages. The Living Curriculum Marlin Bed Temperature Settings Worked on the Titan-Aero extruder repairs. The two parts of the extruder tube must be fairly tight (but not too tight!) to avoid leakage.

Completed the first model of the most difficult part to CAD in the extruder - the X-Axis bracket. Will now print CAD files and measure their accuracy before making changes to the CAD parameters. Hopefully this process will result in more accurate parts. 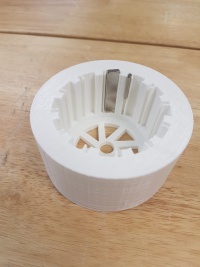 Discussed record keeping, file sharing and other skills for collaborative literacy. Created a sample page stub: Brushless Motor Design. Asked students to reflect on sessions learning FreeCAD. Found that it is not necessary to learn a whole lot about FreeCAD in order to get students learning it. Demonstrated two sample FreeCAD 0.17 design processes:

After that, students were directed to Youtube videos that covered specific additional skills:

Through this process, I learned how to do these skills from some students and was able to show other students the same, especially with polar patterns.

Prepared for and welcomed 19 students from Jinling High School in China. Introduced the concept of the OSE Collaborative Contest. Marcin spoke with the group over Jitsi on Thursday and on Saturday and proposed that the students participate in the OSE Collaborative Contest. It was well received despite the students' fatigue from travel and skiing. Introduced FreeCAD and had students download and install it. Some computers do not immediately work with FreeCAD; hope that the problem may be solved. We plan to further discuss the students' participation in the contest tomorrow and 3D print some of their early FreeCAD work on Monday. Created a link to LIA students' FreeCAD work. Currently the folder is being used for FRC preparation. After the FRC robot is built, we are planning to transition to OSE-related work in this folder: LIA OSE Club CAD Files

Heaviest schedule of the year - January and February; progress slower during this time. Working on STEM Curriculum for FeF STEM Camps - Summer School 2019.

Ordered parts for a brushless motor to be constructed as part of the contest and part of the Computer Engineering Technology class at London International Academy. In order to make the collaborative contest work, we will need to create a kit of parts to be easily shipped to participating schools.

Exams and marking - excellent ways to hinder educational progress. Discussed Canadian bill of materials with Russ Purvis. Discussed the upcoming OSE workshop in Prince George, BC currently in the planning phase. Several phone conversations with Charlie. Worked on some particulars for the upcoming OSE competition in January. Contacted a teacher in Iran to invite her to join the competition with her students. Sent a letter of reference to Russ with respect to hosting an OSE workshop.

Spoke with Charlie about development of OSE workshops. Spoke with Marcin and Catarina about the same. Updated Marcin about development of OSE club at London International Academy. We now have plans to include at least four schools in our first design challenge - School of the Nations in Guyana, Fujing Foreign Language School in Shenzhen and Jinling School in Nanjing. Was approached by a friend to contact Makerspace managers in St. Thomas and Toronto. Arranged a meeting with the makerspace managers at Western University. OSE Marlin v18.10 works for printing with new printer. Successfully printed base layer of a file. It seems that the extruder may have jammed. Will check again as soon as possible. LIA students continue to develop their FreeCAD skills and are able to design parts in parallel according to a spacial plan and assemble them into a larger model. Installed OSE Linux on laptop now with a new old-school 1TcB hard drive. OSE Linux did not recognise the card reader; everything else seems to work very well. Note: Stepper motors on y axis of D3D became alarmingly hot after about 15 minutes of printing. Perhaps this is a configuration issue; may need to resolve this before allowing the printer to do a full print.

Using OSE Ubuntu on laptop with fried SSD. Internet has connection through ping but does not display pages in Chromium. D3D Marlin recent version from OSE website installed in printer. Autohome produces a collision of the z axis with the extruder as by default the z probe is off the plate. Tried to move the y axis using various commands such as G0 Y40 and G1 Y40 all of which cause the Y axis to move until it hits the maximum physically possible position. Spoke with Johann Wong about the possibility of combining an OSE Makerspace skills (Arduino, CAD, etc.) + 3D printer workshop with Human Innovation PIE's soft skills innovation workshop through the London International Academy Foundation. Was using wrong Marlin file for D3D printer - will try correct one asap. Suggestions for D3D: use zip ties and clothespin springs for tensioning belts. This has worked exceptionally well and reliably for our Chinese Prusa derivative; the belts have needed nearly no attention in three years.

Was about to test print on OSE D3D when SSD crashed. Did Ubuntu fry it? Researching this.

Held an informal Introduction to Arduino Workshop at London International Academy to help two grade 11 students with a project. Spoke with Marcin about plans for the OSE design challenge, OSE club and possibility of a summer camp at FeF in May or June of 2019.

Wrote the suggested intro to Marcin's next TED talk: Marcin's Next TED Talk

Consultation about the establishment of an OSE Club at London International Academy and future directions for the development of OSE Clubs and Makerspaces.

Built a an OSE 3D printer at London International Academy

Prepared for the visit of Marcin and Catarina to London.

Conversation about OSE development with Charlie. In particular, discussion about education and its relationship to developing the capacity to lead a meaningful and productive life. Reference to overlap of Baha'i means and principles with those of the OSE - elimination of the extremes of wealth and poverty, building capabilities in a population, individual agency and initiative within a systematically evolving framework, etc. 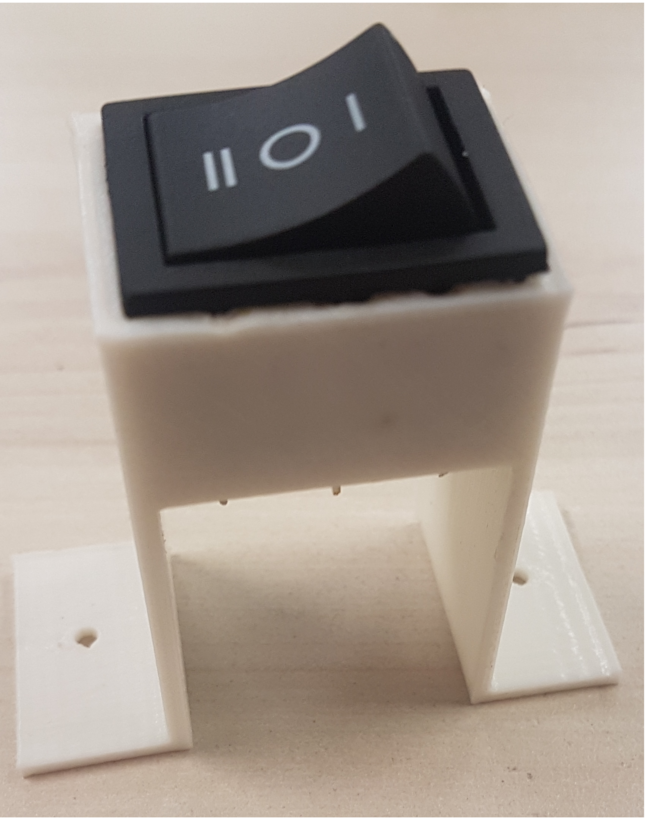 Many things happened including severe neglect of the OSE wiki Some highlights:

Saw TED Talk and wrote away to Marcin immediately
Retrieved from "https://wiki.opensourceecology.org/index.php?title=William_Neal_Log&oldid=254170"