Dan's using RAMPS in Oct 2013 to get the table up and running ASAP. The plan is then to replace it with something beefier so we can go faster. 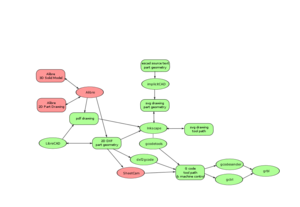 Correction for torch cut kerf width ("cutter compensation" in CNC lingo) needed. G40/G41 but grbl does not interpret these.

aka firmware aka motor controller (distinct from motor driver)

This is the firmware running on Arduino which converts a series of G-code commands to step/direction pulses for the drivers.

When Dan Benamy was getting things going again in Oct 2013, he was using Marlin because grbl doesn't work with RAMPS out of the box. Marlin also has pretty much out of the box support for 2 drivers feeding 2 motors on Y which we use for out long axis because it has 2 motors.

When someone (Chuck?) was working on using the steppernug, they were running a modified grbl fork https://github.com/chuck-h/grbl/tree/edge. Changes from standard grbl [1]:

In Oct 2013, Dan can't find host software (gcode sending) that works with marlin. He tried about 8 different programs. For now the process is to use Printrun/Pronterface and copy/paste 3 or so gcodes at a time into there, wait for them to execute, and run the next batch. Pasting them all at once fails (machine does the wrong thing) probably because the instruction buffer in marlin isn't big enough.

See GcodeCommunications for a list of programs to send the g-code file from a host computer to a controller.

Here's a test gcode file which Dan Benamy hand wrote. It works on marlin and draws a 2 hole by 1 hole plate- https://github.com/OSE/CNC-Torch-Table-OSE/issues/20

This whole section hasn't been updated for the Oct 2013 work using RAMPS. See https://github.com/OSE/CNC-Torch-Table-OSE/issues/11 for some of this with RAMPS setup.

The x axis (long axis) has 2 stepper motors. In the steppernug system, these have separate driver modules which receive identical step, direction, and enable signals.

For zeroing, the x axis needs to decouple - so if we get the x axis out of parallel, we can jog the x axes back into parallel by hitting their home switches independently. Steppernug supports this by allowing the Arduino to control a gate which blocks step pulses to the second driver module; in this condition the second motor will freeze and only the first motor will move. There is no provision for moving the second motor without moving the first, but that function is not required for the homing algorithm.

Each axis has two switches: a limit switch and a home switch.

There is an alternative switch configuration which places individual limit switches at the positive and negative limits of legal travel. However the configuration above is preferred because it supports faster homing and simpler control logic. Specifically:

The steppernug interface provides 5V power to sensor switches so either electronic or mechanical switches are easily accommodated.

The home switch should respond within one motor step time at the "creep speed" used for final approach. This speed might be ~100 steps/sec which gives us ~10ms.

The limit switch should respond quickly enough so that an emergency stop initiated by the switch will stop the machine motion before it hits a mechanical stop. This time is dependent on a lot of different design parameters, but is probably at least 10ms.

The limited response speed required allows us some latitude for noise suppression.

Since all switch signals pass through the I2C expander for I/O, there is about 150 usec (0.15ms) added, see here.

A second M code could shut down the entire torch (e.g. at the end of an unsupervised cutting session).

This presentation on plasma-cutting accurate holes also suggests that ramping down plasma current while torch is still moving is good practice. (It makes the electrodes last longer.) 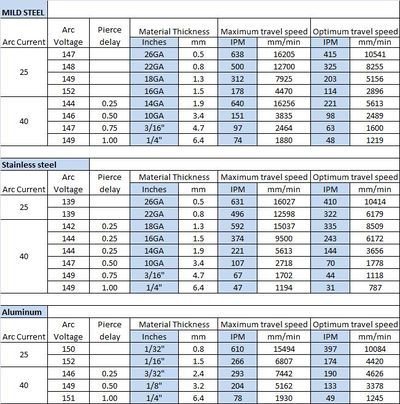 During cutting, an oxyfuel cutting torch is literally burning the steel with a blast of oxygen; most of the heat comes from oxidizing the iron. However to start a new cut ("piercing") you must preheat the steel, relying on the acetylene or LPG for heat. After the steel is red hot you boost the oxygen flow and make the cut. We will want an oxygen-rated valve controlled by the microprocessor. "Oxygen-rated" mostly means the valve is thoroughly cleaned of all oil or flammable solvents that tend to explode on contact with pure oxygen; good practical reference here. A solenoid valve like this in combination with an ordinary regulator would give basic on/off control, but see better suggestions below.

Fairly technical application note about how to do good oxyfuel machine cutting from ESAB: [5]

This long forum thread contains a lot of information about implementing small-shop CNC oxyfuel with programmed preheat, pierce, and cutting gas controls, auto ignition, etc. Based partly on this information, here are some control design suggestions for an Arduino-based CNC like CoolRAMPS or Steppernug/grbl:

Installing a needle valve at the solenoid air valve improved control smoothness a bit compared to video above. 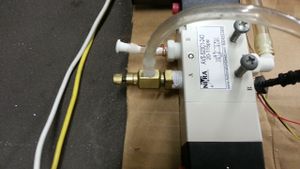 The cutting oxygen for the torch must be high purity (according to the ESAB note above less than 95% purity simply will not cut steel, and >99.5% is required for best quality). Until recently, this meant cryogenically separated oxygen, depending on a large capital plant, and thus the user must rely on commercially provided tank oxygen. For some 30 years, pressure-swing-adsorption (PSA) separators have been available, but standard designs do not remove argon and therefore result in about 95%-oxygen, 5%-argon output gas. PSA construction is low-tech and works very nicely at small scale, e.g. portable breathing-oxygen units, and would be quite suitable for OSE. 95% purity is probably adequate for the preheat flame (ChuckH conjecture). For higher-purity cutting oxygen, PSA can be extended with additional zeolite materials [8] or activated carbon [9]; despite this discussion there is no clear record of small-scale DIY implementation of 99% oxygen PSA.

Propane instead of acetylene. Note the large preheat oxygen flow (not in a consistent stoichiometric ratio to fuel) in this chart. Odd.

Would gasifier-gas or biogas & oxygen work? Probably, as natural gas is primarily methane and is a commercially successful cutting-torch fuel.