-Practicing with some mortar methods that I've been learning about.

-Did some timed runs, getting about 2.1 blocks per minute with current 7gpm pump. Realizing my main holdup is not having a loader to load soil in press.

-7gpm pump does well, but probably could have gone with 8-13gpm 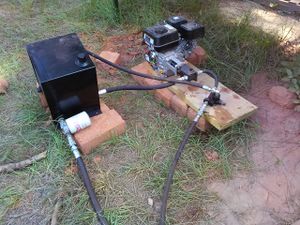 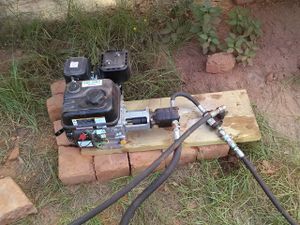 -using snap acting/limit switch [2] mounted with magnets from local home store for stopping the travel of the main cylinder drop, now the only thing that I'm using the pressure switch for is the compression step. Getting very consistent block heights with this method. 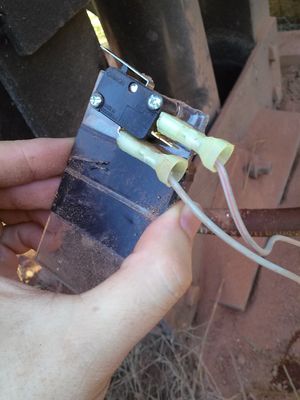 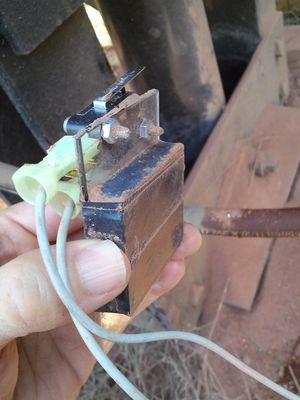 -added a few mixing paddles to get a more consistent mix, picture will come later

-Tried a grate at the bottom of the mixer/hopper with about 1" between bars. Works, and keeps out rocks, but gets clogged too much.

-have to be careful putting in cement, because if you put all of the cement on one side of the hopper it doesn't mix with both sides.

-Code that I'm working on that uses the Arduino Micro for the CEB Press with mixer module, based on original code by several others ((see CEB_Press_6_-_Controller_Module_-_3D_CAD) (WKJCEB.ino)

-The hydraulic motor on the mixer causes some pressure spikes, this necessitates some extra delays, de-bouncing, etc.) 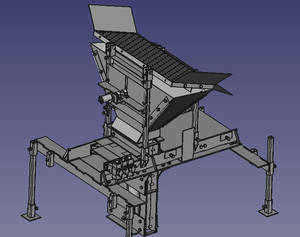 Outside of different hopper design - the other differences are: The only difference in the frame of the mixer version is that there is one extra hole in the primary arms, and one of the guards has some extra cutouts. The hopper support tubes are also slightly different.

-THIS IS THE STEP FILE THE CURRENT DESIGN FOR THE PRESS WITH THE MIXER MODULE CURRENTLY UNDERGOING TEST. 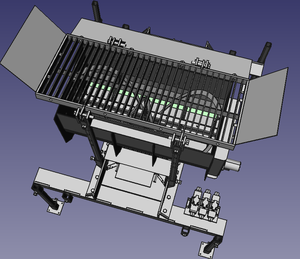 Do the tines need bending and/or twisting, or are they flat? 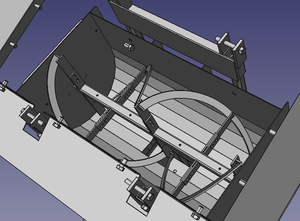 Inner gussets towards centerline of machine instead of evenly spaced from edges of hopper because they are thinner (1/8") than edge (1/4"): 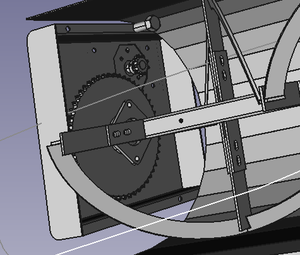 Anecdotal evidence says that AECT had an auger in their big hopper, but it was removed because it didn't work. And that Powell and Sons may also have a hopper.

1. "Augert will suck all the juice out of your hydraulics" - I don't think that is an issue with proper control timing. We have excess hydraulic flow during the motion of the secondary cylinder - which can be used to move soil.

2. "Requires larger hopper when in fact soil just needs to flow smoothly in the hopper" - Our goal is to help move the soil, as we know that soil does not always want to move smoothly.

3. "Soil should be mixed properly BEFORE it goes in the hopper." - This is true in all cases.

4. "The conveyor really helps us get a uniform (no stones no clods) soil mix into the reduced hopper--and we only turn it on to load dirt for 50 blocks and so it takes no hydraulics away from pressing." - I guess Dan discovered free energy on this one:)

Dan did a conveyor:

Before than, an auger in hopper- http://propagelleprojects.blogspot.com/2014/02/auger-added-to-ceb-brick-machine.html

And mini tines in hopper - http://propagelleprojects.blogspot.com/2013/04/test-blocks.html

Thanks, this is good info. I've read a few of Dan's blogs but I want to go back and take a look at more. I have thought about a lot of these things, and that is correct I will probably have to make sure that I'm not compressing and mixing at the same time. I may even end up doing some kind of conveyor like this to use either after the mixer or to feed the mixer. The design of this mixer may make it a little difficult for my tractor to load it while it is mounted to the machine, since my loader is small. The diameter of the blades on this mixer should be 24in, if I remember correctly. I'm figuring on only loading the mixer about half way, but I'm not sure what it will be capable off. Just to keep the soil from bridging the auger may not have to be big at all, even closer to 10in diameter.

Just for future reference, I've seen some hoppers at asphalt plants that have conveyors under them. Sometimes, what they do on these large hoppers to keep them from bridging is that they have a "dancer" plate. The dancer plate is just one wall of the hopper that is hinged and is actuated to move in and out/oscillate. 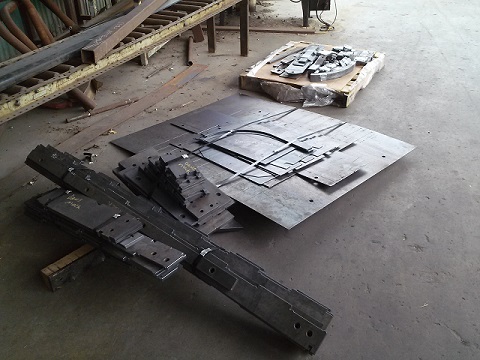 -I plan on building the brick press with a prototype mixer module. 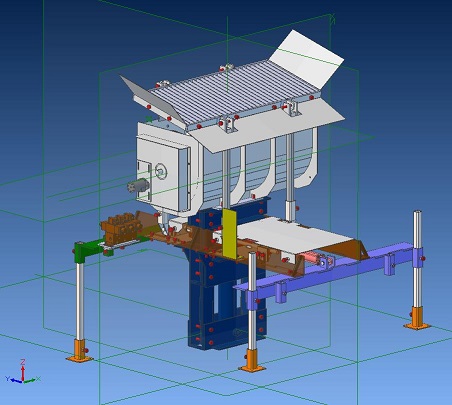 I have spent about 20 to 30 hours of the past few weeks in order to test the current capabilities of FreeCAD and also in order to learn the basics of FreeCAD. My impressions are that the FreeCAD team has accomplished a few things that only large teams of full time programmers have accomplished in the past. The conclusion I came to after doing my best to familiarize myself with all of the tools that are available in the latest release of Free-CAD is that until FreeCAD releases their planned "assembly module", designing a machine with multiple parts may not currently be a good fit for FreeCAD.

Right now FreeCAD would be my preferred open source program to design an accurate 3d parametric model of a part for printing or machining and for opening step files for some basic inspection. (the measuring tool seems to have limited ability to measure between lines and faces of parts only measuring from point to point) The latest version has even added the ability to make 2d drawings with title blocks and projections of 3d models. The sketching and extruding/cutting tools seem to be very powerful, but without using some fairly complex work-arounds, it's my opinion that it would not be possible to design individual parts based on the geometry of other individual parts in a reasonable amount of time.

I am very interested to see what the FreeCAD development team comes up with in the next few years. I was going to try to model a small assembly to show how freeCAD could help design a functional box whose parts could be exported to a lasercutter; but it became evident that, while possible, it would have required a few work arounds and more time than I currently have at my disposal. 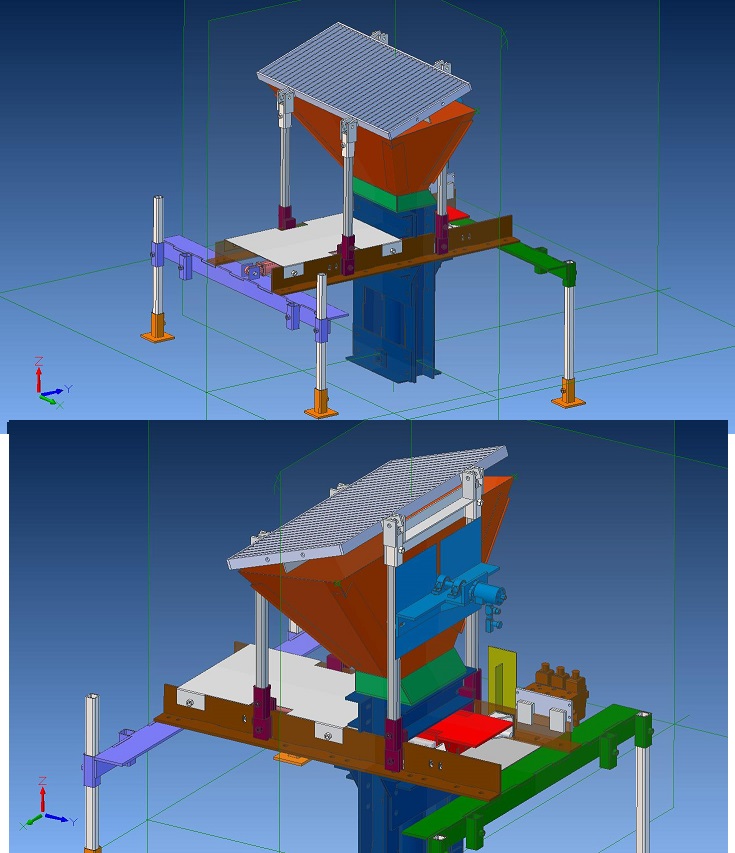 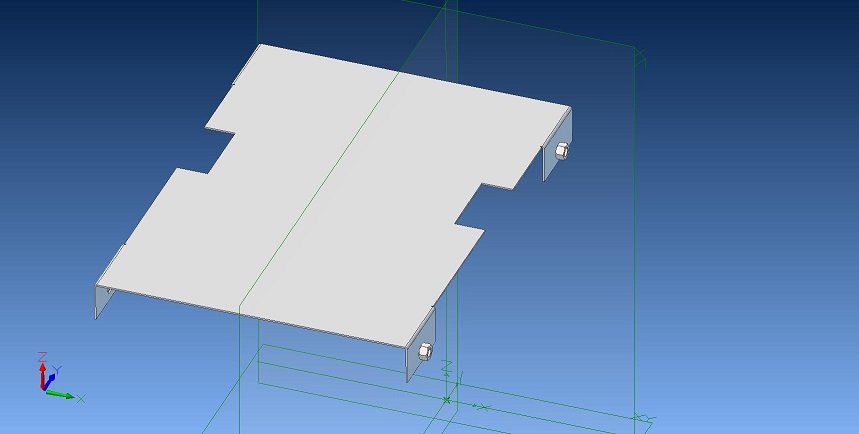 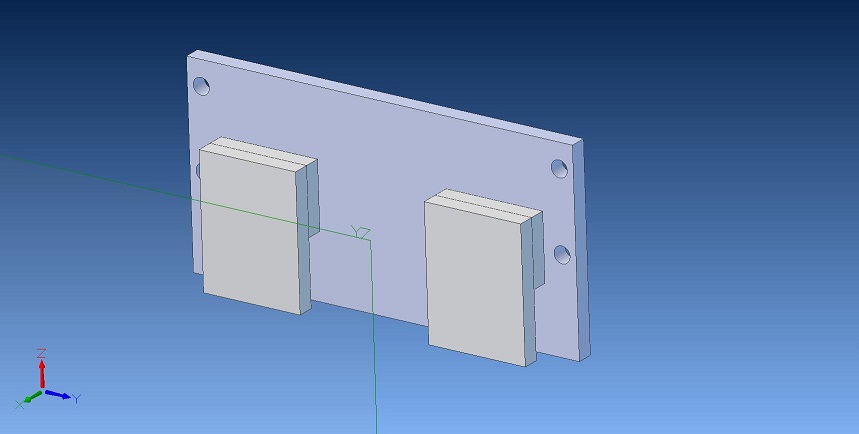 -NOT SURE IF THIS IS THE BEST WAY TO DO THIS HOPPER SUPPORT HOLDER, BUT THIS IS WHAT I HAVE RIGHT NOW 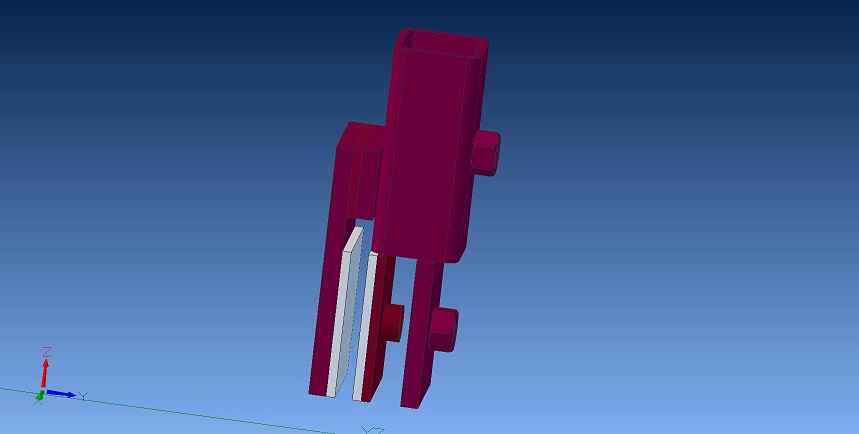 -1/2" STEEL MODIFIED, NEXT IS GUARDS AND GRATE 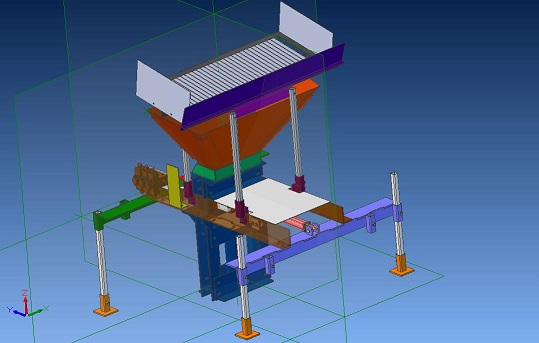 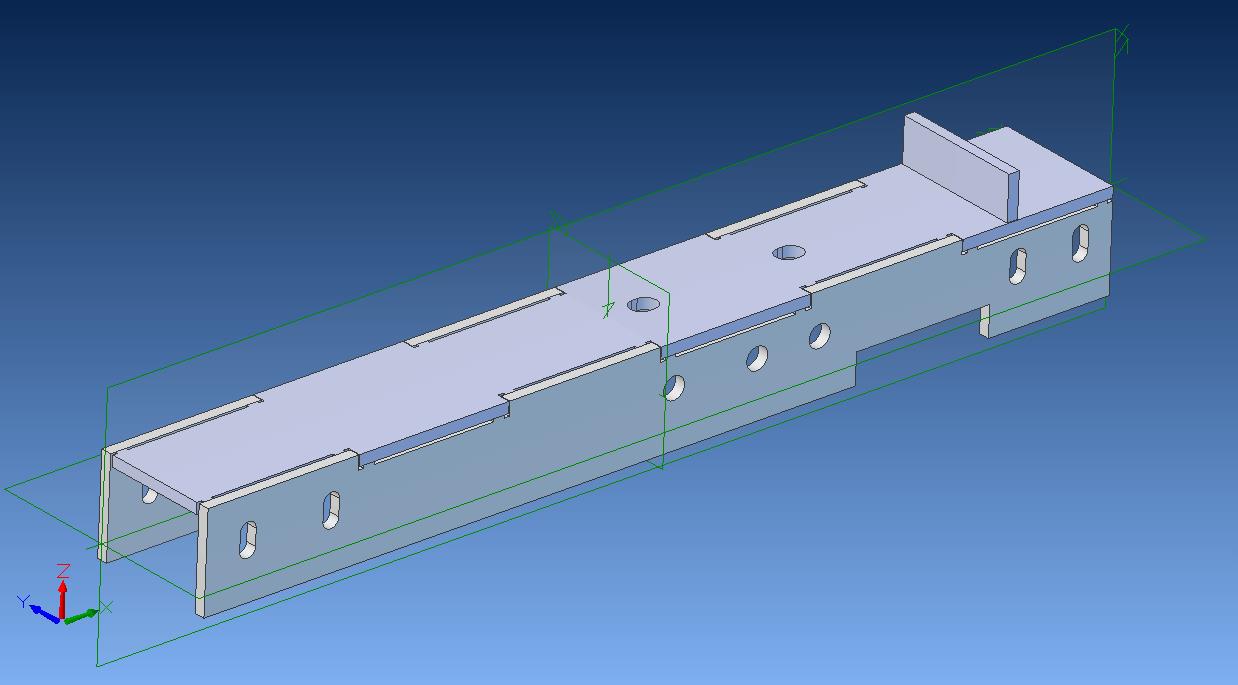 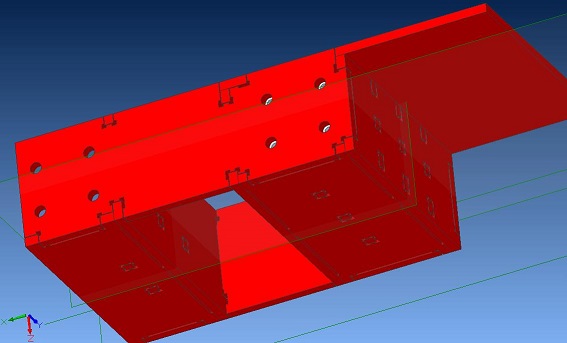 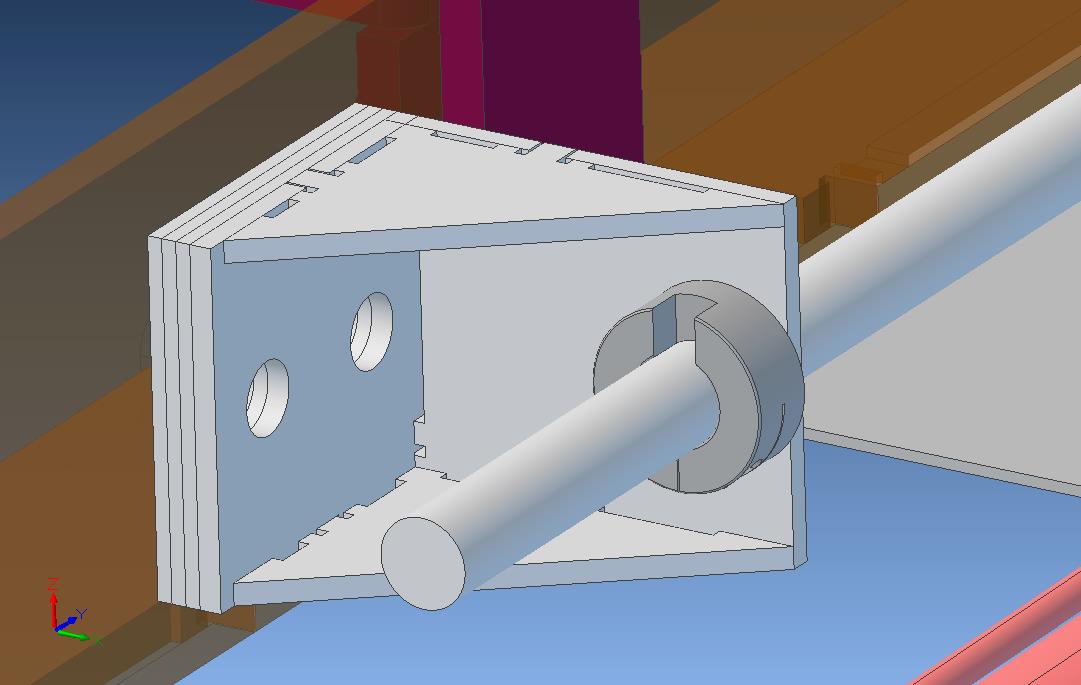 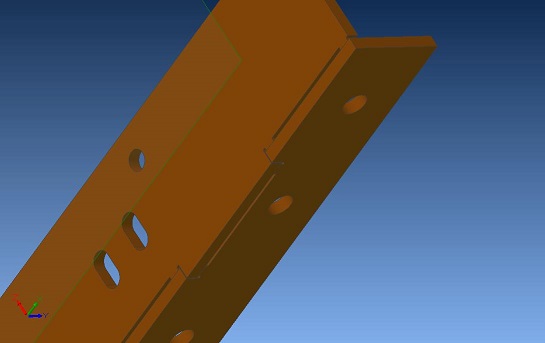 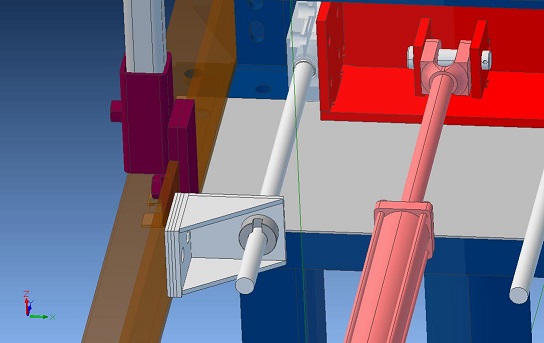 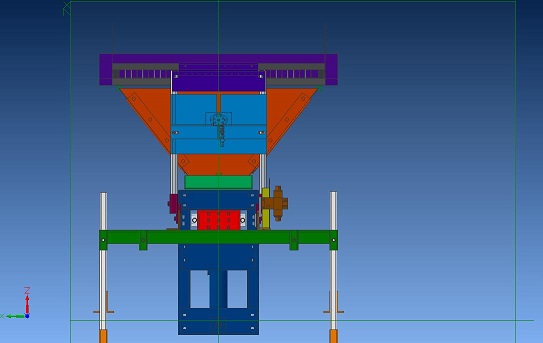 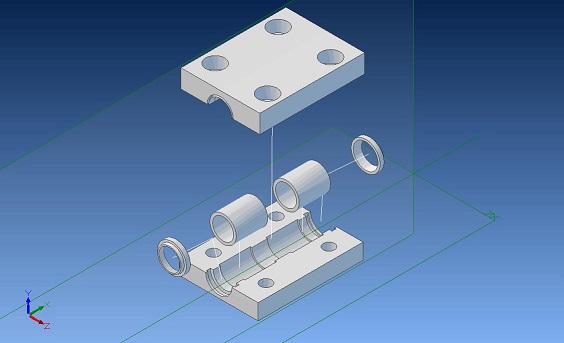 -MODIFIED FRAME TO SPREAD OUT 1/2" ON BOTH SIDES

-MODIFY LINEAR BEARINGS FOR 1IN SHAFT 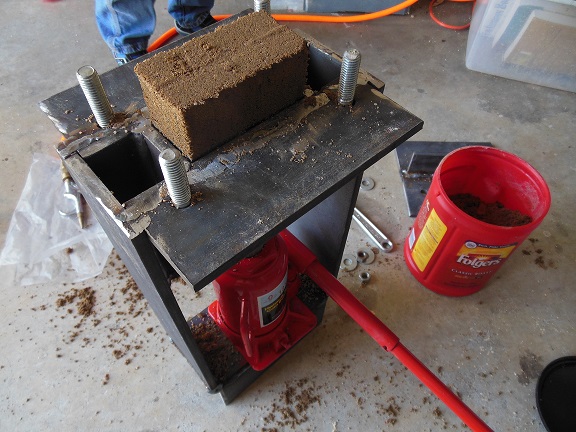 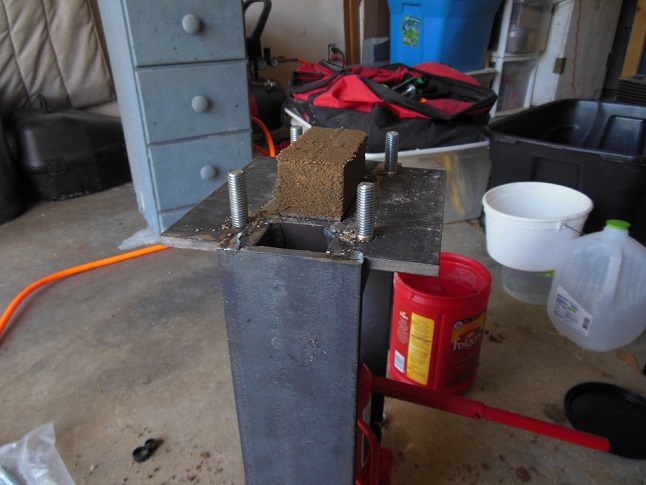 -STILL NEED TO PUT STL FILES ON THIS PAGE FROM BELOW

-THIS SHOULD CONTAIN UP TO DATE CAD FILES, DXF CUT FILES, ETC. 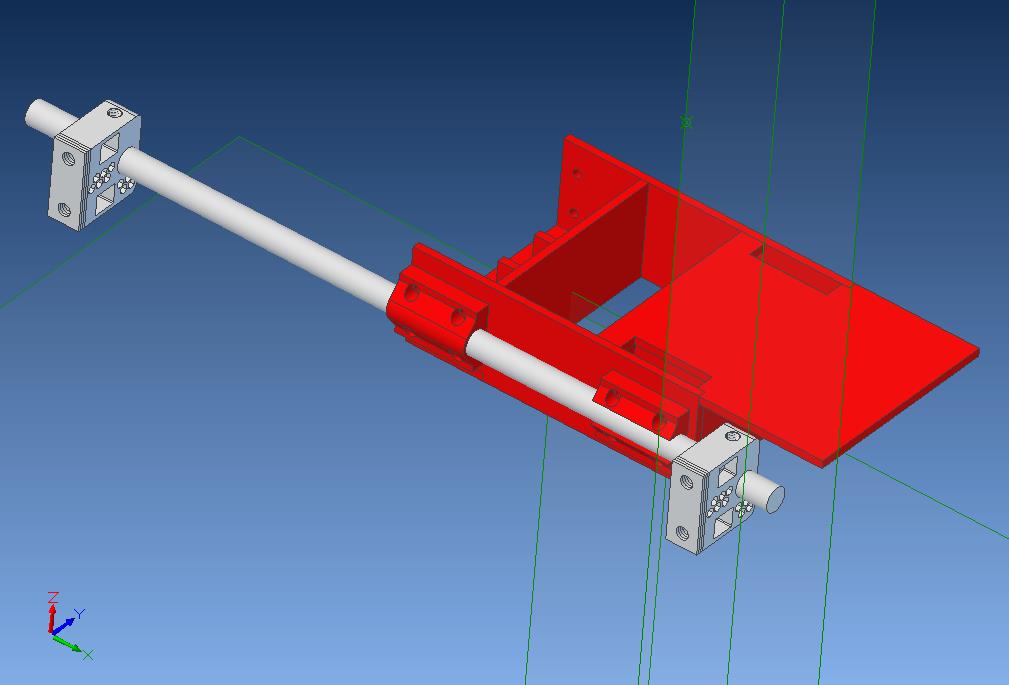 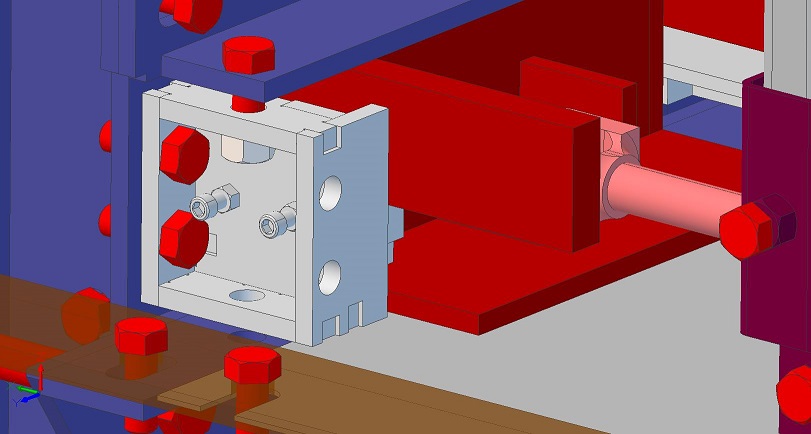 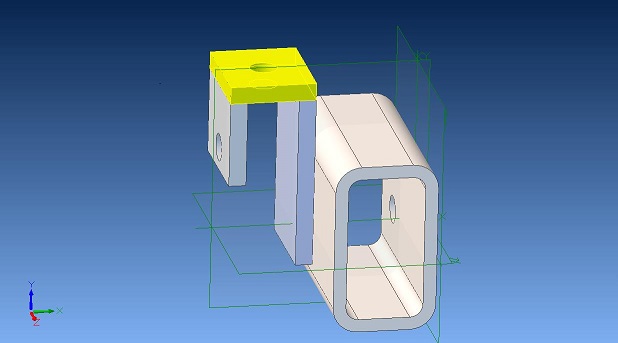 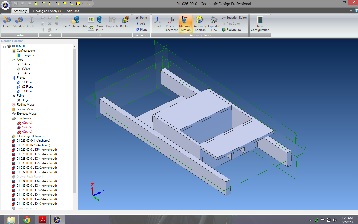 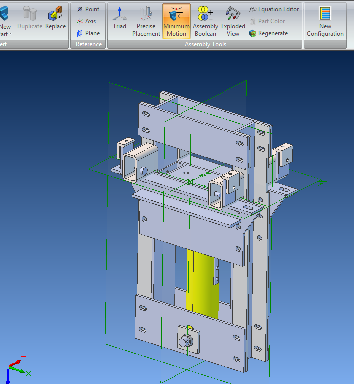